It's called the XV in Europe.

Jeremy Korzeniewski
There's a brand-new Subaru Crosstrek on the way for 2018, and the European version, known as the XV, is making its debut at the Geneva Motor Show. There's every reason to expect the new Crosstrek to be a stunning sales success. In 2016, Subaru sold 95,677 Crosstreks in the United States, easily besting models like the WRX, Legacy, and the Impreza upon which it's based. Those sales represented a 7.6 percent gain over the previous year, which is especially impressive considering that the Crosstrek is very much starting to show its age.

The mini-crossover inherits all the benefits of the latest Impreza, including a stiff new chassis that promises drastically improved driving dynamics. Following in the footsteps of the larger Outback, which is based on the midsize Legacy, the Crosstrek adds a bit more ground clearance and aggressive off-road-lite styling to the compact Impreza hatchback. Don't expect the Crosstrek to tackle the Rubicon Trail – Subaru says it will have "excellent rough-road capability" – but do expect it to sell in droves in areas that get significant amounts of snow. A 2.0-liter four-cylinder boxer engine delivers 154 horsepower to all four wheels through a continuously variable transmission. We generally prefer traditional stepped-gear transmissions, but Subaru has a history of keeping its CVTs pretty well behaved. Seven pre-programmed gear ratios can be selected by the driver in manual mode. A quick 13:1 steering ratio, active torque vectoring technology, and a lower center of gravity will all deliver dividends on the road, and 8.6 inches of ground clearance mean hard parts won't scrape the ground when the paved roads come to an end.

All new Crosstrek models will come standard with EyeSight, a safety system that includes pre-collision braking control, adaptive cruise, and lane-keeping assistance. Blind-spot detection, lane-change assistance and reversing assistance will also be available. Expect more information to filter out soon, and stay tuned for live photos when we hit the show floor in Geneva. The US-spec Crosstrek will make its debut in April at the 2017 New York Auto Show. 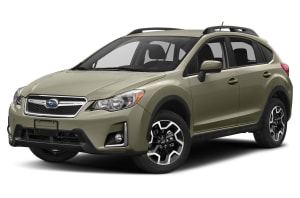