The Volkswagen I.D. Buzz autonomous EV is yet another microbus concept

Alex Kierstein
Microbus fans must be going nuts. On the heels of a long, long line of concept vans that haven't made it to production, Volkswagen will show off the I.D. Buzz concept at the 2017 Detroit Auto Show, and this is an early look (via some renders and advance information) at yet another microbus revival that we can't guarantee will actually hit the road. Count to ten, or whatever self-calming technique you utilize, and read on for more details.

If you recall, VW teased this concept a few weeks ago. And you probably remember the succession of concepts that preceded it: the 2001 Microbus concept, the 2011 Bulli concept, and last year's Budd-e (which it should be noted was less explicitly retro than the I.D. Buzz). None of these moved past the concept stage, and VW's apparently never seen indications that a new microbus would sell in sufficient numbers to produce it. 
Perhaps the modularity of the new MEB platform will make a difference. The system is very scalable, so that may tip the balance in favor of something like this I.D. Buzz making it to production in 2020 or after, when VW's MEB vehicles will reach production if all goes to plan. But at this stage, the I.D. Buzz is very much a concept, and you should take its "specifications" as optimistic conjecture.

Now let's dive into what VW has to say about the Buzz, which is a very conscious play on the word "bus". Get it? Subtlety is not this concept's point, but space efficiency is. Its aim is to show the flexibility of the MEB platform and its suitability as an AWD people-hauler – what they call a multi-purpose vehicle in Europe. It has an overall length of 194.6 inches, is 77.8 inches wide and 77.3 inches tall on a wheelbase of 129.9 inches. That's similar to the size of the European T6 Transporter, Volkswagen Commercial Vehicle's basic van and successor to the original VW bus, right in the middle of the dimensions of the short- and long-wheelbase T6, although the Buzz is a bit wider. So it's a size familiar to Europeans. There's up to 162.5 feet of theoretical cargo volume inside, and there's even a 6.1 cubic foot frunk (front trunk, as in an air-cooled Beetle or 911).

The concept powertrain – again, conjecture, grain of salt, all that – is claimed to make 369 horsepower and achieve 270 miles range on a "predicted US driving cycle". It utilizes a single front and dual rear motors, with a power conduit between them to distribute power front-to-rear. VW also says it'd be simple to fit only the rear motors to produce a rear-drive version. The concept battery is a 111 kWh unit.

VW also claims that if all goes to plan, the I.D. Buzz could be fully autonomous, thanks to four onboard laser scanners, ultrasonic sensors, radar sensors, side view cameras, and a front camera. 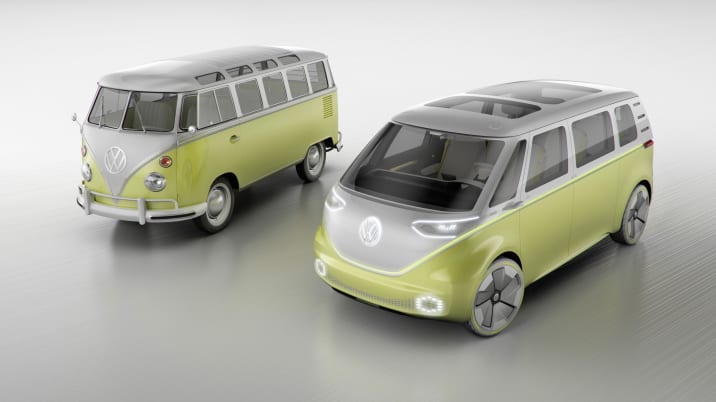 From a design standpoint, VW goes to some length to emphasize that the Buzz isn't a retro design, but just look at it. The two-tone front end with the large VW logo is a blunt homage to the T1 microbus. In fact, VW's even parked one next to a similar T1 in one of the renders it provided, to undermine its "not retro" point even further. Its attractiveness will be up to the beholder, but the I.D. hatchback-style headlights don't do the front any favors. The very slim, delicate taillights are a nice touch, however. Rather than the chrome trim of the original, the Buzz uses a character line of ambient lighting.

Inside there are many themes and ideas from the earlier I.D. hatchback and also standard autonomous people-mover touches, like reconfigurable seating, a retractable steering wheel, and augmented reality HUD. Thankfully, the rear seats can be configured into a bed, a standard trick for older minivans and a very useful feature for camping. Excuse the confusing terminology, but the Volkswagen I.D. user profile software, which tracks individual user preferences and settings from Volkswagen to Volkswagen, would also be used to cater the I.D. Buzz to its "driver's" preferences.

We'll have more on the Buzz concept from the show floor, so don't miss any of our Detroit Auto Show coverage.