The mortal:
Michele Mouton is an undeniable force to be reckoned with. She's brilliant and brave as a driver, but also she survived piloting the most menacing vehicles ever created by humankind. Her diversified racing career began in 1974 and continued through 1986. During her professional racing career she would race for many manufacturers including Alpine, Fiat, Peugeot and Audi.

Mouton was gifted with both a competitive spirit and the instincts and coordination of the greatest athletes. Throughout her career she would hone her skills on every conceivable road surface and condition. She would even helm monsters like the Lancia Stratos across Europe and even break the track record at America's Pikes Peak.

Undeterred by the mania of Group B's machines and fatalities...Mouton has proven to be a living legend. While difficult to imagine now, rally racing was in its "Wild West" era during the eighties and the competition was as fierce as the cars. All wheel drive was being implemented as well as the gratuitous use of turbochargers to the point of excess. Most of the cars could at best be considered "experimental" and at worst...death machines. However, Mouton's skill would dazzle viewers, her peers and enthusiasts for years. 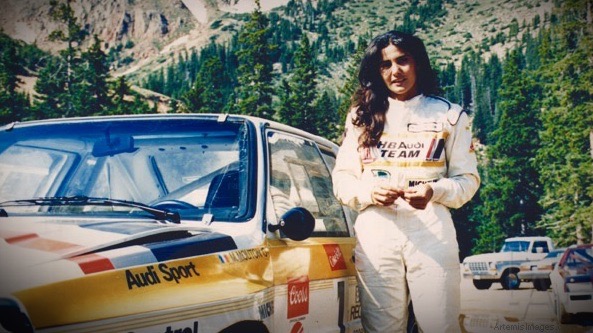 The machine:
The Audi Quattro was the embodiment of Group B rally racing. It would serve as a reverential successor to the innovative creations of Germany's pre-war Auto Union. The Quattro was created with the sole purpose of winning races in every driving condition. While the Quattro AWD systems would be used to market mass-produced Audi passenger cars...it was in competition that the name became iconic.

It's interesting to analyze the eighties from the standpoint of an automotive enthusiast. Because, once one does, it's shocking to observe the massive chasm between the street and race cars of the era. While the cities were riddled with rolling monuments of mediocrity, the racetracks were swarmed by fire-breathing, turbocharged locusts. The Audi Quattro relentlessly hammered the completion with the power of technology and sheer human will.

Significance:
Michele Mouton has courage and endurance beyond what's even expected in modern society. The civilized world doesn't demand that gladiators compete for their lives to meet their goals. Yet, Mouton succeed and her passion for the industry continues to this day. She has actively served as the president of the FIA's Women & Motor Sport Commission since 2010.

As an athlete Michele Mouton is, indeed, remarkable. However, as a glorious expression of the human spirit...she's immortal.