2018 Alfa Romeo Stelvio is like a taller, more practical Giulia

This is one pretty SUV. Did we just say pretty SUV?

Joel Stocksdale
With the Giulia on its way to dealers in the coming months, Alfa Romeo's third current model for the US market is close behind. The 2018 Stelvio will give the company an offering in the ever-popular crossover SUV segment, and should bring Alfa's signature style and driving dynamics to the party.

On paper, the Stelvio seems capable of delivering on classic Alfa fun. For starters it shares engines with the Giulia sedan, starting with a turbocharged 2.0-liter four-cylinder in the standard Stelvio and Stelvio Ti models making 280 horsepower and 306 lb-ft of torque. Alfa will offer a Quadrifoglio model as well, which has the same twin-turbocharged 2.9-liter V6 as the Giulia Quadrifoglio that pumps out 505 horsepower and 443 lb-ft of torque. The company claims that the Stelvio Quadrifoglio will get to 60 mph in 3.9 seconds, just a tenth behind the Giulia. Regardless of trim level, every Stelvio sends power through an 8-speed automatic transmission connected to Alfa's Q4 all-wheel-drive system. A mechanical limited-slip rear differential is available, and the Quadrifoglio adds a torque-vectoring rear differential. The drivetrain propels an aluminum-intensive chassis. The doors, fenders, front and rear frame assemblies, and various suspension components are all made of the lightweight metal, contributing to a near 50/50 weight distribution front and rear. Suspension is independent all the way around, and the Quadrifoglio gets a sportier, adaptive version. 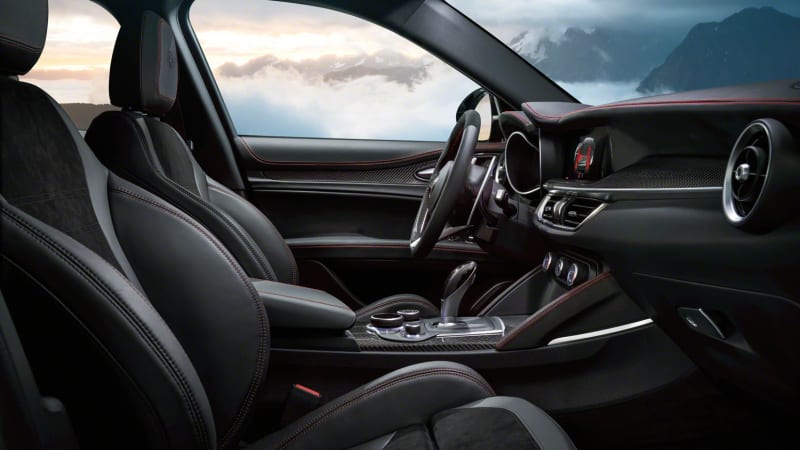 Styling-wise, the Stelvio also lives up to the Giulia. In fact, it looks more or less like a tall Giulia wagon. The front fascia is roughly the same, just with a taller center grille and slightly more swept back lower sides. The slope of the nose is much less raked, too. The character lines along the flanks and even the rear bumper are all very similar to the Giulia Quadrifoglio. The one part that isn't as successful, though, is the tail end. It appears Alfa tried to give the Stelvio a gently sloping hatch, but the result is a bulbous backside with lot of sheet metal.

Inside, the Stelvio again echoes its sedan sibling, though in this case the top of the dash peaks above the center screen and slopes down to the right vent. In the Giulia, the top of the dash drops down immediately from the gauge cluster, and only rises again at the right vent. Speaking of gauges, the Stelvio features a 7-inch screen nestled between the tach and speedometer, the latter reading up to 200 mph in the Quadrifoglio. In the center stack, standard Stelvios get a 6.5-inch display, while the Stelvio Ti and Quadrifoglio upgrade to 8.8-inch units. The Ti also adds real wood trim. All Stelvios also come with leather seating, and the Quadrifoglio adds Alcantara to the mix and available Sparco seats with carbon fiber shells.

Alfa didn't reveal when the Stelvio will arrive at dealers, nor did it give an estimate for pricing. But we hope it won't take quite as long to show up as the Giulia, for a couple of reasons. One, it could be a big money maker for Alfa. Two, if it delivers on a fraction of the enjoyment of the Giulia, we want to drive it as soon as possible.