There's been an Alfa Romeo Giulia-shaped hole waiting to be filled in the American car market for what feels like forever. A couple years ago, Alfa rejoined the US car party with the flawed but hugely entertaining 4C, reigniting passions after a decades-long absence but leading to little in the way of sales volume. That single offering acted only as a tease for those wanting a properly practical, five-person sports sedan. After a true-to-Italy leisurely wait, the Giulia has arrived.

The 2017 Alfa Romeo Giulia puts some practical meat on the bone for American drivers bored of the usual Audi A4/Mercedes C-Class/ BMW 3 Series suspects. Even better, the new Italian-made sedan comes packed with some heavy artillery, the top Quadrifoglio model offering 505 horsepower and returning a 3.8-second 0–60 mph run as well as a shockingly quick Nürburgring Nordschleife time of 7:32 – which, for the record, makes it the fastest four-passenger production car around the 12.9-mile circuit. For context, that's six seconds quicker than a Lamborghini Gallardo LP570-4 Superleggera, and a full 20 seconds faster than a BMW M4. 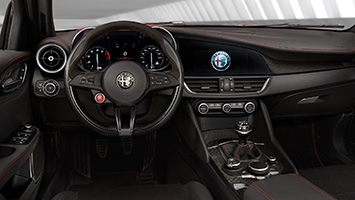 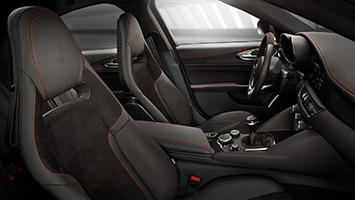 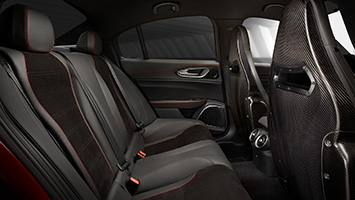 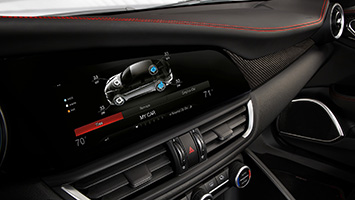 Our first taste of the highly anticipated Giulia brought us to Sonoma Raceway and some local roads nearby in California's wine country. As we approach the pack of cars warming in pit lane, there is further evidence that the Giulia Quadrifoglio is serious: its Ferrari-derived 2.9-liter twin-turbo V6 sounds snarly and sweet, and cars passing on track report raspy exhaust coughs between shifts.

When you go to get in, there's a slight chance of bumping your head on the low-slung roof – wouldn't be an Italian car without an ergonomic quirk, right? The test car appears to be equipped with a full gamut of options: leather across the dash, carbon-fiber trim breaking up the bovine bits, an Alcantara- and leather-covered steering wheel, and the standard eight-speed automatic (the only transmission option for US-market Giulias). This is a distinctly Italian execution, with unique details like green and white top-stitching. But there are also splashes of conventional design throughout, including the analog tach and speedo with a multifunction screen positioned between them, and a steering wheel flanked by tall aluminum shift paddles that are attached to the column and remain stationary. A center console-mounted dial selects the drive modes (D for Dynamic, N for Natural, A for Advanced Efficiency, and Race), and a button in its center lets you choose suspension stiffness. Only a few details disappoint, like the hard plastic on the inside of the center console, plasticky bits on the shifter, and a somewhat loosey-goosey feel to the control wheel used to navigate the multimedia menus.

Press the red engine-start button on the steering wheel, and the pleasing thrum of the twin-turbocharged mill comes without any artificial enhancement (thank you, Ferrari). You'll need to pull the shifter down to choose first gear (tapping the paddles does nothing while the car is in Park), but once moving, the Giulia feels every bit like a sports car first and a sedan second. With a steering ratio of 11.8: 1 – which, Alfa says, is the quickest in the industry – the Giulia turns instantly, the Pirelli PZeros digging into pavement and changing the car's direction with slot car-like directness. The chassis is quite a bit stiffer than those of the competition – think M3, C63, and ATS-V – appealing to a smaller but more fervent cross-section of the enthusiast population. And although the Giulia lacks a carbon-fiber chassis like the 4C's, but there is no shortage of sharpness in the full-tilt Quadrifoglio model: The relationship between steering and body is highly direct, responsive, and intuitive, and the excellent steering feel builds a confident dynamic between driver input and vehicle response.

However, the driving conditions were less than confidence-inspiring. With steady rainfall, 505 hp, ultra-high-performance Pirellis with a treadwear rating of 60, and standing water on stretches of the track, it's no wonder the Giulia's tail has a habit of stepping out on medium throttle. The low-end torque isn't exactly thunderous – this is, after all, an aggressively tuned small-displacement engine that produces a staggering 174 horsepower per liter – but longer stretches of tarmac reveal the engine's true peaky behavior. It pulls strongly through the last 3,000 rpm or so until hitting the hard rev limiter at around 7,200 rpm. 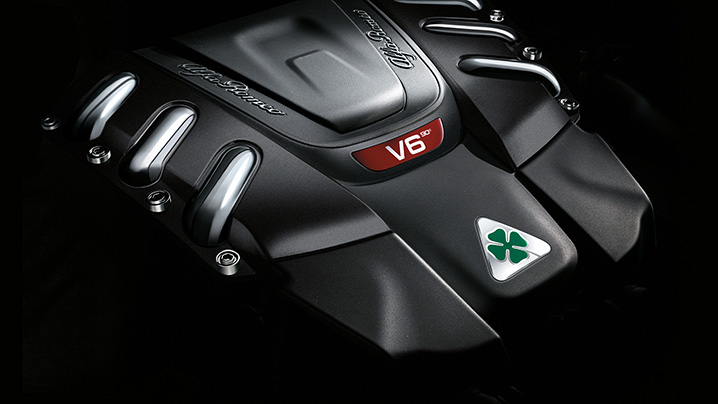 The entry-level Giulia and Giulia Ti, both of which use a 280-hp 2.0-liter four, are available with all-wheel drive. The Quadrifoglio is rear-drive only and uses a torque-vectoring differential that helps a little when traction is limited. We were strongly discouraged from engaging Race mode due to the conditions, as it defeats stability control, but even in the second most aggressive mode, "A," there wasn't much opportunity to gauge what performance would be like in the dry. Based on how the rear end steps out and is quickly, almost stiflingly recovered by traction control, it's evident that it would take a bit of skill to coax a good lap time under dry conditions. Then again, Race mode might be brilliant enough to allow suitable yaw angle without putting a damper on forward motion; given Alfa's restrictions on the track drive, we'll have to reserve judgment until we score more seat time. Either way, the car takes skill. One thing that stands out on the track: the optional carbon-ceramic brakes have tremendous bite and excellent stopping power, which enables surprisingly late braking on the damp surface.

If the rain-drenched track excursion uncovered only a fraction of the Quadrifoglio's performance capabilities, the road drive revealed even less. As you might expect in such a tightly wound sports sedan, potholes and surface irregularities can be jarring, even in the softer suspension settings. Between exhaust note, throttle response, and steering effort, there's quite a bit of variability between the three main driving modes, and we found the middle setting with the suspension at its softest best suited for most roads. The preternaturally quick steering demands attention (and careful corrections), but the hyper-responsiveness can become an acquired taste that encourages more driver involvement and, ultimately, more enjoyment from the act of carving up a canyon. Interestingly, the brake-by-wire system is linked to the drive modes, offering stiffer pedal feel in the two most aggressive settings – so much so that you might need to think ahead while parking, since it takes extra effort to stop from a low-speed creep. 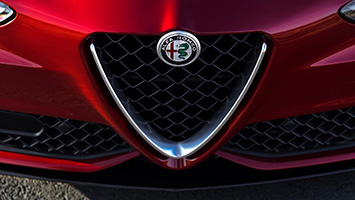 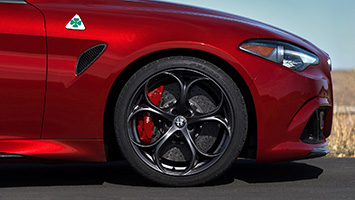 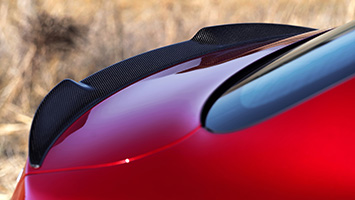 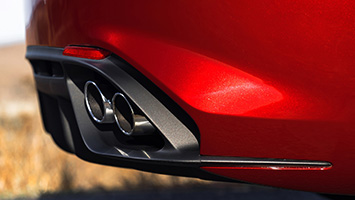 The eight-speed transmission shifts reasonably well in automatic mode, though shifts get jerkier when the big aluminum paddles are tapped (Alfa brass says this was a tuning choice, in order to add a feeling of responsiveness). Shifts take around 100 milliseconds in best-case scenarios – not quite industry-leading, but certainly made up for by the Quadrifoglio's generous 443 pound-feet of torque, which peaks between 2,500 and 5,000 rpm. Techier than the transmission is an electrically actuated front lip spoiler, which extends at speeds above 75 mph to deliver more than 200 pounds of extra downforce on the nose. The car feels extremely planted in the high-speed sections, so it seems to do its job.

We also took a brief street drive in a 280-hp Giulia Ti with Q4 all-wheel drive. The car was optioned with the Lusso package, giving it an attractive if more conventionally outfitted interior with light walnut trim and pale beige leather. The Ti's 18-inch wheels provide a far less punishing ride than the Quadrifoglio's 19s, but the more accessible model's main distinction primarily lies in its dramatically more usable powerband. Thanks to the more well-rounded tire compound and all-wheel-drive system, traction control is almost never triggered, allowing you to drive more aggressively and extract strong acceleration from the four-cylinder turbo engine. Alfa estimates a 0–60 mph time of under 5.1 seconds, and in the real world (i.e., wet, bumpy roads), that translates to progressive acceleration under medium throttle, and satisfyingly strong pull when you goose it. It lacked the soul-stirring engine sounds and ultra-high-performance feelings inspired by the top dog Quadrifoglio model, though. 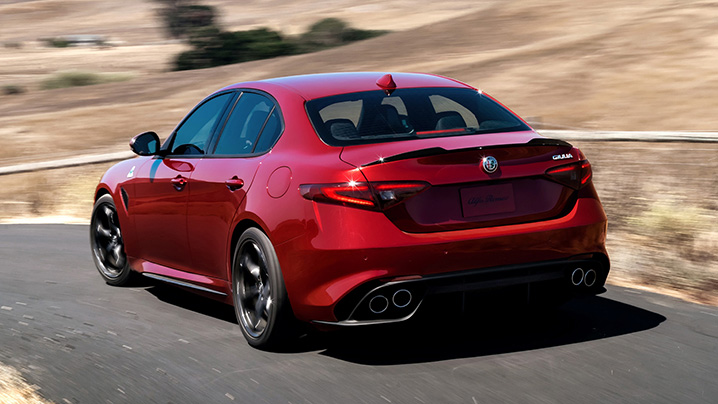 The Alfa Romeo Giulia has been eagerly awaited because it is such a dramatically different sports sedan proposition compared to the hot-rodded offerings from Audi Quattro, BMW M, and Mercedes-AMG. Sure, it has usable rear seats and a trunk just like its competitors, but the full-blown Quadrifoglio version departs from the formula with its ultra-quick steering, focus on handling, and brappy engine. And yes, arriving late to the party has also enabled the feisty Italians to tune their mill so it's the gruntiest of the litter, barely edging out the AMG C63S's by a mere two horsepower. It may not be the most evolved, refined, or polished entry in this field, but the Alfa Romeo Giulia is perhaps the most entertaining and driver-centric of the bunch, making it well worth the wait for those who hope to stand apart from the crowd.

This article has been updated to clarify US-market transmission offerings.