You'll have to squint to tell it's different. Volkswagen has revealed the updated European-market Golf, but you'd be hard pressed to tell the difference unless you were a die-hard VW fan. And even then it would be tricky. The bumpers front and rear have been tweaked. The taillights are now fully LED, with nifty animated turn signals similar to those on Audis, and the optional Xenon headlights give way to LED versions. However, these modest exterior changes hide much more significant changes inside the cabin and under the hood.

The new Golf and GTI both get some noteworthy powertrain updates. The standard Golf now offers Volkswagen's turbocharged 1.5-liter four-cylinder with cylinder deactivation and a variable geometry turbocharger. This high-tech engine comes in two versions, one with 148 horsepower and 184 lb-ft of torque, followed by a higher-efficiency 128-horsepower BlueMotion variant. However, according to a VW representative, the 1.5-liter engine won't be coming here initially. If it ever comes here, expect VW only to bother bringing over the 148-horsepower variant.

The updated GTI is more probable for the US, though. In Euro spec, it gets a healthy power boost to 227 horsepower on the standard model (up from 210 hp), and up to 242 hp on the Performance version (up from 220 hp). We'll definitely be looking forward to that. VW's new seven-speed dual-clutch transmission also appears in all new Golf models, and it will gradually replace the six-speed version. 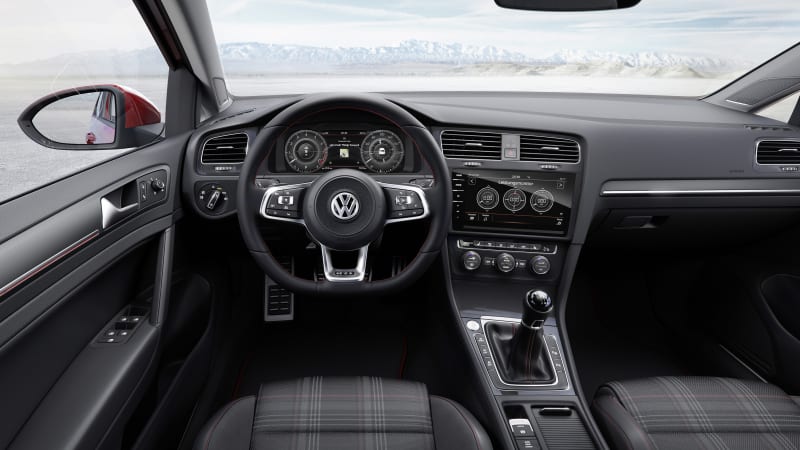 New Golfs also get substantial changes inside. The interior itself is mostly the same, but it now contains large screens. The instrument cluster has lost analog gauges completely in favor of a digital display like those in some Audi vehicles. The center stack also gets larger screens on every trim level, with the largest measuring in at 9.2 inches. This top-level screen gets complimentary touch buttons for controls such as volume. We hope it works better than Honda's design. The new infotainment system will feature gesture control, too.

On the subject of technology, the Golf gets a few more safety and convenience features. The big draw is the Traffic Jam Assist on dual-clutch transmission models. This will allow the car to crawl in traffic and stop on its own, giving the driver a bit of break in gridlock. Volkswagen also announced the introduction of front collision assistance with pedestrian detection, and a trailer-assist system. We doubt that last one will cross the Atlantic.

The updated Golf will launch first in Europe. The US will follow, with the car being introduced in time for the 2018 model year, so expect it sometime next year. This update will also keep the Golf up-to-date while the company works on the next major redesign.