It's sticky in Hana, and the mosquitos are thick in the air, going after any exposed skin. Heavy rain has saturated the volcanic soil, and we're waiting at the bottom of an impossibly steep wall of pumice gravel. Our guide notes that pumice can't be stacked artificially at this angle; only natural erosion can pile it to overcome its angle of repose. Everyone waiting at the base of the hill swats at mosquitos and nods. The road to the top is sopping wet from a night of heavy rain, and too muddy for even these capable trucks to climb. The hope is that rising heat and perhaps even the appearance of the shiftless sun will work some moisture out of the hill that leads to the top of said pumice slope, to dramatically demonstrate the 2017 Toyota Tacoma TRD Pro's remarkable descent control function. Nature is always in control, and the key to success – whether climbing a mud-slicked hill or sliding down an improbable slope – is patience.

So we wait. By afternoon, it's game on, and I get to try my hand at making the descent in a sacrificial TRD Pro, the wheels scrubbed hard by abrasive pumice the whole time. The afternoon is a remarkable demonstration of the evolutions of the Tacoma's capabilities. That evolution comes with a cost – not just the bug bites, but in terms of price. This mid-sizer is, to put it bluntly, extremely expensive. As our short time on Maui demonstrated, it's also impressive.

Even in these distracting surroundings, the Tacoma TRD Pro grabs attention immediately. The latest Tacoma's styling is handsome in the same way the big-rig-aping second-generation Dodge Ram's was, if perhaps less pure. It's like someone mixed testosterone into the modeling clay. And the TRD Pro-specific details are tasteful. There's a hood scoop snagged from the TRD Sport model, set off with a matte black decal. It's nonfunctional but looks sharp. Toyota geeks or the nostalgic (or, better yet, nostalgic Toyota geeks) will appreciate the classic "TOYOTA" lettering that replaces the tri-oval logo in the grille. Embedded in the bumper are neat little auxiliary lights developed by Rigid Industries – to make them useful but still DOT-compliant, Rigid built in a two-element lens that casts light to the side like a fog light but also farther in front like a driving light. Since the sun never set on our adventure in these trucks, I can't tell you if they work well in addition to looking good.

My favorite current Tacoma color is still the morbidly named "Quicksand," which is sort of a military khaki, but you can't get that on a TRD Pro. Instead, you're limited to a bright and boring white, a tasteful dark red, and the compelling milky clay Cement color. The latter looked particularly good spattered with mud, scrambling through twin tracks roughly scratched into the lush tropical hillside. 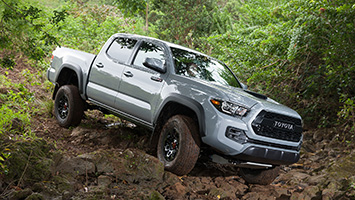 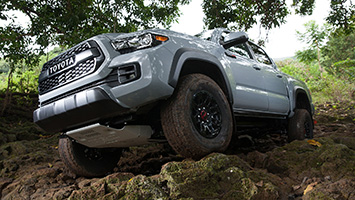 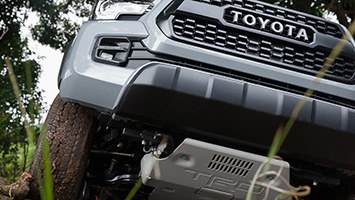 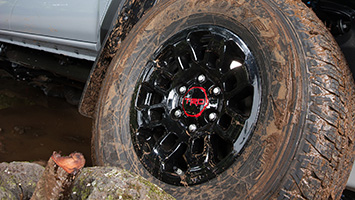 And scramble it did, thanks to a light menu of alterations. None of them apply to the powertrain; Toyota's familiar 3.5-liter V6 is standard and makes 278 horsepower and 265 pound-feet of torque, which is enough grunt to do the job. This V6 has the neat ability to switch from the Otto cycle to Atkinson at will to save some fuel, just like it does in the normal Tacoma and other Toyota vehicles. It does exhale through a TRD cat-back stainless exhaust system, which gives the TRD Pro a mellow but compelling purr.

Automatic-equipped trucks get a standard helical limited-slip center differential, as well as the very cool Crawl Control that allowed us to enter into a controlled slide down that pumice slope. A manual transmission is available, and those trucks are exclusively equipped with the familiar A-TRAC brake-based traction control system – that means no Crawl Control on the manual trucks. All TRD Pros come with an electronic locking rear differential for added grip.

Toyota carved what amounted to a mud-paved short track in the middle of a field, and so after the pumice adventure I headed there to slide around at higher speeds. Both manual and automatic TRD Pros are competent enough in the mud, although it's frustrating that the manual truck cuts power in some situations when it detects wheel slip. With the four-wheel-drive system's low range engaged, that nanny is disabled. 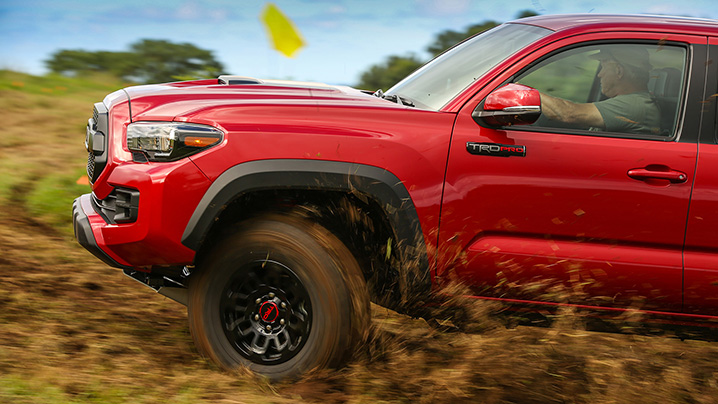 Most of what makes this TRD a Pro is below the beltline. The last-generation Tacoma TRD Pro used Bilstein shocks, but that company couldn't build what Toyota wanted for this new one. So Fox produced a set of shocks that, when paired with TRD front springs and progressive rear leafs tuned for this application, give the truck a phenomenally good ride in chopped-up turf at moderate speeds. They also provide a very slight front lift, about one inch in total. The shocks soak up and moderate sharp impulses, so the truck bucks and tosses considerably less when moving at a good clip than a lot of serious off-road specials. In a truck with a less-sophisticated suspension, it's the sort of thing that'd make your passengers sick. None of that here.

The other TRD Pro additions are appreciated too. There's a thicker skidplate that – finally – incorporates an access door so you can change your oil without having to yank the panel completely off. That's been a longstanding customer request, the Tacoma's Chief Engineer, Mike Sweers, told us. There's also a nice amount of TRD icing inside, such as comfy leather-trimmed seats with TRD Pro logos, a TRD shift knob, and the competent if not very sexy Entune premium infotainment system. The integrated GoPro mount proved useful to get some video of the truck in action as wel. Like its non-TRD Pro stablemates, this is a comfortable and well-equipped mid-size truck. 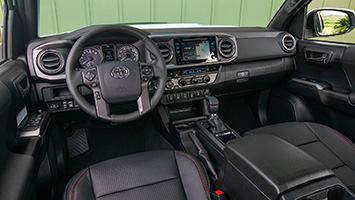 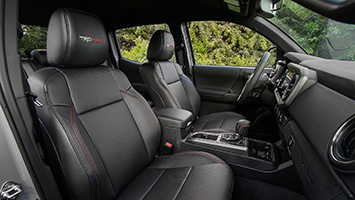 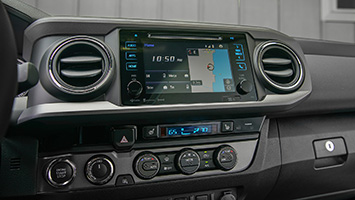 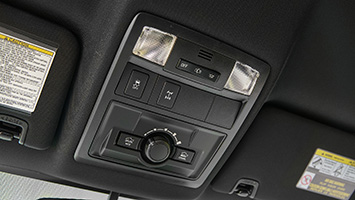 Toyota also fitted some very tasteful 16-inch black TRD wheels with enough offset to widen the track by an inch, although they're wrapped with a compromise tire. The Goodyear Wrangler All-Terrain Kevlar rubber is aggressive for an original-equipment tire, but it's left in the dust by the stuff that owners would chose to buy for the kind of terrain they play around in – tires like the BFGoodrich All-Terrain KO2, which, incidentally, the 2017 Ford Raptor gets as original equipment. Despite the Goodyears' on-road bias, the Tacoma spent most of the day gripping instead of slipping, with only the wet hill in the morning stymying us. Some KO2s or KM2s would solve that problem, and should probably be on the to-buy list for anyone actually looking to visit locations with boulders or deep mud along the way. But that's just more money a TRD Pro owner will have to think about spending.

And spending is the name of the game with the TRD Pro. All this TRD Pro kit, and in particular the Fox shocks, adds up to a much better Tacoma, and there aren't any items we'd leave off. And yet, they bring an already expensive mid-size pickup to the price point of disbelief: the Tacoma TRD Pro, which is incidentally only available as a Double Cab model, starts at $41,700, or $5,405 more than a TRD Off-Road 4x4 Double Cab with the same V6 engine and no additional options. You wouldn't get those excellent Fox shocks or TRD visual accouterments in the TRD Off-Road trim, but it does come with upgraded Bilstein shocks, an electronic rear locker, and Crawl Control. On the other hand, the Off-Road does lack the presence of the aggressive Pro, which is as important a consideration as the excellent suspension. 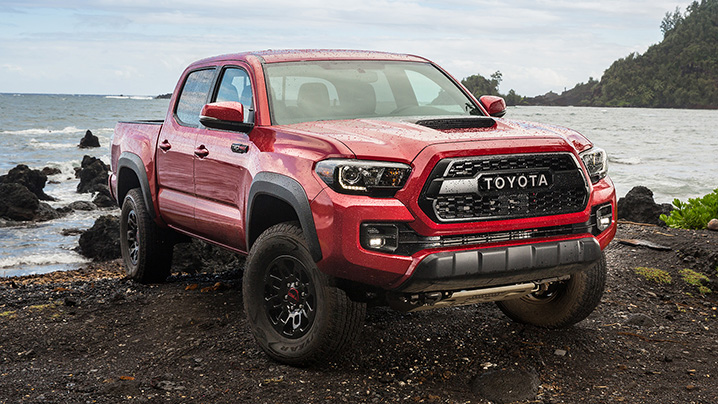 It'd be nice if the Tacoma TRD Pro had some direct competition, both for reasons of consumer choice and to exert some pricing pressure through competition. Unfortunately, there's not much to speak of. The Nissan Frontier Pro-4X is ancient, and while considerably less expensive also offers less capability and sophistication – it's more on par with the TRD Off-Road trim. GM's mid-size twins, the Chevy Colorado and GMC Canyon, are great trucks and offer the appealing, torquey Duramax diesel option. You can even add the relevant off-road package on diesel Canyorados, but at a significant cost. They creep up close to the TRD Pro's MSRP, and this is all before GM has even pulled the wraps off the more comparable ZR2 package that is coming soon. As good as the Fox Shocks are on the TRD Pro, they might not be a match for the ZR2's incredibly cool spool-valve jobs.

Enough hand-wringing about price, though. Until the Colorado ZR2 comes along, the Toyota is the only game in town without stepping up to another size and price class entirely (say, to the Ford Raptor, at $7,820 north of the TRD Pro's MSRP). The aftermarket can certainly fit the TRD Pro with some grabbier shoes, which at the moment is the Pro's only weakness, and not a very significant one at that. With more aggressive rubber, the TRD Pro will become a true dual-purpose off-roader: confident off the asphalt, comfortable on it. If you want to get out in the sticks in a pickup that won't make your passengers sick, right now the smooth-riding and capable TRD Pro is your truck.