Yes, car comics do belong in an art museum

CARtoons magazine was an eccentric graphic anthology, published regularly if sporadically (monthly, quarterly, bi-monthly, bi-quarterly) by famed automotive publishing house Petersen from 1959 until 1991. As its name implies, it featured cartoons about cars, but it was imbued with the kind of slapstick and winking editorial commentary on issues like politics, the generation gap, and technology – as well as rampant sexism and misogyny – familiar to readers of contemporaneously published periodicals like Mad.

Now, following in the footsteps of other formerly unsung media that have entered into the high art canon—photography, industrial design, fabric arts, furniture—comics are getting their due via inclusion in notable cultural institutions. The Milwaukee Art Museum launched a groundbreaking exhibit of comic art a decade ago. New Yorker cartoonist Roz Chast was recently the subject of a retrospective at the Museum of the City of New York, as was graphic novelist Art Spiegelman at the Jewish Museum. Now, the Los Angeles County Museum of Art (LACMA) is following suit, in a manner befitting its location in car-centric L.A., with a six month-long exhibition of prints, cover art, and ephemera from CARtoons' decades-long run.

"This show tells not just the story of these important elements of west coast car culture, or the lost history of these great and talented artists," says Britt Salvesen, LACMA's head curator of photographs, prints, and drawings, who organized the show. "It tells the story of graphic design from before computers." She points at the original drawings and paintings that line the gallery's walls, tacked up bulletin-board-style as they would be in a print magazine's editorial offices. "They show all the paste-out, and Letraset, and Ben-Day dots, the physicality of the process of creating something before digitalization." 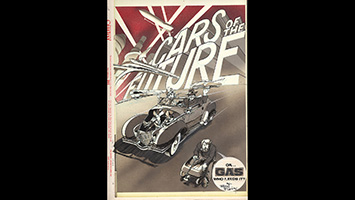 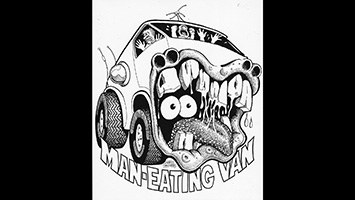 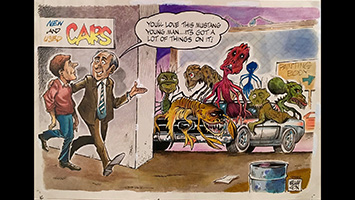 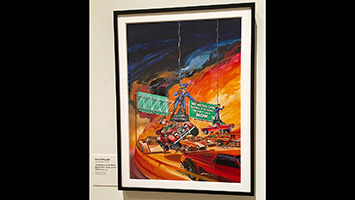 Salvesen points at the large horizontal vitrine that takes up much of the middle of the room, filled with relics of the vanished world of plentiful and broadly distributed newsprint. "And it shows the history of things like the iron-on decal and the mailbag, items that were once standard, but are now mostly lost."

Like old comics from Playboy or Boys' Life, the cartoons' content is almost universally obscure and un-funny to a contemporary audience, valid mainly as a nostalgic totem of some bygone ideology, but they are striking as artifacts of their time. Most date from the Sixties and Seventies and are thus saturated with earth tones, obtuse insider references, and onomatopoetic exhaust burbles, as well as exaggerated fins, drag slicks, blower stacks, and décolletage and derrieres. There are also the requisite "How To Draw An X" tutorials and mail-in drawing contests that were once a staple of the genre.

Salvesen says that the exhibition came about in a rather serendipitous way, while she was curating the massive Tim Burton show that ran at LACMA in 2009. "I was talking with Albert Cuellar, who worked in art design and fabrication for many of the Tim Burton movies, and it turned out that he used to be an intern for CARtoons. He came in with stacks of these old drawings he'd saved when he worked there, and I just became fascinated with them, with their history, and with the ways in which they've influenced generations since." 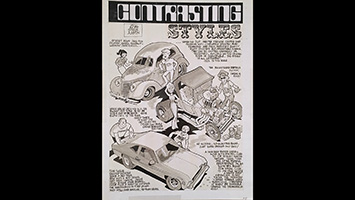 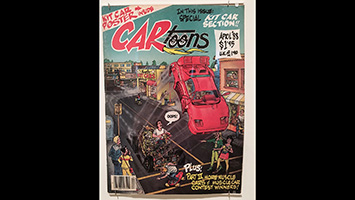 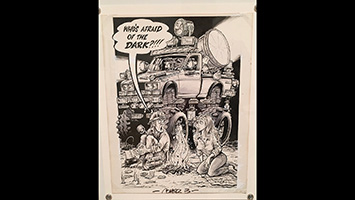 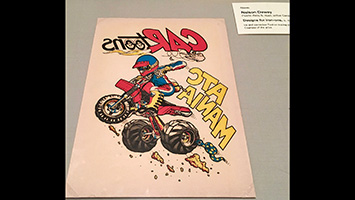 Salvesen lists a number CARtoons contributors who went on to greater fame within the graphic world or outside of it, such as Zap Comix alum Robert Williams, film and TV art designer William Stout, and Monty Pythonite Terry Gilliam. She then points at an original cover art drawing by Dave Deal, which hangs on the gallery's wall. "John Lasseter from Pixar was such a fan of the magazine as a kid that when he was developing the Cars franchise, he hired this CARtoons artist Dave Deal to be a consultant."

The exhibit is a blast to look at (and a blast from the past for anyone who grew up during the tragic, waning days of the Space Age.) But beyond this, it is also a reminder of the necessity of the preservation of physical objects, in our sophisticated digital era, where we live with the intriguing contradictions of endless content, diminished attention spans, and inexhaustible (if at times exhausting) archives.

"We don't have to worry so much about a Rembrandt decomposing because it's painted on durable materials," Salvesen says. "These cartoons underscore the ephemerality of the paper of the Twentieth century. We have to treat them not just as artistic objects, but as materials worth preserving."

She smiles. "The artists that loaned us their work brought them in to us in humble cardboard boxes or file folders that they'd been keeping under their bed or in their attics, so they got a big kick out of it when we put on our white conservators' gloves to examine them."