Volkswagen has been selling cars in the United States for 61 years. It's sold quirky cars, small cars, vans, and a few crossovers with odd names. Some are iconic. Some are obscure. A few have been toxic. Except for a few sold during periods of high fuel prices, none of them have ever truly matched the precise needs of American buyers. If the company has its way, that ends now. Meet the 2018 VW Atlas crossover.

This new three-row has room for up to seven passengers, a strong VR6 engine, and available all-wheel drive. Wrapped in boxy styling with prominent wheel arches, big lights front and rear, and lots of masculine lines and creases, it's the most American-centric vehicle VW has ever conceived.

"This is the biggest and boldest Volkswagen we have ever built in the United States, delivering the distinctive design and craftsmanship we're known for, now with room for seven," Hinrich Woebcken, CEO Volkswagen's North America region, said in a statement. "The Atlas marks a brand-new journey for Volkswagen to enter into the heart of the American market."

VW will begin assembling the Atlas in December at its expanded factory in Chattanooga, TN, and it will go on sale next spring. It uses the company's MQB architecture and measures 198.3 inches long, 77.9 inches wide, and 69.6 inches in height. By comparison, the 2017 Ford Explorer is the same length, 78.9 inches wide, and 70 inches tall. The Explorer, Dodge Durango, Toyota Highlander, Chevy Traverse, and Honda Pilot will be its chief rivals.

With those strapping utes as benchmarks and targets, VW went all out to create an SUV that wouldn't be embarrassed. The Atlas offers a 3.6-liter narrow-angle six-cylinder engine rated at 280 horsepower or a 2.0-liter turbocharged four-cylinder that makes 238 hp. Both come with an eight-speed automatic transmission. Volkswagen's 4Motion all-wheel drive is an option on the six-cylinder model. The AWD system can be configured depending on the driving conditions. Fuel economy ratings were not released. 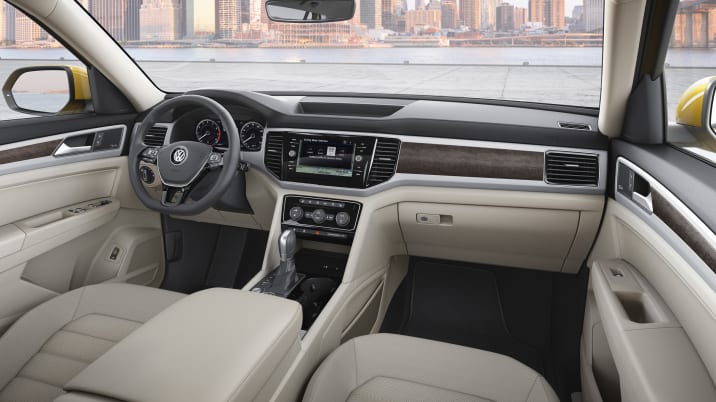 The third row, arguably the most critical feature of the Atlas, has room for two adults. The seats fold forward on rails, easing entry, exit, and storage. We've sat back there ourselves – next to Woebcken, no less – and it's comfortable and accessible, as advertised. Up front, the driver gets an optional configurable digital cockpit. VW's Car-Net suite includes the App-Connect feature that pairs smartphones with Apple CarPlay, Android Auto, and MirrorLink technologies, and the most sophisticated Fender audio system the company has ever offered. Safety features include lane-departure warning, adaptive cruise control, forward-collision warning, and parking assist. It also offers a post-collision accident system, which VW says activates the brakes when the airbags go off in a bid to lessen the damage.

The Atlas offers standard LED headlights and daytime running lights, and optional LED taillights. They punch up a design that looks vaguely like those of its competitors, yet still remains true to VW's traditional styling language – there's some Touareg and Tiguan in there. These images are the first look at a vehicle that has been previewed by the CrossBlue and Cross Coupe concepts and was teased in company videos. Finally uncovered completely, it's a safe yet appealing design, exactly in line with its key competitors.

That was also our initial impression when we drove an Atlas prototype on a forested off-road course near the Tennessee-Georgia border in late August. It was a limited stint, but the vehicle displayed strength, was comfortable over the dusty, dirty trails, and was intuitive to operate.

With uncertainty still swirling over the diesel-emissions scandal, Volkswagen needs a winner – something to completely change its image and bring in new buyers. The timing couldn't be better. Volkswagen has long thought globally, though that has often meant it never truly understood the US market. Finally, Atlas gives Volkswagen a real chance in America.