An age-old Audi engine technology for a new generation. A five-cylinder engine is an odd duck in the modern automotive world, so why put it under the hood of a sophisticated sports car like the 2018 Audi TT RS? We're posing this question to an engineer when a loud, guttural sound interrupts the conversation. A TT RS blasts by, growling and percolating as it shoots down the front straight of the historic Circuito del Jarama in Spain. Oh, that's why.

The RS treatment brings the sound and the fury to the TT, transforming a cute, sporty little car into a sports car with mettle. With 400 horsepower channeled to all four wheels, a stiffer suspension, and styling flourishes like organic LED taillights, the RS makes for a big-time upgrade over the 292-hp TT S and the mild-mannered 220-hp TT. Who wants a four-cylinder, anyway?

We're considering the five-pot's potential as we mash the throttle and explode onto Jarama, an old Formula 1 course that still looks ready to host top-level racing. There's a couple of long straights and lots of curves and elevation changes. Sure, it's a bit trite to praise a sports car after a few laps in a controlled setting, but the TT RS has legit performance chops. The engine sounds just as good inside the car as it does to spectators, and it's more satisfying since we're the ones provoking the five cylinders to anger as we approach triple-digit speed.

It's all real, too. There's no pumped-in sound or fake flatulent exhaust. "It's the unadulterated sound of the engine – we didn't change it," says Philipp Ade, Audi technical project manager for powertrain. Speaking trackside through an interpreter, he admits the exhaust system adds resonance but also filters out other noises to produce a clean engine note. Trust us, you'll want to tune in. 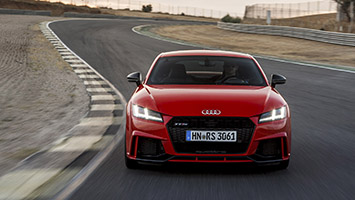 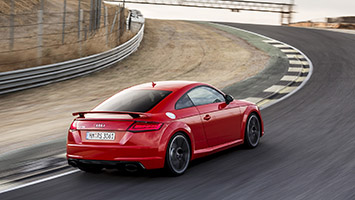 The five-cylinder is not a glorified sound check. It's a new engine developed for Audi's smaller performance cars, though the TT RS is the only one confirmed for the United States. The 2.5-liter mill uses aluminum for its block and crankcase and magnesium for the oil sump. This all results in a 57-pound weight loss compared with the old five-cylinder, which was last sold in the US market in the previous-generation TT RS for the 2012-13 model years. That car was brought to the states after a Facebook campaign. This time there was no doubt Americans have an appetite for the hottest TT.

A non-enthusiast will wonder: why the fuss over a five-cylinder engine? To Audi and its band of loyal followers, it's a defining element of performance. Audi introduced the first modern gasoline-powered five-cylinder in 1976 and effectively used it in World Rally competition and at Pikes Peak. It honed the design, adding carburetors, creating a diesel version, and then bolting on turbochargers. The engine in the TT RS is the culmination of 40 years of know-how in a segment the rest of the industry largely ignores. The new model uses a single turbo developed with BorgWarner and has direct and manifold injection. Geeked-out enough yet? The cylinders fire in the order of 1,2,4,5,3. 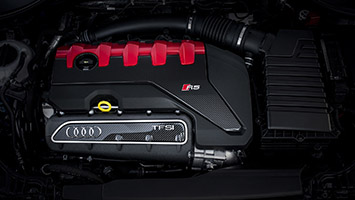 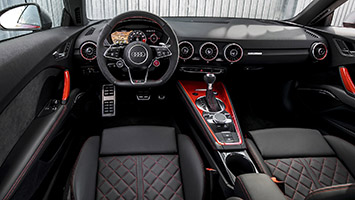 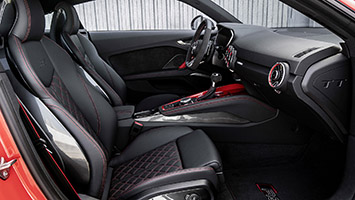 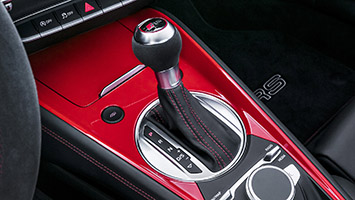 Tech specs can blur and history means nothing if there isn't modern execution. The new engine will be rated at 400 hp in the US, Audi officials say, and it's expected to produce 354 pound-feet of torque, making for a 3.7-second sprint to 62 miles per hour. We tried launch control at Jarama, and that time feels realistic, even conservative. We push a few buttons. Clamp our left foot on the brake, put the throttle to the floor and let go of the brake at 3,500 rpm. Next thing we know we're at the other end of the straightway without any tire slippage or chirping. It's a hell of a good time, with almost no practical application, though that hasn't stopped every company from loading up its sports cars with features like this. Launch control adds to the aura of the TT RS. It's hugely powerful, has Quattro all-wheel-drive, and stays planted on the track almost regardless of what we do. The chassis is taut and buttoned down. We can slide the car slightly, but that's just for fun. When our lines get sloppy we drop the hammer and blast toward our next apex. It's crude, but effective.

On the road, the TT RS can be as relaxed or frenzied as we demand. The ride is athletic and dialed-in, yet not abusive. We cue up Dynamic mode via a selector inside the steering wheel, just like the setup in the R8, and accelerate on the A1 highway around Madrid. Quickly, we're in the Spanish countryside, whipping through tight turns and switchbacks. The steering feels light as we fall into a rhythm, bolstering our confidence. Eye of the Tiger comes on the radio randomly. We lay on the throttle as the five-cylinders yell over the strains of Survivor. It's hard not to grin.

Unfortunately, the skies open up, and soon we're back at cruising speeds. This is when the TT RS shows its softer side. The cabin (see the Short Cut below) has carbon-fiber, suede, quilted patterns on the leather seats, and a Bang & Olufsen stereo. The Virtual Cockpit is an impressive interface. It condenses the buttons, knobs, and screens to only show what's essential. We've been impressed with the feature for more than a year. On this day, the colorful navigation works flawlessly, shepherding us through rural roads while providing a gorgeous map display that illustrates the changing topography. When the weather clears we soak in views of the vistas surrounding our route. Tall, slate gray rock formations rise out of the ground meeting the dark clouds still looming overhead. It's a perfect setting to test a sports car like the TT RS.


Enthusiasts, however, have choices for those exhilarating moments on the open road, Spanish or otherwise. The TT RS enters a crowded segment with toys that can be found at a variety of price points. The Audi will come in around $60,000, so it's still playing in the luxury segment. It outguns the carryover 385-hp Cayman GT4, which is the beastliest Cayman you can get for far less money ($85,650). The newer 718 Cayman (350 hp) starts at $67,350. Slightly undercutting the Audi, the BMW M2 with 365 hp begins at $52,695, and way down the ladder the Ford Focus RS and its 350 hp stickers for $36,775. Each of these cars has its own riff on performance. The Audi is arguably the most-well rounded, with the most power, an attractive interior, and all-wheel drive.

That said, the BMW with its rear-wheel power and manual transmission is one of the purest sports cars we've driven in recent memory. If you're a 2002 fan boy, the TT RS' power won't sway you. Same with the Caymans. These cars' mid-engine layouts offer a dynamic that even the 911 can't match. Enthusiasts with means probably won't do a line-item comparison with the Focus RS, but it's the only serious all-wheel drive player Audi faces.

The TT RS only comes as a coupe with the seven-speed dual-clutch S tronic gearbox in the United States. No manual transmission like the last time, and no convertible like European markets get. Like its five-cylinder engine, the TT RS is a rare bird. It's expensive, powerful, and a Quattro-reinforced riot to drive. Enthusiasts are fortunate to have plenty of options for their toy collections. This one is like no other. As the TT RS proves, five cylinders definitely still have a purpose.