A good impression of German performance at a red-white-and-blue price.

In 1989 Ford crammed a 7,000-rpm Yamaha V6 into the Taurus and made the SHO, one the greatest sleeper sports cars ever to come out of Detroit. Fast-forward to today and the modern Taurus SHO is a big luxo-cruiser, not Dearborn's answer to European sport sedans. But, to paraphrase Yoda, there is another. The 2017 Ford Fusion Sport is stylish, has 325 horsepower and all-wheel drive, and uses an engine from a pickup truck. God bless America.

Yes, the 2.7-liter, twin-turbocharged EcoBoost V6 was first used in the F-150. This powerful six-cylinder is making its sedan debut with the Fusion Sport and will soon be available in the Lincoln Continental. And it's a magical, fast-revving engine that's never short of performance, which makes sense – there's 325 horsepower and 380 pound-feet of torque to play with. Tapping into that power while sitting in a Fusion's seat, looking at a Fusion's dashboard, and hanging onto a Fusion's steering wheel is as surprising as waking up one morning and finding yourself a foot taller.

The Fusion is quick despite the rest of the powertrain. Ford's six-speed automatic gearbox qualifies as "meh," responding better to a boot full of throttle than to requests from the steering-wheel-mounted paddles. In both normal and Sport Mode, manual mode returns quick-ish upshifts but is slow and dimwitted on the rev-matched downshifts Ford was touting. We found the Fusion behaved better in full automatic, where the where the computers control shifting and mitigate some of the transmission's bad behavior. Score one for the standard six-speed manual in the BMW and Audi. Sorry, Detroiters.

The all-wheel-drive system, meanwhile, betrays the Ford's humbler roots. Neutral cornering performance plays second fiddle to preventing torque steer (which it does admirably). The system doses the rear axle with 50 percent of the engine's output and it can't transfer torque laterally. We wouldn't complain if Ford fitted the Fusion with the trick torque-vectoring AWD from the Focus RS, but that would probably raise the price (and give you less reason to by the 400-hp Lincoln MKZ that does have it). Still we like an all-wheel drive that show more ability to aid dry handling. It's an area the S4 and its trick torque-vectoring sport differential scores points in that the Ford can't match. 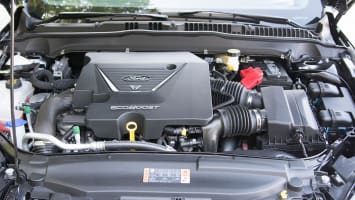 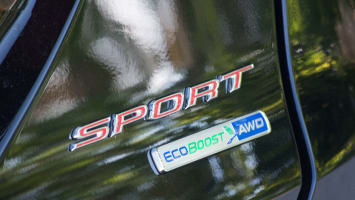 After the initial shock wears off, you'll find that using the Fusion Sport's straight-line performance is addictive. The engine's brisk and potent response spins the tachometer needle at a decidedly un-Fusion-like clip; we complained about turbo lag from the 2.7-liter V6 in the F-150, but didn't notice any issues in the Fusion. We're expecting a low-five-second run to 60 mph, far quicker than any other mainstream mid-size sedan. So in terms of numbers we're already putting the Fusion Sport up against the Germans, but it's not as speedy as the Audi S4's 4.9-second run or the BMW 340i's 4.6-second sprint.

The 2.7-liter V6's exhaust note is pleasing enough that we'll almost forgive the simple all-wheel drive and lackluster transmission. It's rich and pleasant in normal mode, where active noise cancellation handpicks only the best sounds. But push the diminutive Sport mode button in the center of the rotary shifter and the Fusion's computers turn off the noise cancellation and let in the V6's operatic singing voice. The sound climbs smoothly, reaching its sweetest note in the middle of the tach. But the soundtrack is only exciting under load – let off the gas and the engine hushes up. We'd like to hear some pops, crackles, and excitement from those four lovely chrome exhaust pipes.

The quad-tipped dual exhausts are some of the many stylish additions Ford made to differentiate the Sport model from the rest of the lineup. The last time Ford built a Fusion Sport, in 2010, the visual changes were less obvious. For instance, all 2017 Fusions get unique grille treatments, and the Sport's black honeycomb inserts stand out from lesser models in a way the 2010 model's chrome schnoz could never manage. With less chrome – just a thin strip remains around the main grille, and it has been deleted from the fog light surrounds – the new Sport's face is subtly imposing. The standard "Tarnished Dark" five-spoke 19-inch wheels give the profile presence, but they aren't much better than the standard Fusion's attractive wheel styles. 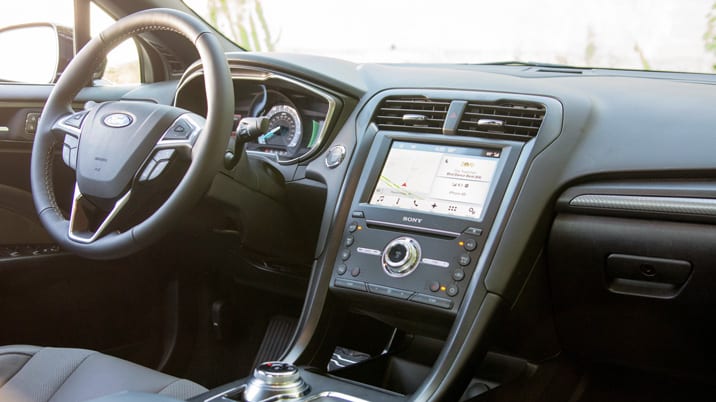 Whereas the Fusion Sport looks and drives better than its slower siblings, its cabin falls short. The gray Miko suede/leather seats look great but need more bolstering. The steering wheel's soft leather and attractive contrast stitching look nice, but a flat-bottom design or a thicker rim would do more to reinforce the sporty aesthetic. And the smaller accents disappoint, too – compared to the pricier Fusion Platinum's extra leather and stylish, handsome stitching, the faux carbon-fiber accents on the Sport's dash and suede inserts on its doors look ho-hum.

We can't make the same complaints about the Sport's Continuously Controlled Damping suspension. Previously offered on a range of Lincolns, CCD draws on data from 12 sensors to tweak the suspension every two milliseconds – according to Ford, if the front tire encounters the edge of a pothole, the system can adjust the front dampers to their firmest setting before hitting the next edge and "pre-warn" the rear suspension of the impending impact. The results are mixed. While the system manages low-to-medium-amplitude, high-frequency bumps – railroad tracks or washboard dirt roads – extremely well, the dampers' handling of bigger impacts, like potholes, isn't all that different from the suspensions on other mid-size sedans.

The suspension firms up pleasantly in Sport Mode, even compared to the optional adaptive dampers from BMW and Audi. On some of the best driving roads in southeast Michigan, the Fusion Sport can carry a surprising amount of speed through bumpy turns while the body stays flat and unperturbed. The suspension copes well under hard braking, too. But even on rough roads the sharper ride isn't a huge step down in comfort from the standard suspension setting. Spending an entire day commuting in Sport Mode won't cause backaches. A stiffer suspension tune could help the handling, however, which could help the Fusion in comparison to the S4 and 340i. Despite similar curb weights – the Fusion weighs just under 4,000 pounds compared to the mid-3,800-pound BMW and Audi - the Germans offer a more entertaining and dynamic handling experience. 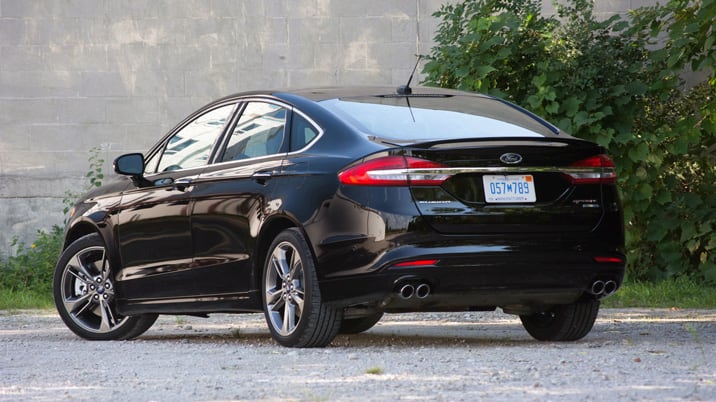 Pricing for the Fusion Sport starts at $34,350. That undercuts its closest relevant competitor, the V6-powered Honda Accord Touring, which lists for $34,830. Budget shoppers could check out the far-cheaper $27,435 Hyundai Sonata Sport 2.0T, although it's missing all-wheel drive and gives up 80 hp and 120 lb-ft of torque for the Fusion. Of course, options raise the Fusion's price fast. Add the $2,000 401A options group (ambient lighting, dual-zone climate control, a 12-speaker Sony stereo, and Sync 3 with navigation), the $1,625 Driver Assist Package (automatic high beams, blind-spot monitoring, a heated steering wheel, and lane-keeping assist), the $995 Active Park Assist system, and the $1,190 adaptive cruise control system, and your Fusion, like our test car, is nudging past the $40,000 mark.

At that price the Fusion Sport is still a relative bargain, especially relative to the Germans, just like the original Taurus SHO. The Fusion Sport isn't the driving instrument that you'll get from Ingolstadt or Munich, but Detroit does a good impression of a sports sedan in a stylish, all-American package that offers many of the things Germany asks a premium for – adaptive dampers, for example. Normally, we'd suggest you just suck up your patriotism and get the Audi or BMW, but the Fusion Sport is a compelling, attractive, and most importantly, affordable alternative that only gives itself up in the toughest of dynamic situations.