A stiffer chassis and upgraded engines mean a stronger truck.

Ford has released specs for the 2017 Ford F-Series Super Duty and the figures are impressive. The automaker announced that its 2017 F-450 is capable of towing a maximum of 32,500 pounds with a gooseneck trailer, which is 1,300 pounds more than the previous truck. By switching over to an all-aluminum body, Ford was able to cut 350 pounds compared to the previous model, while reinforcing and strengthening the entire truck. The F-450's maximum gooseneck towing capacity boils down to its all-new, fully boxed frame. Using 95 percent high-strength steel, the frame is 24 times stiffer than before.

In addition to the lighter and stronger body, the 2017 Super Duty's engine lineup gets a bump in performance. The 6.7-liter turbodiesel Power Stroke V8 still puts out 440 horsepower, but torque rises to 925 pound-feet of torque – up from 860 lb-ft. The 6.2-liter gas V8 also gets a modest bump in torque from 405 lb-ft to 430, which Ford is claiming as best-in-class, with power staying the same at 385 hp. Ford hasn't announced pricing or availability for its "class-leading" Super Duty trucks yet, but the information should come out in the near future. 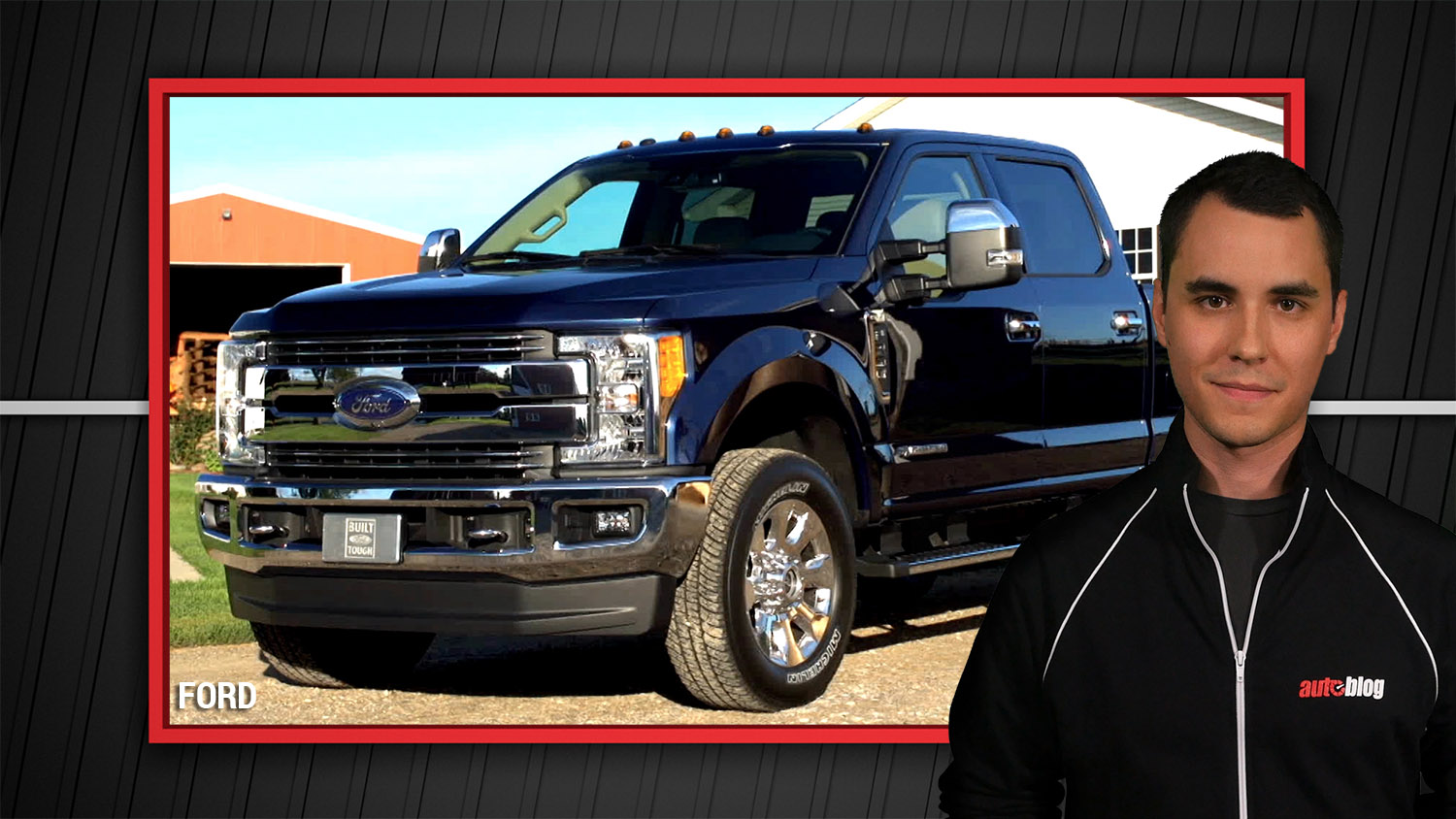 -Most capability: All-new F-Series Super Duty can tow heavier trailers and haul heavier cargo than ever before, with maximum gooseneck towing capacity raised to 32,500 pounds on F-450, fifth-wheel towing capacity boosted to class-leading 27,500 pounds and conventional towing to class-leading 21,000 pounds; maximum payload now rated at up to best-in-class 7,630 pounds

-Most confidence: Class-exclusive smart technologies help make towing easier and enable increased confidence, including BLIS® with trailer tow, adaptive cruise control that works with the heaviest trailers, and Trailer Reverse Guidance to help back trailers up

DEARBORN, Mich., July 18, 2016 – Ford, America's truck leader, is taking heavy-duty trucks to the next level with the all-new 2017 F-Series Super Duty – empowering customers with the most towing and hauling capability and the most horsepower and torque of any heavy-duty pickup truck.

Super Duty's enhanced capability starts with high-strength, military-grade, aluminum alloy and high-strength steel that help reduce weight by up to 350 pounds. Ford reinvested that weight savings in more robust components everywhere it counts to give customers more towing and hauling capability than ever before.

Foundational improvements for every Super Duty pickup truck include an all-new, fully boxed frame that is more than 95 percent high-strength steel and up to 24 times stiffer than the previous frame to support increased towing and hauling. The all-new high-strength, military-grade, aluminum-alloy body is more dent and ding resistant than the previous steel body.

"This is the best heavy-duty truck we've ever made," says Doug Scott, Ford truck marketing manager. "We listened to our customers and created the toughest, smartest and most capable Super Duty ever."

The future of towing is now
The 2017 Super Duty is the undisputed leader in towing, offering available best-in-class performance in all towing categories, plus smart technology no other competitor has to enable greater confidence when towing.

Maximum gross combined weight rating for truck and trailer now tops out at a class-leading 41,800 pounds. That is more than half the maximum weight of an 18-wheeler semi-tractor trailer combination on most federal highways.

This industry-defining capability is matched by never-before-seen towing technology. Super Duty is the first truck to offer adaptive cruise control and collision warning with brake support for heavy trailers, allowing truckers to traverse steep mountain grades while maintaining speed – even with a trailer weighing 32,500 pounds.

A center high-mounted stop lamp camera provides visibility into the cargo box, which is especially helpful when hooking up gooseneck and fifth-wheel trailers. An Ultimate Trailer Tow Camera System uses four digital, high-definition cameras to give the driver a 360-degree bird's-eye view surrounding Super Duty. Trailer Reverse Guidance provides visual cues and tips to help ease backing up a trailer. A first-ever factory-available trailer camera can be custom-placed on a trailer to improve visibility backing up.

Trailer towing customers benefit from a segment-first in-cab trailer tire pressure monitoring system, accessible from the comfort of the cab while stopped or on the highway. Blind Spot Information System with trailer tow is optimized for Super Duty to include the length of the trailer up to 33 feet long; BLIS® uses radar sensors in the taillamps to monitor areas that may not be visible to the driver.

More power than ever
The Ford-designed, Ford-engineered, Ford-built second-generation 6.7-liter Power Stroke® V8 turbo diesel that powers Super Duty now delivers a best-in-class combination of 440 horsepower and a staggering 925 lb.-ft. of torque. That power is standard for every Super Duty diesel pickup – from F-250 to F-450 – without requiring special tuning or unique hardware.