Tougher, Smarter, And Up To 350 Pounds Lighter We can't tell you anything about the horsepower, payload, or towing figures, but Ford says there will be significant improvements.

There's a new Ford F-Series Super Duty coming, and predictably it uses aluminum body panels. The switch to lightweight alloy is no surprise, following the recent conversion of the half-ton F-150. But while the smaller truck lost as much as 700 pounds according to Ford, the Super Duty is up to 350 pounds lighter. The engineers in Dearborn used up some of the potential weight savings from the body to beef up the truck where it counts. The result is what Ford calls the "toughest, smartest, most capable Super Duty ever."

Today's reveal only covers the styling, structure, and some of the features of the new truck. Actual numbers to go with that capability claim will be part of the slow trickle of information dripped out between now and the start of production in fall 2016. So we can't tell you anything about the horsepower, payload, or towing figures, but Ford says there will be significant improvements. The current F-450 claims a towing capacity 31,200 pounds, recently topped by the 2016 Ram 3500 claim of 31,210 pounds. (This is an ongoing fight between the two companies.)

What we can tell you is that the frame is now made of 95 percent high-stength steel, six times more than before. With rails 1.5 inch taller (in section view) at the narrowest point, the 2017 Super Duty's frame is 24 times stiffer. Both fifth-wheel and conventional towing hitches are weight-carrying, integrated directly into the frame. And the Super Duty has 14 percent more aluminum by weight than the F-150, due mostly to a thicker bed floor, inner panels, and D-pillars. Brian Rathsburg, Super Duty marketing manager, says this "is the most significant update since it was introduced as a nameplate 18 years ago." 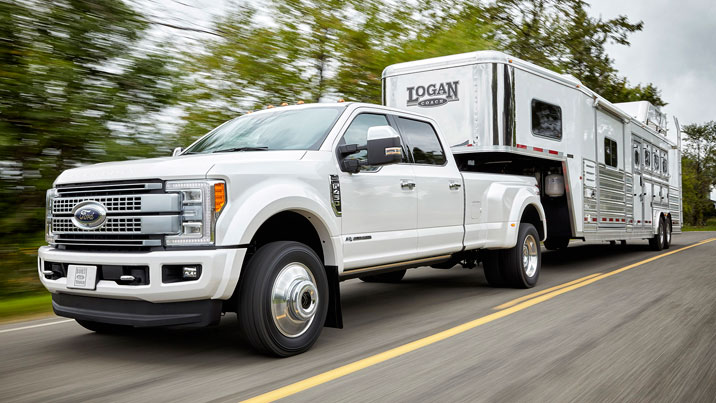 Almost every feature on the 2017 Ford Super Duty is made with towing in mind.

The updates also include a slew of electronic features, some first seen on the F-150. Others, like a remote rearview camera that mounts behind a trailer are new to the segment. It's an extensive list that includes adaptive cruise control with collision mitigation, LED bed lighting and spotlights under the side mirrors, and the latest Sync 3 infotainment system.

Almost every feature on the 2017 Ford Super Duty is made with towing in mind. Brakes and axles are larger, but in keeping with the theme, Ford won't get specific. One nifty trick is how the blind-spot information system works. It uses the cameras in the side mirrors (part of the 360-degree view system) to look back behind the truck, so that the system still functions with a trailer attached. Those two cameras are located in the base of the mirrors, so they still work with the mirrors folded. All told, there are up to seven cameras on the Super Duty, including one in the top of the windshield for lane-departure warning and automatic high beams.

You can see the resemblance to the F-150 in the Super Duty's styling, but lead designer Gordon Plato says the heavy duty version has more of a horizontal theme in contrast to the vertical lines of the half-ton. At the center of any of five different grille treatments sits a blue oval nearly 13 inches in width. The grille is flanked by headlights with optional LED running lights that, according to Plato, were inspired by C-clamps. New for 2017 is the "Super Duty" embossed in the leading edge of the hood. Exterior styling will vary slightly between trim lines which will be the same as the current lineup of XL, XLT, Lariat, King Ranch, and Platinum. As before, the cargo bed will be offered in six-foot, eight-inch and eight-foot lengths. All told there are more than 30 cab and bed combinations. 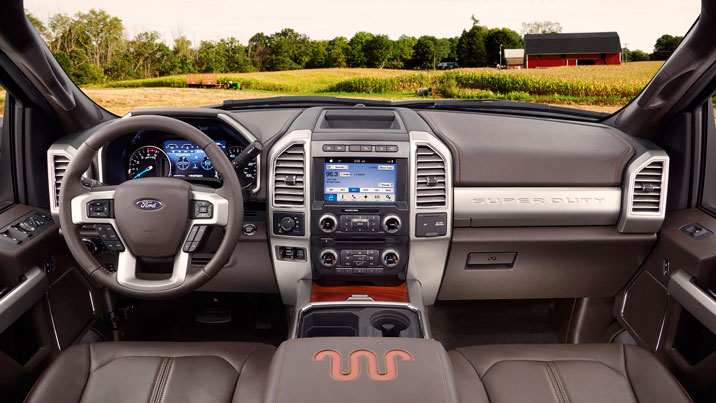 This is not only the most capable Super Duty ever, it's the most cushy, with available massaging front seats. You can get a panoramic sunroof, too. The Super Duty's interior looks familiar to anybody who knows the F-150, although the components in the Super Duty are unique, due to the larger cabin dimensions. Front row seating comes as either dual buckets or a split bench with storage inside the middle seat. Rear seats get inflatable seatbelts on the outboard positions. The flat floor under the rear seats can be converted to lockable storage with a flip-up partition – the seat bottoms form the lid.

While we don't know power and performance figures on the Super Duty, Ford says the engine lineup will remain the same, with a 6.2-liter gas V8, 6.8-liter gas V10, and 6.7-liter turbodiesel V8. All three are "improved and upgraded" according to Rathsburg, who wouldn't share further details. The 6.2-liter now comes with a heavy-duty version of Ford's six-speed Torqshift-G transmission.

The Super Duty is built at Ford's Kentucky truck plant on a single line. But Ford says construction of a new body shop made specifically for the new aluminum parts will allow for a seamless changeover. But that's a long way off. In the meantime, check out the press release below and wait for Ford to parcel out more bits of Super Duty information in the coming months.

- Most capable: Ford-engineered, Ford-built gasoline and diesel engines and transmissions power all-new Super Duty lineup that tows and hauls more than ever

"Ford Super Duty is the truck America's hardest-working men and women trust and depend on," said Joe Hinrichs, Ford president, The Americas. "We are helping these customers build a better world by delivering a new generation of pickups that set new benchmarks in capability, performance and efficiency."

The backbone is an all-new, fully boxed frame comprised of more than 95 percent high-strength steel that offers up to 24 times stiffer than the previous frame – enabling the most towing and hauling capability ever delivered by Super Duty. The new truck line features heavier-duty four-wheel-drive components, driveline, axles and towing hardware.

For the first time, the Super Duty body uses high-strength, military-grade, aluminum alloy, which is more dent- and ding-resistant than the outgoing steel body and not subject to red rust corrosion.

Together, high-strength steel and high-strength aluminum alloy help reduce weight by up to 350 pounds while Ford is reinvesting additional weight savings everywhere it counts, to give customers more towing and hauling capability than ever before.

Towing is core to the Super Duty mission. All-new advanced coaching and camera technology makes conventional and gooseneck/fifth-wheel towing easier and more efficient than ever.

As many as seven cameras help customers see more angles and monitor conditions surrounding the truck, and provide better trailering than ever before.

A center high-mounted stop lamp camera provides visibility into the cargo box, especially for easier hook-up of gooseneck/fifth-wheel trailers. A 360-degree camera system uses four digital, high-definition cameras to give the driver a bird's-eye view surrounding Super Duty. Trailer reverse guidance provides visual cues and tips to help ease backing up a trailer. A first-ever, factory-available trailer camera can be attached to a trailer to improve visibility backing up.

Customers will benefit from a segment-first, in-cab trailer tire pressure monitoring system from the comfort of the cab while stopped or on the highway.

Adaptive steering provides for increased confidence to help make towing the heaviest of loads easier and brings greater ease to navigating job sites and parking lots – with or without a trailer. The technology reduces the amount of steering input needed to change direction at low speed, while reducing sensitivity to steering input at higher speeds.

- SYNC® 3 – Ford's all-new communications and entertainment system features faster performance, conversational voice recognition and an easier-to-understand graphical interface, along with an intuitive smartphone-like 8-inch touch screen
- Blind Spot Information System with trailer tow is optimized for Super Duty to include the length of the trailer; BLIS® uses radar sensors in the taillamps to monitor areas that may not be visible to the driver
- Lane departure warning provides a warning when a driver strays from a lane through a series of steering wheel vibrations that mimic rumble strips
- Adaptive cruise control and collision warning with brake support use sensors to detect slower vehicles moving in the same direction. If another vehicle is too close, red lights flash on the windshield and a warning sound chimes. If the driver does not hit the brakes, the brake system is pre-charged to stop faster when the brake pedal is pressed

Advanced light-emitting diode technology sheds light all around the new Super Duty, including:

"The bottom line is Super Duty customers will be able to tow and haul more than ever before," said Schmatz.

Customer accessibility and ease of use extend outside the truck as well, with the cargo box offering customers these class-exclusive features:

- BoxLink™: Ford-patented combination of metal brackets and custom cleats that can be used to secure a variety of accessories in the cargo box

- Remote tailgate lock and release: Tailgate can be locked/unlocked and opened with the key fob, eliminating manual locking and increasing convenience and security. The tailgate is damped – dropping gently down, hands-free, to a flat position when opened

There are five models in the Super Duty lineup – XL, XLT, Lariat, King Ranch and Platinum.

The all-new Super Duty will be built at Kentucky Truck Plant, and goes on sale late next year.