This is what it's like to drive on drugs, safely

The sober minds at Ford turned to goggles, flashing lights, and vibrating gloves.

Alex Kierstein
The most effective way to get a sense of how bad an idea it is to drive under the influence of drugs and alcohol might be to experience it. But driving around while high as a kite is truly a bad idea. Worse than bad, actually. Seems like a paradox, so what to do? The sober minds at Ford considered the effects of marijuana, LSD, cocaine, and other drugs, and the contraption they rigged up involves ridiculous goggles, flashing lights, and vibrating gloves.

The drugged driving suit is a variation of the earlier drunk driving suit. Both attempt to capture some of the effects that alcohol and many drugs have on a driver, mainly altering perception and hampering coordination. Those goggles severely distort vision and are full of LED lights that flash in the periphery, roughly simulating the visual effects of drugs like LSD. Other drugs can cause the hands to shake, so the suit incorporates a vibrating motor stuck on a glove. The psychedelic sounds seemed intended mostly to distract, and that they did. You can see all the components in the graphic below. 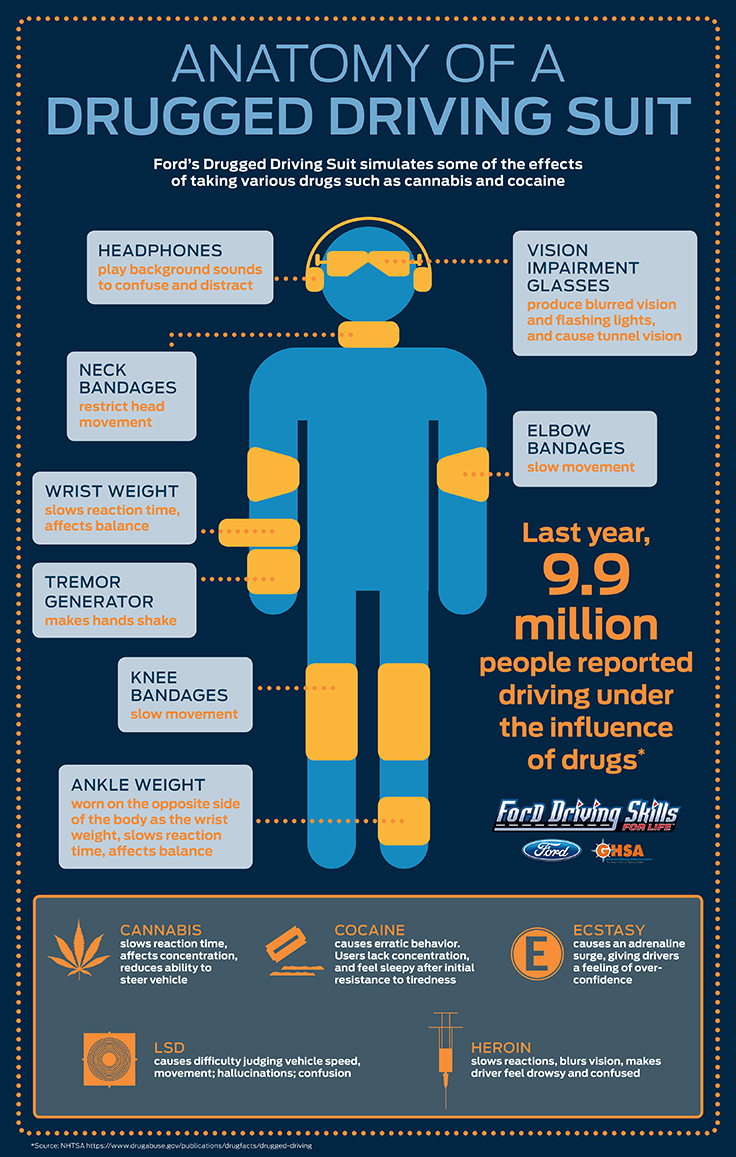 It's worth noting that the suits can't impair judgement, which is perhaps the most dangerous aspect of intoxication. Simulating even the partial effects of drugs like ecstasy and heroin on the body while driving, though, profoundly affects my ability to navigate a simple course populated only by cones. It was fun to try, and fail, to avoid running the cones over, but every time I considered if I'd be able to spot children in a crosswalk while wearing those ridiculous goggles the smile disappeared.

Ford didn't build the suit simply to confound automotive journalists; it will be incorporated into the Ford Driving Skills for Life curriculum. The global program educates new drivers on a variety of safety issues, because car accidents are the leading cause of death among American teenagers (and surely a significant concern for teens around the world). The suit was developed in partnership with German experts from the Meyer-Hentschel Institute.

I headed to Ford's World Headquarters to don the suit and hop in an Escape. The results are predictable: wearing either suit, I hit cones with a vengeance. Suit off, all the cones stayed upright. Our limited hands-on experience with both suits demonstrated that they are an effective and engaging learning tool. The suit was so distracting that it was difficult to narrate its effects while driving, so you'll just have to watch and see how profound my impairment was. Enjoy a lighthearted (and safe) exploration of a very serious issue in the video above.
X