Chris Bruce
After a long wait, the new Acura NSX is finally here, but so far the latest generation is proving polarizing among enthusiasts. Whether it's complaints about the styling, the nearly $200,000 price, or the switch to hybrid power, nearly everyone seems to have a critique about the new sports coupe. That said, nostalgia for the original NSX remains strong, and the latest MotorWeek Retro Review of the 2002 model reminds us how different the new NSX is from the original.

The 2002 model year marked the NSX's transition from pop-up headlights to fixed units, and it also features less noticeable styling tweaks along the sides and at the rear. Behind the driver, there is a 3.2-liter V6 with 290 horsepower and 224 pound-feet of torque, and it routes through a six-speed manual to get the coupe to 60 miles per hour in five seconds. There was also an available automatic gearbox with a 3.0-liter V6 that made 252 hp and 210 lb-ft.

MotorWeek's review lavishes praise on the way the NSX drives by calling it "almost unflappable" and saying "body roll was almost nonexistent." With traction control off, the coupe changes character by becoming more twitchy and requiring that drivers use a careful balance of throttle and steering. Sounds perfect.

Easily the best part of the review is when MotorWeek claims that a second-generation NSX is on the way. Over a decade later, that vehicle is finally, almost, on sale. Will it live up to the red-hot NSX standard of yore? We're about to find out. If you need any more nostalgia, the show previously remembered the '91 NSX, too. 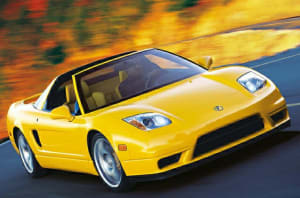