Porsche 911 R is made for the purist

This is for those who think the iconic 911 has gone soft.

Michael Taylor
Who wouldn't welcome a new version of the Porsche 911 with ultra-light weight, a GT3 RS motor, a stripper interior, and a core philosophy of driving fun over outright lap times? The iconic Porsche 911 has been getting larger and more complicated with each passing generation, and that hasn't sat well with every engineer at Porsche. So there's a ready market out there for 911 R, a limited-edition show stopper of just 911 cars, due to start production in Zuffenhausen, Germany, in May.

It's a car that combines a unique version of the six-speed manual gearbox, plenty of raw, naturally aspirated flat-six power, and all the feel of a cut-price version of the 911 GT3 RS pseudo racer. Yes, Porsche is bringing the beloved six-speed stick back to the sharp end of the 911, even though the brand's quickest cars are now dominated by the seven-speed dual-clutch transmission (and the less loved seven-speed manual).

Porsche insists that the RS is still the 911 to have if it's stopwatch-bashing you need to do. Instead, the 911 R developers focused on trying to give it the most driving purity it could cram in. The most traditional way for motorsport operations to do that has always been to rip out weight. And Porsche Motorsport didn't diverge from the plan. The 911's rear seats have been thrown out, along with a raft of other pieces Porsche Motorsport thought it could either do without completely, redesign to be lighter or stronger, or both. The pound-cutting starts at the body and bores all the way into the 911 R's chassis components, though there are some obvious nods to the marketing department that survived the dietician's axe. There is a lot of 911 GT3 in the body, with a combination of a carbon fiber (bonnet and front guards), a magnesium roof, polycarbonate front and side "glass," and aluminum everywhere else. The R cuts 110 pounds from the next-lightest 911 variant, hitting 3,020 pounds on the scales.

While the 911 R has lurid (and deletable) red or green racing stripes as standard, it's not supposed to be as wild looking as the GT3. Porsche replaced the GT3's adjustable, tall-standing rear spoiler with a more-subtle pop-up version, and the R uses a rear diffuser under the bumper to offset any loss of rear downforce.

The rear seats are gone, and the two remaining seats use carbon fiber shells upholstered in tartan cloth (another nod to early 911s). The door handles have made way for much lighter pull straps. So if the door handles were deemed too much, the radio and the air conditioner were both clearly items of excess, too. There's a one-off steering wheel, plus a host of carbon fiber trim pieces. The car's build number is even carved into an aluminum badge in the cockpit. The mechanical charge is led by the new, old gearbox, with short shift throws, direct linkages, and uniquely short gear ratios, and there's even a push-button double-declutching function for smoother shifts when the going gets tough. The naturally aspirated, 4.0-liter flat-six behind the rear axle sits on dynamic engine mounts to the hold the mid-corner weight transfer steady as the chassis engineering does its thing. The direct-injection powerplant delivers 493 horsepower at a fizzing 8,250 rpm and its motorsport origins are obvious in the 6,250-rpm peak point for its 339 pound-feet of torque. 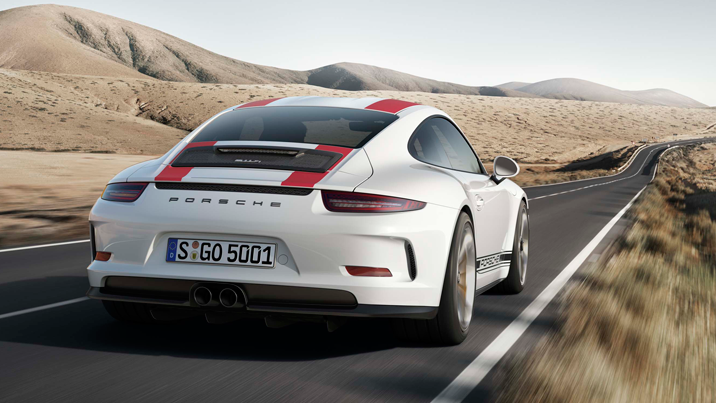 Yes, Porsche is bringing the beloved six-speed stick back to the sharp end of the 911.

The "R" denotes "Racing," and the 911 R name was taken from a limited run of homologation special versions of the 911 from 1967, to give the then-brash young brand a contender for classic European road races like the Targa Florio.

We'll have more images and details live from the R's debut at the Geneva Motor Show this week.