Brandon Turkus
Audi's new, second-generation Q7 crossover is officially one of the safest vehicles on the road, according to the Insurance Institute for Highway Safety. The non-profit has named the revamped CUV to its Top Safety Pick + list, making it the fourth Audi branded product to be so honored.

As we've said before, the TSP + rating is no laughing matter for automakers. Getting it requires not just top-of-the-line crash-test ratings, but at least an "Advanced" rating for its crash-prevention systems. Audi went a step above, though, scoring a "Superior" for its safety systems, alongside an entire array of "Good" ratings on the physical crash testing.

This is something of a unique case, though. See, IIHS doesn't typically test vehicles as large as the Q7. The only reason it did was because Audi "nominated" it and even paid for the test vehicles. The last time a "Large SUV" – which is what the Q7 is categorized as – even made a IIHS list was 2013, when General Motors Lambda-based CUVs and the Volkswagen Touareg were honored.

Of course, the reason you all probably click on these stories is to see the crashing. Check out how the Q7 fared in the small-overlap test at the top of the page – there's gratuitous slow-mo, so enjoy. 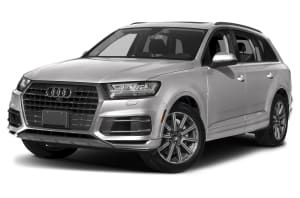