BlueTec pollution-control technology turns off at cooler temperatures, according to court filing.

Pete Bigelow
Mercedes-Benz touts its BlueTec diesel technology as a clean, green-friendly "hero" of the environment. But certain diesel-powered models from the company sold in the United States contain defeat devices that hinder effectiveness of pollution-control systems, according to a lawsuit filed Thursday.

The class-action civil lawsuit filed in the U.S. District Court of New Jersey alleges the company's nitrogen oxide reduction system turns off when ambient temperatures drop below 50 degrees Fahrenheit. As a result, affected cars pollute the environment at an average of 19 times allowable federal standards. In some cases, NOx emissions were 65 times higher than those limits.

" Mercedes labeled its BlueTec vehicles as 'earth friendly,' selling consumers the false notion that these diesel cars were less harmful to the environment, but Mercedes never divulged to consumers that BlueTec diesels pollute at illegal levels when driven at lower temperatures and that its 'champion of the environment' mantra was a sham," said Steve Berman, managing partner at Hagens Berman, the Texas-based firm which filed the lawsuit, which seeks punitive damages related to the lowered value of the vehicles.

"Mercedes never disclosed to consumers that Mercedes diesels with BlueTec engines may be 'clean' diesels when it is warm, but are 'dirty' diesels when it is not," the court filing said. "Mercedes never disclosed that, when the temperature drops below 50 degrees, it prioritizes engine power and profits over people." The lawsuit alleges plaintiffs suffered damages because of "deception," because they thought they were buying environmentally friendly cars.

Mercedes-Benz did not respond to a request for comment. A spokesperson for the Environmental Protection Agency said the agency's testing of previously certified light-duty diesel vehicles is ongoing, and that the agency does not comment on private lawsuits. 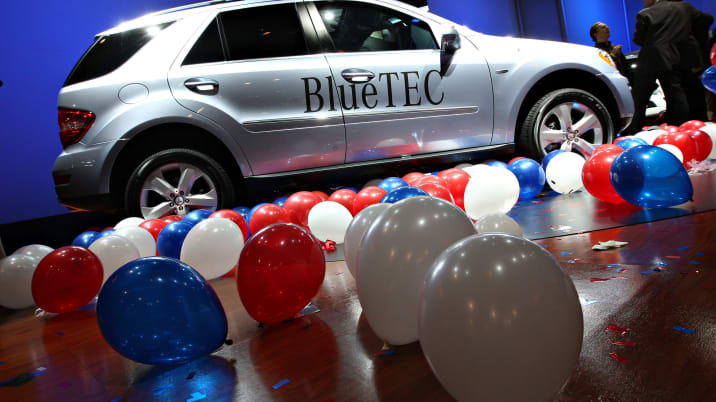 Diesel emissions have been linked to an assortment of respiratory illnesses and health problems, and the NOx emission have fallen under greater scrutiny since September, when the EPA charged Volkswagen with installing devices that circumvented emissions testing in millions of cars equipped with diesel engines.

In an advertisement on Mercedes-Benz website, the automaker says "today's BlueTEC models are simply the world's most advanced diesels, with the ultra-low emissions, high fuel economy and responsive performances that makes them not merely available in all 50 states, but desirable."

Emissions controls on the BlueTec vehicles include a diesel particulate filter and a selective catalytic reduction system, which plaintiffs say turns off below 50 degrees to help the cars maintain their high-performance driving characteristics.