Last Lamborghini Diablo of the 20th century heads to auction

Even among rare sports cars, some examples are simply more special than others because of their place in history, and for Lamborghini fans this 1999 Diablo SV might be something truly exceptional. Silverstone Auctions claims this is the final Diablo SV and arguably the last "true" Lambo before Volkswagen Group's complete takeover.

This Diablo SV left the factory on December 21, 1999, which made it the final Lamborghini of the 20th century. At that point, VW Group already had financial control over the Italian sportscar maker, but Silverstone Auctions claims the German company really asserted its power starting in 2000.

Whether you want to consider this the final "true" Lamborghini or not, it's still a fantastic looking sports car. This right-hand drive example has covered about 32,200 miles and underwent a chassis and suspension restoration in 2013. Silverstone Auctions believes this is the only Diablo to wear this three-coat Pearl Red/Orange exterior color, and the interior upholstery is a mix of black leather and Alcantara.

Silverstone Auctions will sell the Diablo at the Practical Classics Restoration and Classic Car Show in Birmingham, England, on March 6. The company expects the sportscar to sell for 150,000 to 170,000 pounds ($218,000 to $247,000 at current rates). We're curious to see if the car's place in Lamborghini history has any effect on the sale price.
Show full PR text
LAST 'TRUE' LAMBORGHINI FOR AUCTION

A special 1999 Lamborghini Diablo SV, believed to be the very last Lamborghini to leave the Sant'Agata factory before Volkswagen took full ownership, will be auctioned at Silverstone Auctions' sale at the Practical Classics Restoration and Classic Car Show.

An important piece of Lamborghini history, the car is also believed to be the last Diablo imported into the UK as well as the last Diablo SV off the production line. It is estimated at between £150,000 and £170,000 and will be offered in the sale taking place at the NEC, Birmingham on 6th March.

'V12 SVR' left the factory on the 21st of December in 1999 immediately before Lamborghini shut down for the Christmas break and their celebrations to mark the end of the Century. For the previous few months the Volkswagen Group had been in financial control of the company but the end of that year marked a turning point. From the beginning of 2000 Teutonic efficiency began to replace the magic of Italy in terms of the bloodline, style and general madness of the Italian supercars.

Speaking ahead of the sale of the car, managing director of Silverstone Auctions, Nick Whale, said: "It's a delight to be able to offer this fantastic part of Lamborghini history in the year of the 100th anniversary of the birth of the company's founder, Ferruccio Lamborghini. The Diablo is a wonderful car that truly represents everything the marque is famous for."

This right-hand drive example has covered just over 32,000 miles from new and is finished in what Silverstone Auctions believe may be a one-off colour of Pearl Red/Orange combined with a grey/black leather/alcantara interior.

This wonderful Diablo is still very much original. The original Lamborghini tool roll with its appropriate tools is present with the original tyre inflator and a very luxurious, custom-made, fleece-lined indoor car cover in red with an embroidered Lamborghini logo.

The condition of the car is amazing for the year and it drives superbly, particularly after a chassis and suspension restoration in 2013 at a cost of over £10,000. A full geometry set-up was carried out by Grimaldi Engineering in 2013 and in January 2016 the car was serviced and MoT'd.

Nick added: "Owning a Diablo SV is a dream for most people, however if purchasing one is an option for you, then the appeal of this Lamborghini 'Devil' may be too much to resist."

For more information on the car and Silverstone Auctions' sale at the Practical Classics Restoration and Classic Car Show please visit https://www.silverstoneauctions.com/1999-lamborghini-diablo-sv-6817.

Notes
Formed in 2011, Silverstone Auctions is a world-class, specialist auction house for the sale of classic cars, modern supercars, all types of competition cars, modern and historic motorcycles as well as automotive memorabilia.

The company holds the exclusive automotive auction rights for Silverstone circuit and host sales as stand-alone events as well as an integrated element of some of Europe's biggest motorsport events such as the Silverstone Classic Festival.

In addition to sales at the circuit, it also host a number of auctions each year at other major classic car events including the NEC Classic Motor Show, Race Retro and Salon Privé. 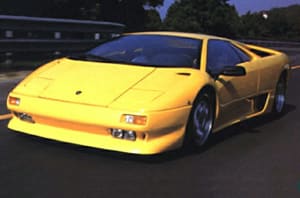