A Californian that can actually deal with cold weather.

For all intents and purposes, the Mazda MX-5 Miata is a product of California. I know it says Hiroshima on the shipping container, but the car belongs to the Golden State as it was dreamt up in Irvine and honed its driving skills on the roads near Santa Barbara. And logic would dictate the Miata would be useless in any situation other than direct sunlight.

That's what drivers from other states would think, anyway. It's the time of year when those of us from the west coast fly out to places where it's snowy and icy and everyone laughs at us because the cold and white stuff essentially shuts us down. Make fun of Californians driving in the rain or freaking out when the outside temperature dips below 55 degrees. What can we say, we're just out of our element.

Perhaps, then, it's surprising the Miata handles snow a lot better than I do. I found this out when Mazda sent me to Crested Butte, CO, for a little fun on a frozen track. Yes, there was a lot of sideways action, but it had more to do with the two California residents inside than with the car. The company really invited journalists to Colorado to get an idea of how its all-wheel-drive crossovers perform when things get snowy and icy. But the real show was watching how we navigated the autocross course they set up for the rear-drive Miatas that Mazda brought along. 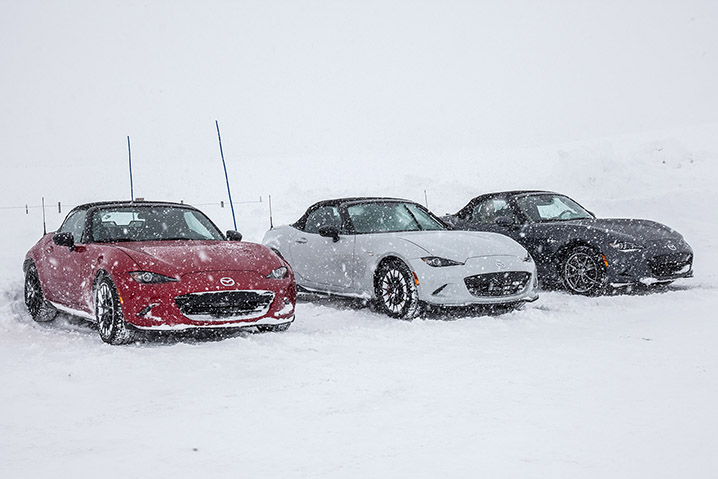 The Miata had a good heater, but it was my laughter caused by immense admiration that kept me from freezing my fingers off.

Armed with a set of Bridgestone Blizzak winter tires, the Miata performs just about how you'd expect it to – if you're light on the gas and quick with the steering and have a good amount of patience in you. It all works well if you're a pro driver, less so if you're not a frequent track visitor, regardless of the weather.

But fortunately we were using the fourth-generation Miata, which has to be the most forgiving sports car ever. On pavement, it behaves like a compact hatchback. Put it in sixth and it's relaxed and compliant, with a ride that doesn't beat you up and an engine that knows when you just want to get where you need to go. Provoke it, however, and it rewards you with predictable responses from the controls.

It does the same thing on ice, if you have a firm grasp on how a car responds to the frozen stuff. Starts are tricky, even in second gear, if you underestimate the power from the 2.0-liter four. Here's another instance where I think the Miata is best served by the 1.5-liter engine that isn't available to us, as it would probably make the rear wheels spin less easily when your right foot hits the pedal. Both my co-driver and I pushed it too far down in the first few tries and that resulted in lots of side-to-side movement, but not much in the way of moving forward.

The Miata is at home between the cones. Given traction provided by the automotive equivalent of heavy boots, the car can change direction pretty well. Even when I got too ambitious with the throttle, the spin resulted in a spectacular 360-degree view of the mountains. Convertibles in the snow really are fabulous. 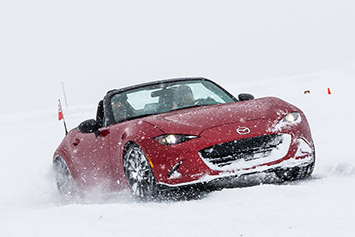 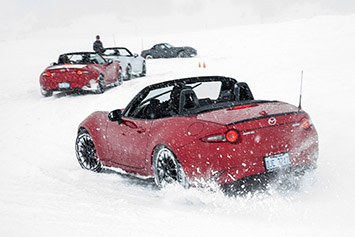 You may not realize how good a Miata is all the time until you take it in the snow.

I've already maintained the 2016 Miata is the most shockingly livable car I've driven. You look at the oddly shaped trunk like it won't fit more than a tote bag until it swallows a whole rolling suitcase. Fall into the seat and you think it'll shake your teeth out while riding over broken pavement – except that it rides almost as well as a Toyota Camry. Put the top down and the Miata puts you in an entirely different world than any other car. It's no fragile exotic, so you sense the freedom to push it around a bit. Going around the turns and furiously turning the wheel to avoid the cones makes both the car and driver so happy, both will forget the outside temperature gauge reads zero degrees. The Miata had a good heater, but it was my laughter caused by immense admiration that kept me from freezing my fingers off.

You may not realize how good a Miata is all the time until you take it in the snow. Armed with the right tires and a driver with a patience streak, the car is every bit as good as when you're on a dry road in the summer and maybe even more smile-inducing.

Or put it this way: It'll get any Californian to love the cold.

$218 - $252 Nat'l avg. savings off MSRP
See Local Pricing
I'm not in the market for a vehicle at this time. Please move this suggestion to the side for 30 days.
Huge Savings