Why a production Mazda Koeru won't be a Subaru Outback clone No automaker has had a hit quite like the Outback

Many have entered, few have won. The Subaru Outback is one of those automotive bogeys that competitors seek to imitate but never quite capture. Mazda is poised to change that, its CEO tells Automotive News, with a production version of the Koeru concept. We're torn on whether this attempt will be the one to do it, whether the proposed model is truly aimed at the Outback, or whether it's just another pale imitation destined for failure.

While the ingredients are pretty basic – wagon-like shape, extra cladding, a smidge more ground clearance than a regular car – no automaker has had a hit quite like the Outback. Reasons include packaging issues, poor brand fit, and Subaru's seemingly unstoppable momentum in building all-wheel-drive archetypes.

That hasn't stopped a bunch of companies from trying. And now for a list: Ford attempted with the Freestyle/ Taurus X; note that that model no longer exists, having been replaced de facto by the Flex and the newly crossover-ified Explorer. Audi discontinued the A4 Avant and slapped the Allroad badge and some fender flares on to capture the affluent outdoorsy crowd, initially selling well but now down 40 percent since last year. The humpback Honda (Accord) Crosstour and Toyota Venza could also be considered Outback-apers, as both short-lived models took sedan bodies and added a hatch and optional all-wheel drive. Dodge got into this space a few years back with the Journey Crossroad trim level, but fake brush guards and black wheels do not an Outback make. Volvo has perhaps come closest with the XC70, a not-quite-crossover that it nevertheless brands like its other crossovers. It helps that the Volvo die-hard and the repeat Subaru buyer aren't too different. Most of these models no longer exist, and the ones that do haven't sold as well as Subaru's Outback so far this year. Even if you're generous and add all 96,718 Journey sales (and not just those for the Crossroad, which FCA doesn't break out separately) to V70/XC70, Venza, and Crosstour, it still doesn't equal the 136,227 Outbacks Subaru pushed through November of 2015. 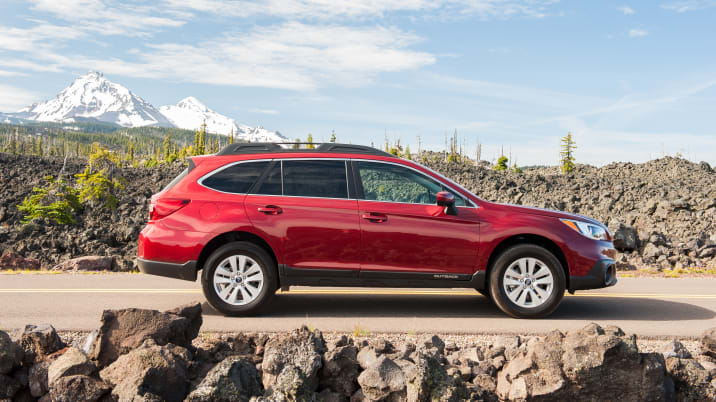 And, as Automotive News points out, Mazda hasn't sold that many crossovers so far this year (the number is 129,932 thanks to huge CX-5 numbers). So why is Mazda considering going after the hallowed Outback? First off, we're not sure that it is because there's the question of what tiny niche this vehicle would occupy. "It's a totally new car. It's a lower, sporty SUV. It's close to a wagon," Mazda CEO Masamichi Kogai told Automotive News. Does that make it a lower jacked-up wagon that looks like a crossover but has no added utility? We'd call that a wagon in a costume.


Why is Mazda considering going after the hallowed Outback? We're not sure that it is.

When the Koeru concept was unveiled in Frankfurt, the thinking was that it previewed the look of the CX-9, and nothing more. Now that the CX-9 has been revealed, the visual link is obvious, but Mazda is saying the Koeru was more than a styling exercise. Kogai says it will be lower and better to drive than the brand's other crossovers, and sized similarly to the CX-5. Think BMW X4 to the CX-5's X3.

While the rumormill has latched onto the fact that Kogai references the Outback in describing a possible production Koeru, none of this sounds like a model aimed at outdoorsy types. Yes, it checks all of the butch-wagon boxes, but it also leaves some of the cargo capability on the table in sacrifice to style. That said, Subaru itself saw success basically rebodying the Impreza wagon into the SUV-look Forester back in the late '90s. Shape sells, even if it doesn't actually improve on the underlying vehicle.

The other more likely scenario is that Mazda builds a low crossover/tall wagon that's nicer to drive than anything in its heretofore nonexistent niche or the adjacent slices of what constitute classes these days. Even if it's not beating Subaru at its own game, though, Mazda can still join the others and take a bite of that big crossover pie.