How The US Military Uses Contractors To Play The Bad Guys

This post is appearing on Autoblog Military, Autoblog's sub-site dedicated to the vehicles, aircraft and ships of the world's armed forces.

UPDATE: The USAF has at long last spoken publicly about Contract Air Services and the Air Force's emerging need to avail itself of CAS. In this video posted last week by the Nellis AFB Public Affairs team, Lt Col Michael Shepard, Deputy Commander of Nellis' Adversary Tactics Group explains why the Air Force is finally taking a hard look at CAS via a the year-long contract it awarded Draken International at the end of September.

Last March, the F-15 Eagle-equipped 65th Aggressor Squadron one of three USAF adversary units and its chief "Red Air" asset was disbanded at Nellis AFB, leaving only two aggressor squadrons – the F-16-equipped 64th and 18th Aggressor squadrons. The disestablishment of the 65th left a hole in Nellis' adversary training capabilities – one that it is trying to fill with CAS in the form of Draken International.


There are a growing number of private air forces in the US and Canada which Americans are overwhelmingly unaware of.

But there are a growing number of private air forces in the US and Canada which Americans are overwhelmingly unaware of. Composed of retired military fighter and training aircraft, operated by ex-military pilots, these company-owned fleets provide a surprising range of airborne training services to the US armed forces. Quietly, they've been a feature of American military aviation for more than three decades, increasingly integrated but still on the fringe, a contracting force not spoken of freely or often by the Department of Defense (DoD).

Business is about to pick up, however. According to the executives who lead the companies in this unique industry, the contract air services (CAS) trade is at a tipping point. "If there was ever a question about the future of the industry, it has been answered," says Jared Isaacman, CEO of the Florida-based Draken International. "It's not just a Navy thing anymore. The Air Force, the Marines, the Army – they're all going to use it and NATO allies are going to use it. We're past the question mark."

This assertion is based on snowballing economic and operational challenges facing the US military. Since the end of the Cold War, America's fleet of tactical aircraft has diminished considerably. Cutbacks hit the special adversary squadrons which once acted as "bad guy" training partners for active USAF, USN, USMC, and USA units especially hard. Most were disbanded. 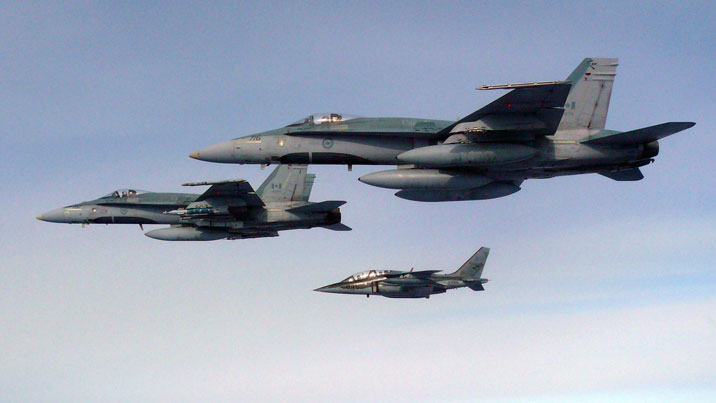 Meanwhile, the conflicts in Iraq and Afghanistan took a heavy toll on the smaller regular fleet, piling up flight hours on aging airplanes. Replacement or upgrade of these aircraft is sorely needed but the nation's increasingly tight defense budget is insufficient to allow equitable recapitalization. Add in the bill for the costly F-35 Joint Strike Fighter and you have a rapidly forming perfect storm.

Slowly, private contractors have stepped in to augment aviation training the armed forces now struggle to deliver. CAS providers offer an alternative by cost-effectively filling gaps. The roles/missions they undertake can be broken into three broad categories: threat simulation, research and development support, and aerial refueling.

Adversary support or "Red Air" is the most complex/dynamic contract air service, typically involving contractor aircraft flying as part of a "bad-guy" red force, opposing a "good-guy" blue force. Blue Air forces can include the full range of tactical and support aircraft employed by US military. Red Air forces are increasingly supplemented by CAS providers who fly alongside the remaining active-duty and Reserve "aggressor" squadrons.

Newport News, Virginia-based ATAC USA has been America's most active CAS provider, working on succession of contracts with the USN for over a decade. The company's fleet of 25 aircraft including Mach 2-capable IAI Kfir F-21s (an ex-Israeli fighter first fielded in the 1970s) and subsonic Mk.58 Hawker Hunters (a British fighter-bomber first fielded in the 1950s) is deployed at a number of Naval Air Stations across the continental US, Hawaii, and Japan, and in Germany supporting US Air Forces Europe. 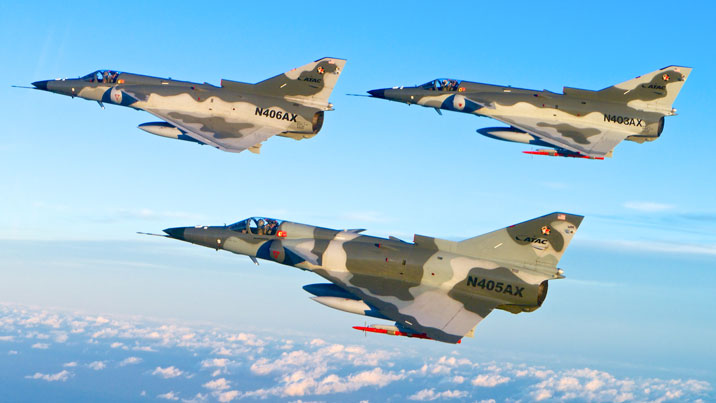 The Kfirs carry electronic gear to jam signals and present an unfamiliar picture to the sensors and pilots of Navy F/A-18 Hornets/Super Hornets, E-2C/D Hawkeyes and EA-18G Growlers. Entering training ranges at speed as part of the Red Air force they aim to confuse Blue Air forces, complicating their mission by adding to the "fog of war."

"Our Navy contracts have gone up year over year," says ATAC USA CEO Jeff Parker. "We're now flying almost 5,000 hours per year around the world. We've flown well over 40,000 hours in support of DoD for 18 years. The Navy has figured out how to perfectly integrate our assets with theirs."

The Navy has been the most eager user of CAS but with training shortfalls looming the USAF, long reluctant to embrace the industry, is coming around. At the end of September, Draken International was awarded an Air Force contract to provide adversary support at Nellis AFB, Nevada. The announcement marked a milestone for the industry and a further acknowledgment of its relevance. 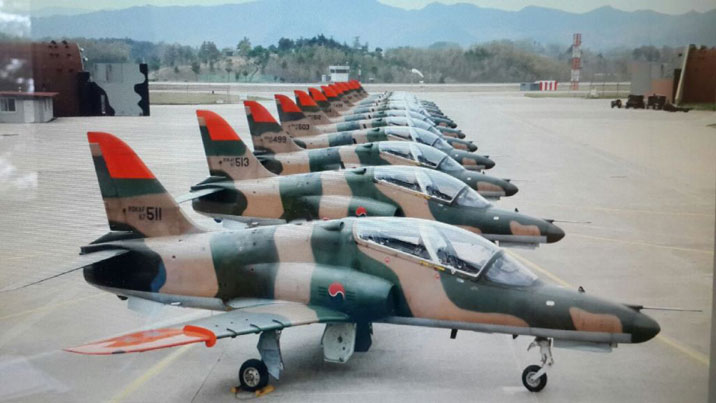 "We are excited to begin delivering a professional, safe, and highly capable aggressor service to the United States Air Force."

The USAF contract award followed the August deployment of six of the firm's A-4K Skyhawks equipped with F-16A-equivalent avionics to support the Joint Strike Fighter (F-35) Operational Test Team at Edwards AFB, California. So equipped, the third-generation Skyhawks effectively simulate fourth-generation fighters for what the company's CEO claims is a fraction of the cost.

"We are excited to begin delivering a professional, safe, and highly capable aggressor service to the United States Air Force. Personally, I am really looking forward to integrating with and complementing the USAF Nellis-based aggressors. They have served this essential mission for a long time and are some of the finest in the world," said Col. Terry "Stretch" Scott, a recently retired USAF F-22 Pilot and Nellis Detachment Commander for Draken International.

Draken is a relative newcomer to CAS but like ATAC USA deploys aircraft flown by experienced ex-military pilots to military airfields in the US and Europe. Its billionaire CEO Jared Isaacman (founder of payments processing firm, Harbortouch) is building the largest fleet of privately owned tactical aircraft in the world with nearly 70 jets including 11 Skyhawks, 21 nearly-new Aero Vodochody L-159Es (Advanced Light Combat Aircraft built for the Czech Republic in 2003) with similarly advanced avionics, nine Aermacchi-MB-339CBs (an Italian training/light attack jet) and 27 MiG-21s.

Isaacman contends that Draken's radar-equipped L-159s and A-4Ks are game-changers for the industry, representing more than just the "metal in the sky" the firm's competitors offer. "We have tactical airplanes that can be AMRAAM (air-to-air missile) aware, potentially react to those type of missile shots and fire similar caliber missiles, then document the training on video with HUD debriefing and radar tapes. The military is looking at us and saying 'you're telling me you're kind of like an F-16 but it doesn't cost what an F-16 costs? That's great.'" 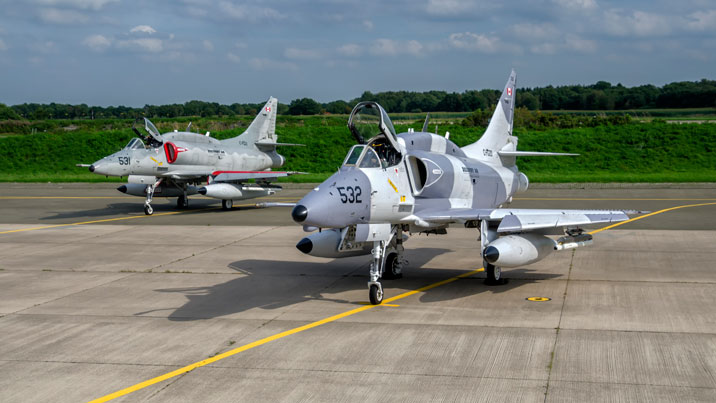 ATAC USA and other competitors respond that true fourth-generation tactical aircraft are better suited to high-end training, including requirements that will evolve as the fifth-generation F-35 becomes operational. Parker says ATAC is ready to acquire aircraft tailored to the services' needs once they are identified.

Not all airborne training requires fourth- or fifth-generation performance, however. Joint Terminal Attack Controller (JTAC) training, which prepares soldiers to direct air strikes and other offensive air operations from a forward position on the ground, is a significant business for CAS providers. But reductions in America's tactical aircraft fleet meant fewer frontline craft could be spared for this essential training.

Illinois-based Air USA has been a leader in the provision of aircraft and pilots for JTAC training to the Marine Corps and the USAF Special Operations Command since 2010. Initially, the company supported training with German-made Dassault Breguet Dornier Alpha Jets (light attack) then transitioned to the British-built BAE T59 Hawk (advanced jet trainer). 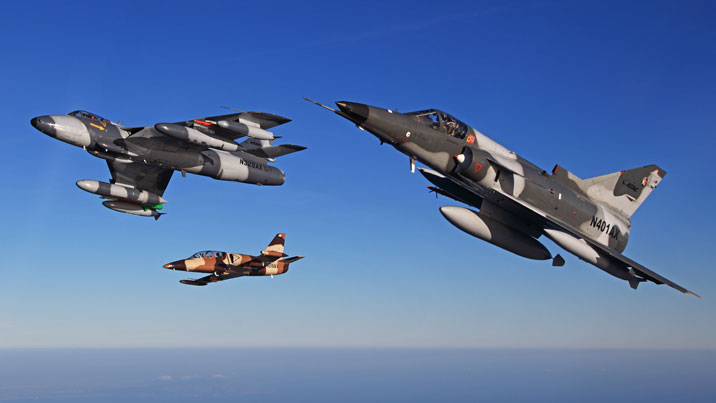 "Our close air support work for the Air Force is probably the most sophisticated thing any contractor does."

"Our close air support work for the Air Force is probably the most sophisticated thing any contractor does," Air USA Operations Director Ben Brezlin explains. "We're flying on NVGs (night vision goggles) with our own bombs. That's a lot for a civilian company to do."

Air USA plans to continue providing CAS but is in a state of limbo with the USN/USMC after the loss of one of its Hawks last March in a landing accident at Marine Corps Air Station Yuma, AZ. In the interim, Draken International has taken over the USMC JTAC training contract. Air USA plans to bid on upcoming USAF and USMC contracts.

The firm is not the only company to have suffered accidents while performing CAS. ATAC USA and Patriot Technologies Group (now out of the CAS business) have also lost aircraft and pilots. Brezlin stresses that the loss of the company's Hawk is the only accident Air USA has suffered and adds that CAS providers face the same reality the military has traditionally confronted. The more hours they fly, the greater the odds of accidents.

Virginia-based Omega Air Refueling Services has a CAS contract with the USN and USMC, employing their three aerial tankers – two Boeing KC-707s and one KDC-10 – for air to air refueling duties including the first-ever aerial refueling of an unmanned aircraft (the X-47B) last spring. Though Omega's tankers don't fly on training ranges they do incur risk. In 2011, an Omega KC-707 was lost when it crashed on takeoff at Naval Base Ventura County. 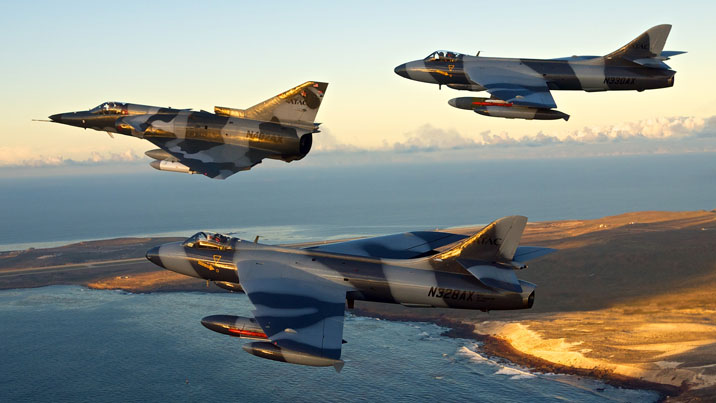 "I see growth beyond our current contracts with the Navy. I see growth with the USAF and growing opportunities around the world."

Overall, CAS providers have a fairly good safety record. But Draken International and other players in the industry including Canada-based Discovery Air Defense Services (which executes CAS with the Canadian armed forces) and Las Vegas-based Blue Air Training will encounter greater hazards as they take on further contracts.

Perhaps that reality, along with the lack of a uniform standard for CAS certification across DoD and the US military's reticence to admit that it's between a rock and a hard place when it comes to meeting airborne training requirements, is why the two primary users of CAS are reluctant to speak about it publicly.

Despite repeated requests, no individual from either the USAF's Air Combat Command (ACC) or the USN's Naval Air Systems Command would go on record with comments concerning the future of CAS with their respective service.

"I see the industry growth that we forecast a long time ago finally coming to fruition," says ATAC's Jeff Parker. "I see growth beyond our current contracts with the Navy. I see growth with the USAF and growing opportunities around the world. It's been a long time coming but fiscal constraints are such that it's inevitable. If it's not, the outcome will be decreased readiness."