Mobility Soars, But What Are The Long-Term Effects?

Pete Bigelow
Prepare to share the highways with an ever-growing number of new road users.

A range of Americans both young and old who previously didn't have access to transportation will soon capitalize on ride-sharing services and mobility options, according to a new report from consulting firm KPMG. Their arrival could have a tremendous impact on infrastructure, traffic, and energy needs.

Senior citizens and millennials will lead the influx. Many seniors are no longer capable of safe driving, and millennials' high debt loads can prevent them from owning cars. The groups "share one interest," says the report, released during the Los Angeles Auto Show. "They already like mobility-on-demand services. We think their like is going to turn into love."

What happens when they're smitten? Over the next 30 years, the number of personal miles traveled by Americans will jump 500 billion per year, KPMG projects. Rising overall population numbers will contribute an additional 500 billion miles to the increase, and together, the new 1 trillion miles of personal miles traveled will change the way roads are used.


"The opportunities for these mission-specific vehicles are enormous and untapped." - Gary Silberg

Though many have assumed that increase means a surge in traffic congestion, Gary Silberg, national automotive industry leader for KPMG, says it's too early to reach that conclusion. "That's a complex question, as you can imagine," he tells Autoblog. "We're not sure yet. And when you're making those projections, you have to be humble and cautious."

There's some nuance in those numbers. An increase in personal miles traveled (PMT) don't necessarily correlate with an increase in vehicle miles traveled (VMT). If three occupants shared a ride to an airport, for example, their PMT would be triple that of VMT. So how users share those services will go a long way in determining whether the increase in personal miles projected actually results in further congestion. Advents in technology and policy will also play a role: Vehicle-to-vehicle communications may allow for more seamless interactions between cars. Cities that ban most vehicle traffic or only permit ride-sharing operations on their streets could see dramatic declines in traffic congestion while others get more congested. 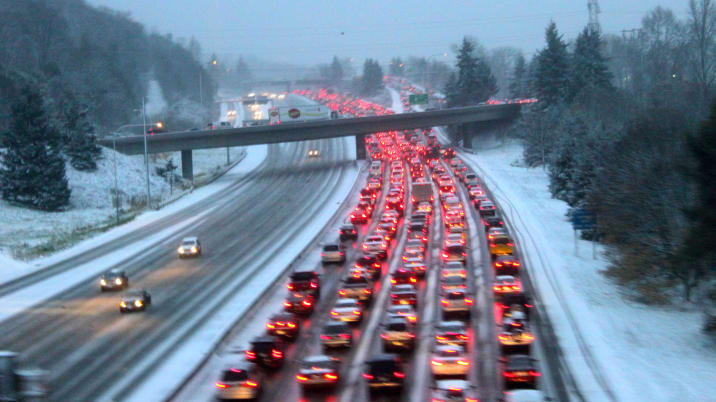 Curiously, the KPMG report says the addition of 1 trillion miles traveled and the ensuing upheaval represents a "golden opportunity" for the auto industry. But the company doesn't think traditional automakers will take advantage. On the contrary, the report projects their demise within the next decade, and illustrates that point with a picture of an imploding building. Silberg says it's difficult for big companies to keep up with the frantic pace of innovation in the industry. Survival will not only be about keeping pace, but for car companies, it will be about investing in core competencies and partnering for the rest.

"The opportunity is really big, so I'm actually optimistic," he said. "But there are a lot that won't keep pace. You can pick your own. The smartest way forward will be taking advantage of opportunities to partner and have alliances. We coin the expression 'find these partners and dance.' You can't do everything internally. No company has the cash to invest in everything. So we think it's important to choose wisely."

Capitalizing on the trend might not mean selling cars en masse, but tailoring mobility toward niche markets. The paper mentions senior citizens and millennials, but disabled Americans are another group eagerly adopting ride-sharing services. In an autonomous future, improved mobility for the disabled will only grow. Earlier this month, the National Council on Disability, an independent federal agency, issued a report that examines the promise of autonomous solutions for mobility and the roadblocks currently in the way.

Do parents want an Uber for kids?

That's one example of how serving a particular niche translates into a promising business model. Another? A fledgling company called HopSkipDrive offers Uber-like ride-sharing services to kids. Drivers are childcare professionals whose driving and criminal backgrounds are vetted and they help busy working parents deliver kids to piano lessons, soccer practice, etc. In a sense, HopSkipDrive CEO Joanna McFarland says, it portends the death of the family minivan.

"A minivan doesn't help you be in two places at once," she said earlier this week at the Connected Car Expo in Los Angeles. "As the picture of American families changes, so too will the American family car."

Silberg offers another twist beyond sharing – speed. If the autonomous future allows for much higher average speeds, the impact on traffic and businesses will be profound. If an autonomous car can travel between San Francisco and Los Angeles at 120 miles per hour, how will it affect the aviation industry? Will you need roadside hotels? Can someone build an autonomous car specifically for overnight trips? "The opportunities for these mission-specific vehicles are enormous and untapped," he said. "So we're very optimistic. It's a fantastic time to be in the industry."