The difference between a sports car and a supercar is lost on the Portuguese gentleman standing on the roadside. I've stopped in my attempts to flood the country air with V8 ruckus for the moment, and am parked on the shoulder, taking a breather when he approaches. My Portuguese is limited to bom dia and obrigado, and he's not saying anything in English, but his wide smile, rotating pointer finger, and ready iPhone are symbols that transcend language: "Please gun it."

Fresh off some 75 miles of strappy pavement between hot laps at the Portimão circuit and my hotel, behind the wheel of McLaren's bouncing new baby, the 570S Coupe, I'm more than happy to oblige. The British company has hammered home that the 570S, the first of its Sports Series cars and the most accessible driving tool in its new range, is a sports car. That is; not a member of the unearthly Ultimate Series á la the P1, or a meat-and-potatoes supercar like the 650S from the Super Series.

The guy with the phone held aloft couldn't care less about those delineations. I pull out into the street, offer my friend a few red-blooded throttle blips, and then give the cobblestones a footful of hell. The 3.8-liter twin-turbo V8 makes a symphony's worth of sucking, blowing, whistling, and exploding noises behind my head, and the world again makes a blurry kind of sense. 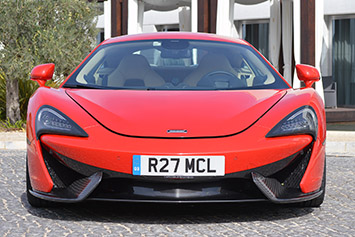 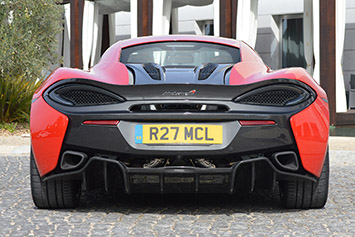 It's a stunner, even before the trick dihedral doors float up and drive the crowd wild.

If you're McLaren, whose best-known current model may be the $1-million-plus, 900-plus-horsepower P1 everythingcar, it makes sense that you might want to sandbag a bit when it comes to your entry-level model. But for all that it may compete with the almost-commonplace Porsche 911 Turbo S and the Audi R8 – in terms of performance and price – the 570S reads as "supercar" to most of the world. Even stripped of the McLaren Orange or Mantis Green the brand's vehicles are so often photographed in, my Vermillion Red test car looks like the proverbial million bucks. The elliptical roofline, wheels at extreme corners, and short sloping front end telegraphs the mid-engine orientation. And anyone that's halfway familiar with the brand won't miss the signature-shape of the headlamps, and charismatic vent work on the sides of the body. It's a stunner, even before the trick dihedral doors float up and drive the crowd wild.

Inside things are equally well conceived, and still subtler. I've gravitated to the leather-lined trim, a more genteel rendering of the McLaren design theme. Napa hides reside where carbon fiber might otherwise go, and power-adjustable seats gently hold my shoulders and backside where hard-as-hell sports seats would typically grapple me. The company has hopes that the 570S is accessible enough to drive on the regular, and not just for track days or full-tilt canyoneering. This plush cabin fitment speaks to that goal. 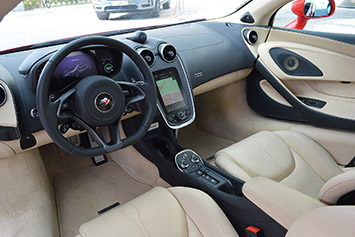 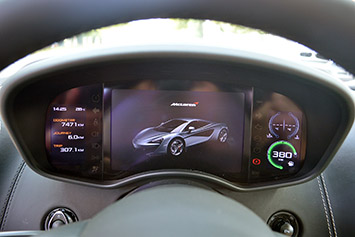 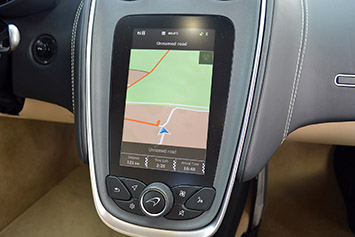 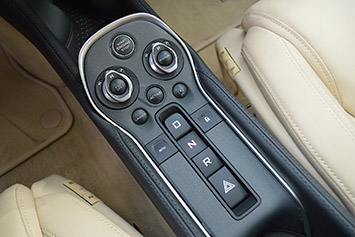 Forward visibility is tremendous, with that low, sculpted nose dropping away and wheel arches just marking out the front rubber

But it's not just wider seats and silky touch points that make the 570S less intimidating than its stablemates. The car's carbon fiber tub has been modified with sizable cutouts at the sills, allowing a lot more space to easily step in and out of the car. I'm six-foot, five-inches, so I still have to scrape a bit to make it under the door and behind the wheel, but once there I've got headroom, legroom, and elbowroom to spare. Forward visibility is tremendous, with that low, sculpted nose dropping away and wheel arches just marking out the front rubber. Placing the 570 exactly where I want it, on road and track, is a simple affair thanks to the amazing field of view. The rear view is less excellent, but mid-engined exotics shouldn't be entirely painless, daily driveable or no.

I don't have much urge to look backwards when driving, anyway. McLaren's hyper-responsive 3.8-liter V8 beastie lives back there, sure, but the sound from it fills a 360-degree bubble around me wherever I go. The company claims to have learned many lessons from the time of the MP4-12C to now, including how to make its twin-turbo engine sounds like something compelling. The drab oration of that first car is long gone, banished in favor of a higher pitched, louder exhaust note that sounds strident from inside the car, and downright evil from out. 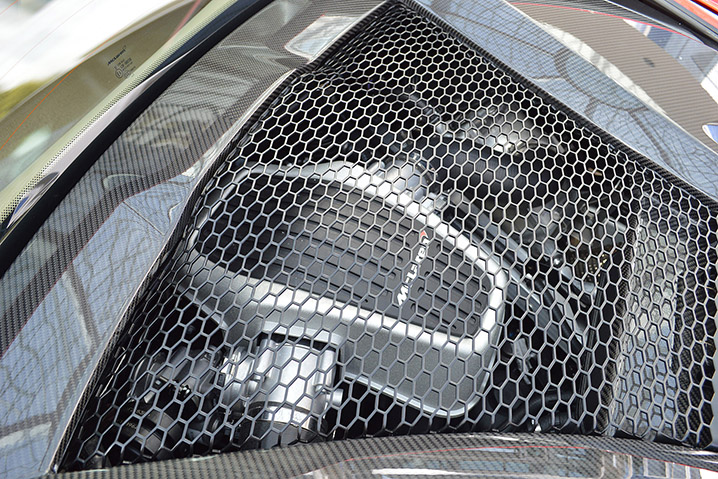 The time it takes for the V8 to spool is short, but purposeful. I mat the throttle from a standstill and only one or two of my anxious heartbeats die before the tach sees 3,000 rpm, and the first rip of power engulfs the rear wheels. Keep on it and you'll feel another surge around 6,000 rpm, at which point you'd better be on a straight road, ready to shift up, smiling and/or screaming, and paid up on your life insurance. It's fast, folks. Chest crushing in a way that makes me disbelieve the 3.1-second 0-60 time. On the bucolic roads I might as well be driving a jet boat to compared to the local transportation, blithely moving around Volkswagen Polos and smoking motorbikes with pace and confidence.

The snicker-snack seven-speed dual-clutch transmission is perfect for McLaren's turbo power unit, too. The coupe feels like nothing short of a dedicated racing machine as I change up and down, especially in Sport mode where shifts crack off with audible authority. The trans is great on the racetrack, but works just as well on the street, showing its flexibility as well as forcefulness.

I've never driven Portimão before this, which I regret after my first recon lap. The track is wild: a towering front-back straight drops off a bumpy hill into a super-fast and pucker-worthy Turn 1. There seem to be more blind than sighted turns. Hairy hills dot the landscape. It's perfect. 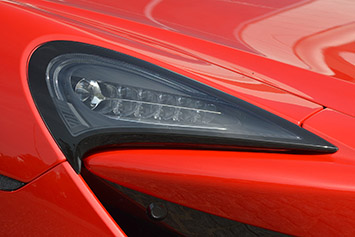 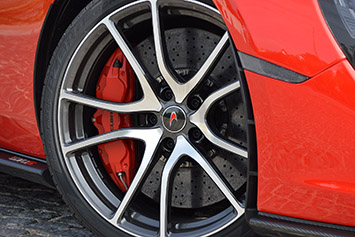 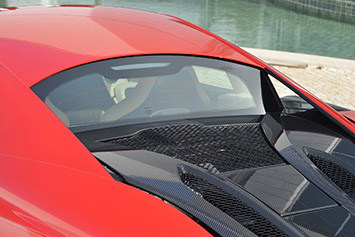 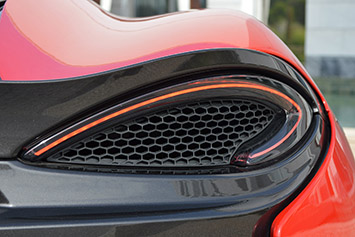 The 570S is lively and massively fast around the circuit, even in my inexperienced and sweating hands.

And the 570S is lively and massively fast around the circuit, even in my inexperienced and sweating hands. With slightly narrower PZero runner compared with the 650, the lightweight coupe still has plenty of raw grip, but the adhesion isn't overpowering. The tail wiggles when I combine too much power with too much lock, though the forgiving machine is so balanced that correcting those little messes isn't a problem. In fact, it's kind of a blast. More to the point, there's such a high level of information about the front tires coming through the steering wheel, and about the rear tires through, well, my rear, that I always feel connected to the drive. Even as my lap time dwindles, on a few corners the combination of steering feel, chassis response, and that potent engine come together; the result is a lithe sports car doing exactly what I ask it to, good or bad.

Oh, and the brakes are good, thank god. I discover that the first time I come into that dipping back straight a bit too fast. There's great pedal feel, with just a bit of softness giving way to firm, poised stopping power from the big carbon-ceramic discs. Just the thing for hauling me down from well over 150 mph, just in time to set up for the next corner. 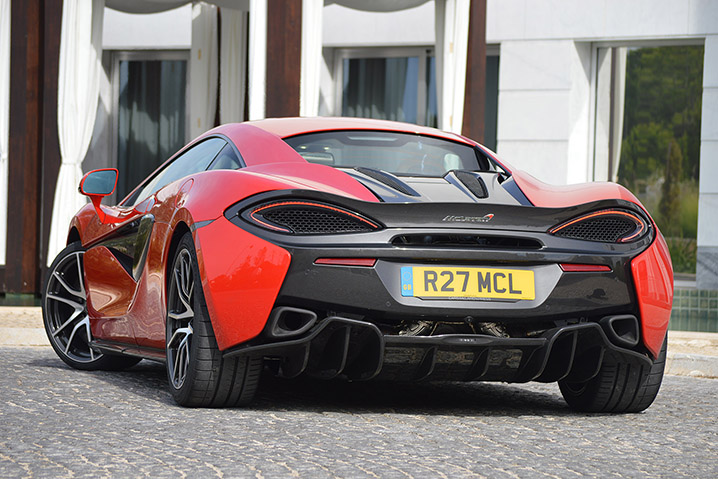 Eventually the company hopes that the 570S will account for 2,500 of a projected total yearly volume of 4,000.

Truthfully though, I enjoy driving this Mac on the road even more than over Portimão's daunting surface. For a serious looking machine, the 570S comes off as downright playful on switchbacks and narrow lanes. I can change up styles from hard-charging to laid back at a whim, never feeling an overly brittle ride or too-caffeinated a response to inputs. In fact, ride quality feels rather plush – a good thing for the intended buyer, especially as it's in this kind of nine-to-five driving that the Porsche 911 really excels.

McLaren reps seem pretty confident that they'll be able to sell this lovely new sports car to its current owner base. Not as a replacement for a 12C or a 650S, but an addition to the garage. Eventually the company hopes that the 570S will account for 2,500 of a projected total yearly volume of 4,000, however, so there will have to be a few conquests in the mix. Starting at a Porsche 911 Turbo S-baiting $187,000, but moving near the Lamborghini Huracán and Ferrari 488 territory at the top end, the baby Mac will have a chance to turn heads from all kinds of affiliations, I'd say. Especially with the easy-to-live-with character so finely honed, and the easy-to-drive-wickedly so readily accessible.

Watching one of a string of local characters line up photographs of the red McLaren, I'm not convinced, company parlance to the contrary, that "sports car" does this vehicle justice. Magical to drive, evocative to look at, and enveloping to listen to – call it whatever you like. Just please call me up when its my turn to take it out again.