An Easy Way In To The Go-Fast Lifestyle Every year, thousands of people buy two-door coupes that bear the badges of BMW M, Mercedes-AMG, Audi RS, and Cadillac V. These cars are powerful, fast, agile, and - if you believe the marketing - are made to kick ass on the track.

But, and this is just my theory, only about 0.2 percent of these owners actually drive their cars the way the companies intended. Most buyers, I think, want the image put forth by an M4 or C63 AMG more than any dynamic abilities. These people just want to give the impression that they're out tearing up the local road course, and a $70,000 sports coupe and a pair of Pilotis are just the ticket. Which is not to say they don't use the performance of these cars, just not the full track-day capabilities. If this describes you, I recommend checking out the new Lexus RC F.

This coupe is powered by a 5.0-liter V8, complete with 467 horsepower and 389 pound-feet of torque. These figures, while impressive in a vacuum, are troubling when viewed alongside the competition. The Mercedes-AMG C63 tops 500 in horsepower and torque in S guise, while the six-pot Cadillac ATS-V is nearly equal on power but offers almost 60 more pound-feet of torque. And while the BMW M4 cedes more than 40 horsepower to the Lexus, the RC F doesn't feel as potent from the driver's seat. 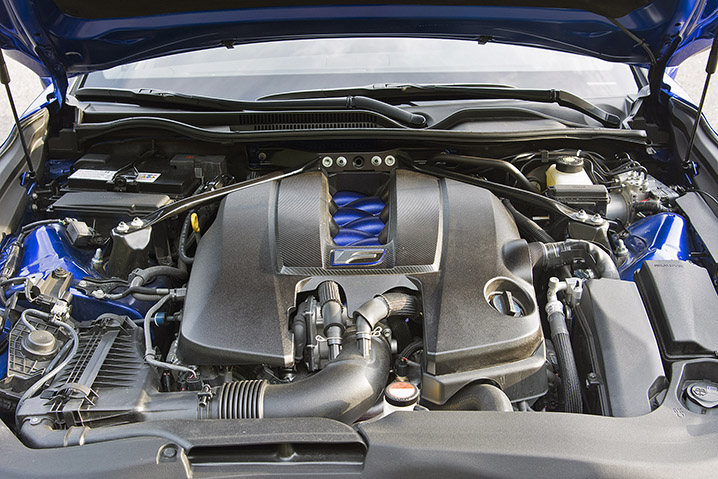 The RC F doesn't even feel as potent as less-powerful competition.

This numerical deficit translates to the stopwatch, where the RC F lags behind the force-induced competition. The C63 and ATS-V both hit 60 in 3.9 seconds, while the BMW takes 4.1 seconds (these are all manufacturer estimates, by the way). The RC F needs 4.4 seconds to hit 60 miles per hour. The only vehicle in this segment that's slower is the Audi RS 5, and that's been on sale longer than all its current competitors combined. And the Audi's charms (oh, that glorious engine note) help you overlook its lack of pace.

The RC F doesn't have the aging Audi's charisma, making its lack of both perceived and actual pace more glaring. I'm placing blame on this car's overbearing induction sound. It was a neat trick on the original IS F – this car's predecessor – but over the years it's just become kind of played out. At the least the noise is real, piped into the cabin via a resonator, but it sounds too artificial. And the point at which it kicks in is entirely predictable. Neither of these traits contribute to an involving driving experience. 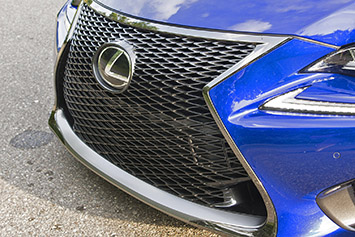 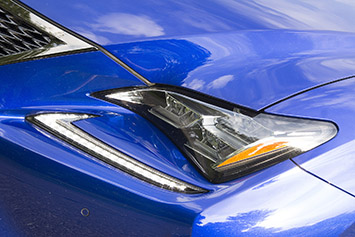 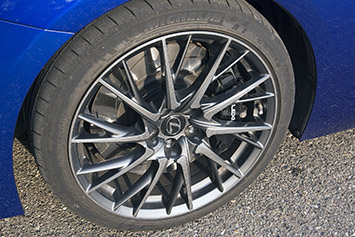 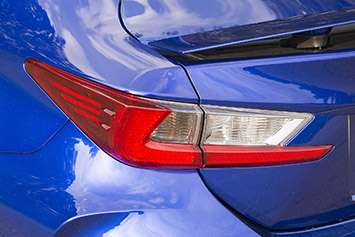 The reworked eight-speed automatic transmission is a huge improvement over the old one.

Complaints about power and sound aside, the RC F fixes one of its forebearer's biggest faults. The reworked eight-speed automatic transmission is a huge improvement over the old one. That old gearbox was so monumentally dimwitted and slow that it ruined what was an otherwise entertaining sports sedan. While the RC F uses the same Aisin-built Toyota AA80E gearbox as before, it now responds quickly and competently to inputs from the wheel-mounted paddles. When left in full auto, though, the 8-speed still resists downshifting. This gearbox isn't as fast or as smart as ZF's eight-speed unit either which is sharper in both automatic and manual modes, especially on downshifts.

"You have to try so hard to get it to do anything," one editor noted during Autoblog's time with the RC F. And they're right. The RC F is aloof, its limits so high that it takes an unreasonable effort to elicit an entertaining reaction during street driving. Compared to the hyperactive and hysterical IS F, Lexus swings too far towards emotionless with the RC F's character. There's feedback through the chassis, but you never get any sense of drama or fun when pushing hard. 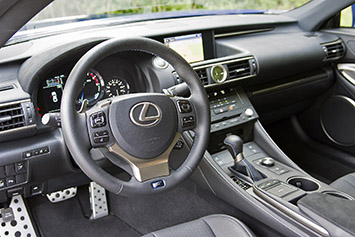 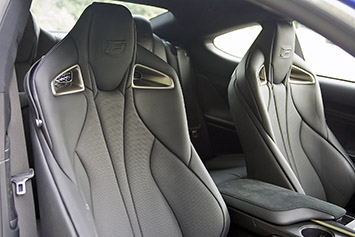 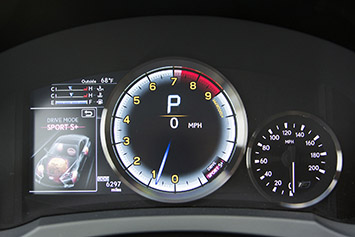 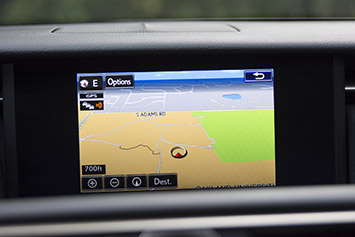 Taken as a whole, the RC F's purposeful, cockpit-like interior is actually kind of fun.

Don't get us wrong, there's plenty to appreciate about the RC F, like a ride from the double-wishbone front suspension and multi-link rear that's more comfortable than the more sporting competition. The RC F is great on the long haul – I did 200 miles of non-stop highway driving without complaint – and only really shows its bad manners when presented with a properly big pothole (as most cars do).

The RC F's interior is more of a mixed bag. Yes, the sculpted leather seats are some of the most cosseting I've ever experienced. It's like being bear-hugged by a tannery. But the tightness of those thrones shouldn't be reflected elsewhere in the cabin. The BMW M4 gives you an extra 4.6 inches of shoulder room and two more inches of headroom. Even the cramped ATS-V Coupe, which is basically tied in terms of max headroom, bests the Lexus on shoulder space.

While I'm no fan of this tiny interior, I'll admit there's a certain appeal to the overall layout. The high transmission tunnel bisects the cabin, while the driver sits behind a small, flat-bottom, thick-rimmed steering wheel. The aggressive rake of the windshield limits forward visibility, while lateral sightlines are also compromised. I'd normally complain about such shortcomings, but taken as a whole, the RC F's purposeful, cockpit-like feel is fun. 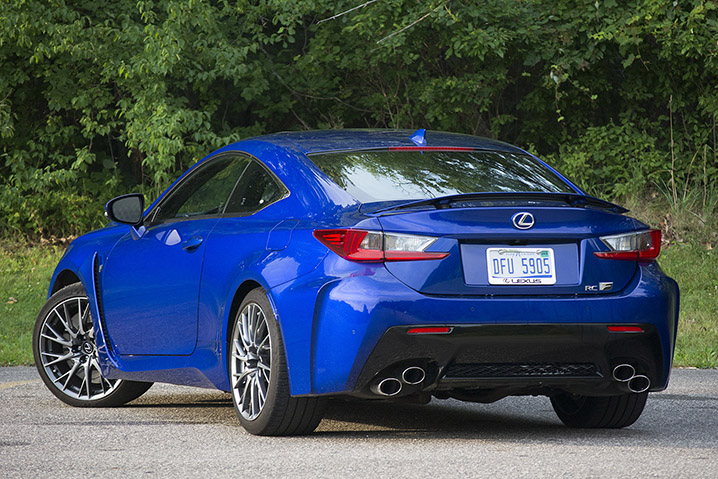 The Lexus RC F isn't the dynamic equal of its competitors.

The RC F starts at $63,325, which is pricey if you compare it solely on dynamic feel to the competition, which can be had for a similar price. The Lexus is a value next to the BMW M4, which can't be had for less $66,395, but then there's that Cadillac ATS-V Coupe, which rings up at $63,660. Our tester added on multiple high-priced options, including the $4,400 Premium Pack (heated/vented seats, carbon-fiber interior trim, blind-spot monitoring, LED headlights, park assist, and auto-dimming mirrors). $1,500 was also spent on those handsome 20-spoke, 19-inch wheels, while $595 was set aside for the eye-catching Ultrasonic Blue Mica paint. Adding navigation and a (rather hollow sounding) 17-speaker Mark Levinson surround stereo kicked the price up $2,840, while the aftermarket-feeling sunroof was an $1,100 option. All told, this RC F cost $73,760, a figure that does undercut equally optioned versions of the M4 and ATS-V Coupe by at least a couple thousand dollars.

The Lexus RC F isn't the dynamic equal of its competitors. Instead, it delivers a good blend of everyday livability, and it does so for a more reasonable price. While it isn't likely to appeal to people buying cars for track days, it's a good deal for folks who just want to look the part.