Living Life Large: Driving $2 million worth of cars in one week

Notes From A Week's Worth Of Car Testing In California

Steven J. Ewing
Monterey Car Week has quickly become one of my favorite events of the year. There's something for everyone – classic car shows, modern concepts and new vehicle debuts, auctions, racing, and so much more. From a media perspective, there's also a chance to drive a ton of cars. Many automakers bring their latest wares out to Monterey for us to test during our limited free time, and it's a great opportunity to experience fantastic metal against a gorgeous backdrop.

That's exactly what I did this year. Instead of flying into Monterey and being driven around, my journey started in Los Angeles and ended in Napa, and I managed to get behind the wheel of some $2 million worth of new cars. Some were old favorites, and many were new experiences. But looking back, this was one of the best weeks of driving I've had in years.

Rather than try to come up with some common arc to tie these cars together, here are my notes on all the cars I tested in California earlier this month, presented in the order in which they were driven. 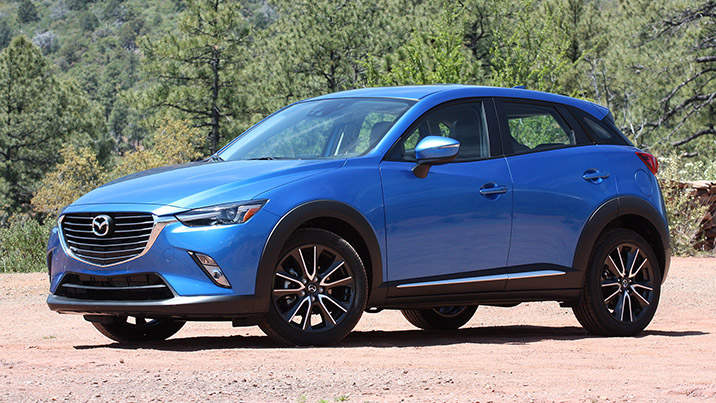 The CX-3 pictured here isn't the exact one I drove in California, but it's close. The only difference was color – my delivered-to-LAX tester wore Mazda's awesome new Ceramic hue (pictured below on the MX-5 Miata). I used the CX-3 to slum through crummy Los Angeles traffic for two hours on the way out to Santa Barbara, with a quick stop at In-N-Out Burger on the way for good measure. 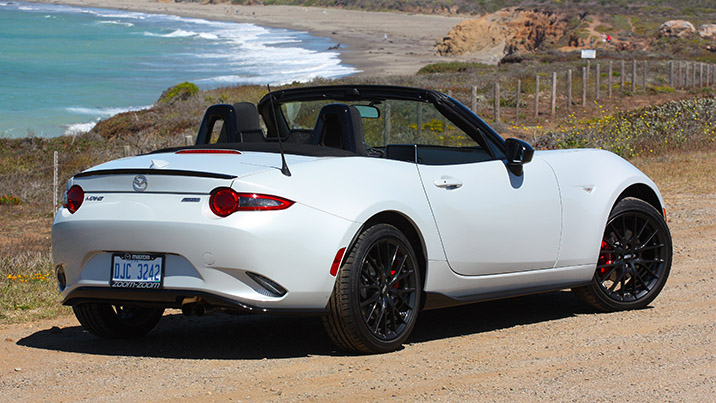 I love the new Miata, and I've had the privilege of driving it in many different locations – Spain, at home in Detroit, and now along America's Best Coast, California. In terms of cars to drive from Santa Barbara to Monterey up the Pacific Coast Highway, none could have been more perfect than the MX-5. I got a pretty wicked sunburn, but it was worth it. In terms of ways to spend a Thursday at work, driving a Miata alongside the Pacific Ocean was one of the best days I've ever had. 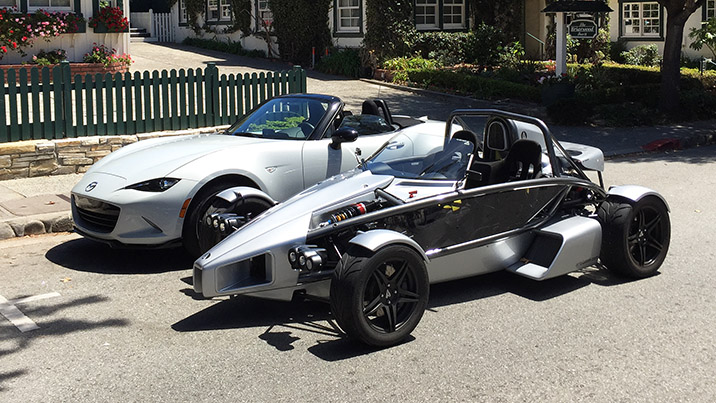 Caveat alert: While I technically drove the Ariel Atom, it was only for a super short amount of time. I was supposed to get a longer test, but the journalist who drove it before me reported some issues with the clutch, so the car's handlers were hesitant to let me take it out for a proper drive. Instead, I got two laps around downtown Carmel in the Atom. To all the pedestrians I freaked out while launching the thing in first gear as often as possible – sorry I'm not sorry. This car is a hoot, even if you only get to drive it for a few minutes. I even parked it next to the Miata for a proper "look how awesome my day was" photo. 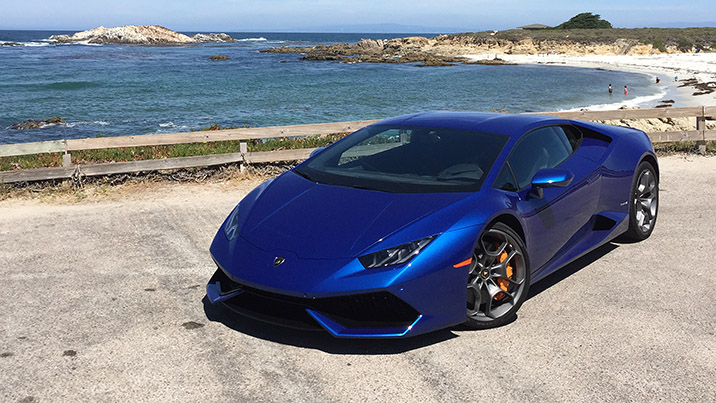 My first Lambo! Really. I've been writing about cars professionally for a decade, yet I'd never driven a Lamborghini until last week. In terms of first experiences, I'm glad I got the Huracán. It's probably not as raw and unhinged as the iconic Lambos of the past, but it was an awesome introduction to the brand. 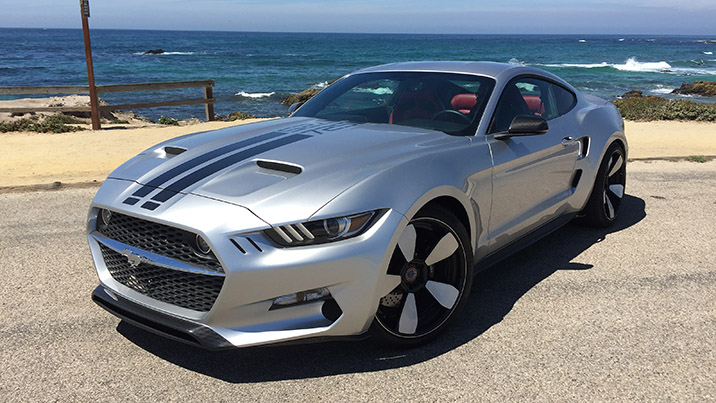 Speaking of stunning... wait, never mind. It's the Rocket, a tuned Ford Mustang created by Henrik Fisker and the folks at Galpin Auto Sports. I already published my full thoughts on this car, so I'll just recap a few real quick. 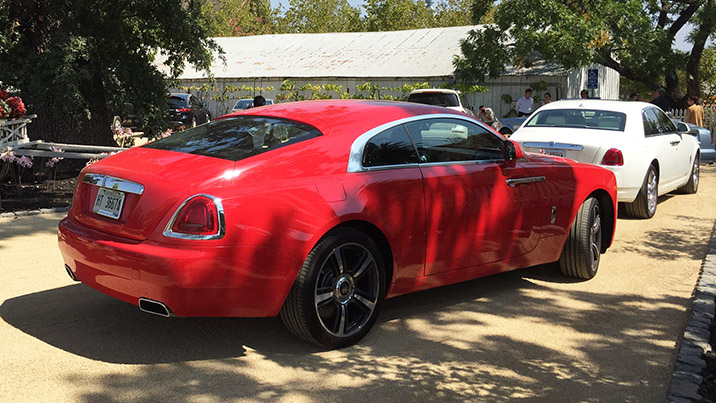 The Wraith is the first of three Rolls-Royce cars on this list. (Fun fact: Of the $2 million worth of cars I tested, these Rollers alone accounted for $1.3 million.) Following the Monterey Car Week festivities, I headed up to Napa Valley for a day of superb luxury – more on that later – with the Wraith as my chariot. Anyone who says Rolls-Royces are big, heavy barges are... well, they're right. But they're also really nice to drive, and the Wraith is definitely my favorite. 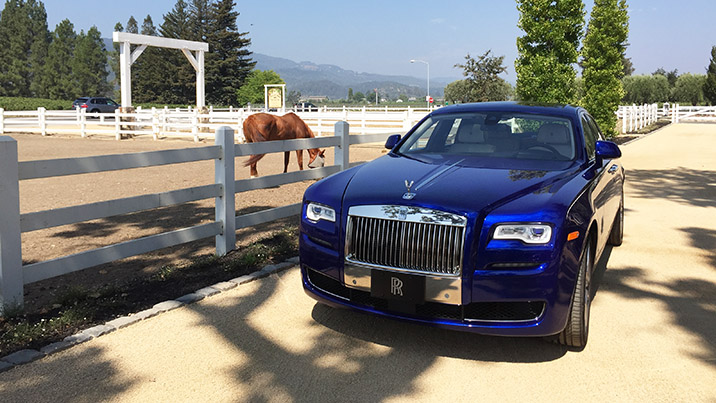 The Wraith may share its platform with the Rolls-Royce Ghost, but the two cars are very different. You need to drive both in order to fully realize that. Of course, the Wraith is more for drivers, while the Ghost is a passenger-oriented machine, but it's still very lovely to steer. 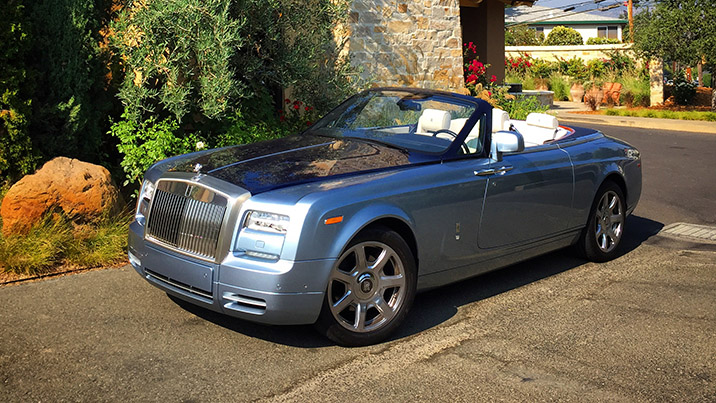 This car was hilarious. The Phantom is super old, but there's nothing like it on the road. It is the pinnacle of Rolls-Royce luxury, and while it's kind of awful to drive from a dynamic standpoint, it's amazing at the same time. I got behind the wheel of the Drophead Coupe on my final leg of the drive from Monterey to Napa, and as far as wine country cruisers go, there's no finer machine than this. It turns heads at every corner. People get the hell out of its way. It's $552,950 of badassery and refinement.


I've got more musings from my week in California to tell, including a story about living the one-percent dream from the back seats of these Rolls-Royces with a belly full of wine. Stay tuned.
X