U of M challenges Silicon Valley for automotive tech crown

Pete Bigelow
A fake city rising from the middle of a Midwestern college campus is more than a proving ground for autonomous and connected car technology expected to revolutionize American roads. It's a lynchpin in Michigan's strategy to stay economically relevant and prevent automotive technology jobs from being poached by Silicon Valley.

Some dignitaries who spoke Monday at the opening of Mcity, a 32-acre test lab that simulates the look and feel of a regular traffic environment, only made oblique references to the competition between Detroit, the auto industry's longstanding home, and the Bay Area, where major OEMs have all opened offices. Others were blunt.

"We are not going to let Silicon Valley take this technology," Senator Gary Peters (D-Michigan) said.

While speaking at the opening of the outdoor facility, located on the University of Michigan campus in Ann Arbor, Peters and others underscored the need for Michigan to remain at the center of the industry's foray into self-driving and connected technology. Their remarks could have been considered harmless civic cheerleading, if the stakes weren't so high.

Automotive research-and-development spending accounts for $11.7 billion each year, according to a Center for Automotive Research (CAR) Group study released earlier this year. The industry as a whole directly employs about 1,553,000 workers directly. Nowhere is that felt more acutely than Michigan, where more than 75 percent of that R&D money is spent, according to CAR Group.

With Google developing dozens of self-driving car prototypes in California, Apple apparently mulling a move into the auto industry, and both companies investing in infotainment systems that will soon appear in hundreds of thousands of cars, many Michiganders have fretted over the industry's westward shift (and don't forget Tesla). Indeed, some question the need for a dedicated autonomous testing lab when Google is already testing self-driving cars on public roads.

Without knocking the value of real-world testing, Jim Sayer, who led Mcity's development and works as a scientist at the University of Michigan's Transportation Research Institute, said there's a need for a simulated facility. Mcity offers a closed system where the cityscape and roads are built to the same precise standards as what's in use in the real world.

"We needed some place just like the real world, but one where we could control and test things 100 times exactly the same way," Sayer told Autoblog. "It's pretty hard to get a pedestrian on the sidewalk to go across and start again so that you can test the technology on your car. So it's about the repeatability. There are companies doing testing in simulated roadway environments, but not actually built with the curbs and signage. This is the first example of its kind anywhere." 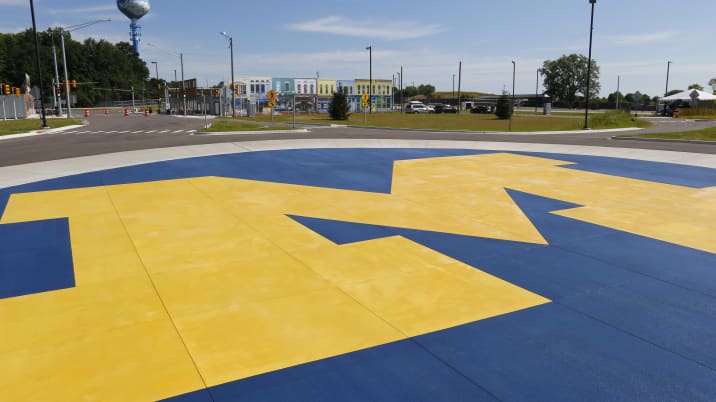 Mcity isn't the only potential testing lab for this sort of technology in the state. In June, federal officials awarded a $247,000 grant to an economic-accelerator group working to redevelop the old Willow Run factory, which churned out airplanes at the rate of one per minute during World War II, into a connected-car development center.

The difference: As of Monday, Mcity is now open for business. It cost approximately $6.5 million to build the facility, which sits on the university's North Campus on land formerly owned by pharmaceutical giant Pfizer. Mcity is the result of a public-private partnership between the university, governments and 48 OEMs and automotive suppliers. The area is divided into two basic areas – one for high-speed testing that simulates a highway environment and the other, a fake downtown area with suburban streets, for lower-speed experiments.

Mcity could typically accommodate up to two companies interested in testing technology at a given time, but on Monday there were a half-dozen showcasing the sort of testing they expect do at the facility. Among them: Honda demonstrated a pedestrian-detection system that warns drivers of unseen pedestrians and applies autonomous braking, Verizon showed off a prototype digital license plate that could streamline the registration and renewals processes, and Delphi showcased a camera-based technology that allows a car to detect when its drivers' eyes and head are not focused on the road. And a University of Michigan professor detailed a car-sharing experiment that relies on a 3-D printed, electrically driven, autonomous cart.

Peters enjoyed hands-on demonstrations of the exhibits Monday, just as he enjoyed a spin in a Google self-driving car about two years ago, which was a new experience for Michigan's junior senator. "I like to drive a car, and I like to be in control," he said. "We were going down the road, and another car came into our lane and it reacted very nicely, and it's all pretty amazing. The Google folks were strutting their stuff. Well, they've got nothing on us. This is the center of the universe." Later, he articulated a more specific version of that universe and it's proximity to Silicon Valley, saying, "This will still be the center where you see most of the intellectual work being done."