The Takata airbag inflator recall from FCA US is growing 88,346 vehicles larger in the US after the company's discovery of the faulty parts in the 2008-2010 Dodge Challenger. The affected examples have production dates between September 19, 2007, and October 29, 2010, and the coupes need the replacement components on the driver's side. According to chronology posted by the National Highway Traffic Safety Administration ( as a PDF), the automaker was auditing the models covered under the campaign in July and "identified a population of vehicles that was inadvertently excluded."

Initially, FCA believed these cars were using an unrecalled Takata inflator. The audit revealed that the affected cars indeed used a recalled version. As with the rest of the faulty parts, exposure to moisture can cause them to ignite too quickly during an airbag deployment and spray shrapnel at occupants. The problem has been linked to at least eight deaths worldwide and a vehicle fire in Japan. The Challenger wasn't previously part of FCA's 3.3-million unit national campaign or the subsequent expansion.

According to FCA US the parts to complete the repairs in these Challengers aren't currently available. However, owners will be notified of the issue by mail starting August 14. They will receive a second notice when the parts become available.

SUMMARY:
Chrysler (FCA US LLC) is recalling certain model year 2008-2010 Dodge Challenger vehicles manufactured September 19, 2007, to October 29, 2010. The affected vehicles are equipped with a dual-stage driver frontal air bag that may be susceptible to moisture intrusion which, over time, could cause the inflator to rupture.

CONSEQUENCE:
In the event of a crash necessitating deployment of the driver's frontal air bag, the inflator could rupture with metal fragments striking the driver or other occupants resulting in serious injury or death.

REMEDY:
Chrysler will notify owners, and dealers will replace the driver's frontal air bag inflator, free of charge. Parts to remedy the vehicles are not currently available. Interim notices will be mailed to owners beginning August 14, 2015. Owners will be sent a second notice when remedy parts become available. Owners may contact Chrysler customer service at 1-800-853-1403. Chrysler's number for this recall is R37. 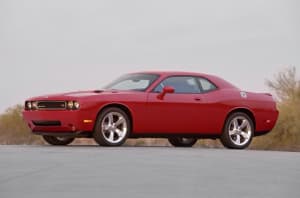