We're sitting 8,700 feet above sea level in the idyllic old mining town of Dunton Hot Springs, nestled deep in the Rocky Mountains of Colorado. We've come to drive the newest and cheapest Mercedes-Benz, a midsize work van called the Metris. As the day begins, Mercedes van boss Bernhard Glaser states the obvious, "We're setting up camp in the US."

It's a good line, perhaps a little too fitting given our surroundings, but it's accurate. Though the US commercial van market is dominated by Ford and General Motors, Mercedes has staked out a competitive position and is digging for more. The tall, capable Sprinter relaunched with a Mercedes badge in the United States in 2010 and has grown into a $1-billion enterprise in America. Now comes Phase 2, dubbed "Mission Metris," starring a tweener van that's smaller than the towering Sprinter yet larger the Ford Transit Connect and Nissan NV200.

The 2016 Metris enters a crowded and evolving segment that also includes the Ram ProMaster City and GM's super-old Chevy Express and GMC Savana. Mercedes will sell the Metris in cargo and passenger forms, meaning it will be outfitted for a range of roles, including taxi and limousine companies, delivery duties, service, and maintenance. Yes, your cable guy might show up in a Mercedes. 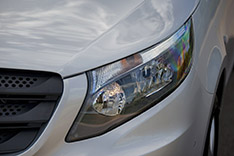 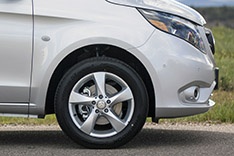 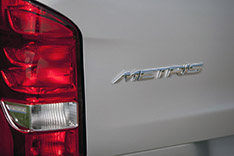 That's part of the plan, actually. Though the Metris was engineered to be a pack-mule of a van, if the shine of the star on its grille helps attract new buyers – like a chain of upscale hotels that needs a fleet of shuttles – all the better.

Our short test drive begins outside the small canyon town of Dolores, CO, as we haul four people and some luggage to the airport in a pre-production Metris. Normally test programs staged by automakers are a little contrived – many feature an off-road course or track time for even the most mundane vehicles – but our stint behind the wheel of the Metris is almost exactly how the van could be used in real life. We make our way along Colorado's winding highways, cruising around 60 miles per hour for much of it. The Metris offers an excellent view of the road and the snow-capped mountains that rise in the distance. It's an easy van to drive. We don't feel like we're piloting a U-Haul or something else cumbersome. Mercedes is billing this as the 'right-sized' option, and our initial impressions support that sentiment as we navigate the curves flanked by steep drop-offs. The Metris is fairly quiet inside, especially up front, where we can carry on an easy conversation with Glaser, who is riding shotgun. The second and third rows get a little louder and less comfortable when we're back in the passenger area, though they have ample leg- and headroom. The chassis does an acceptable job of cushioning bumps and road ruts, which we feel often enough, though it's inline with other work vans. 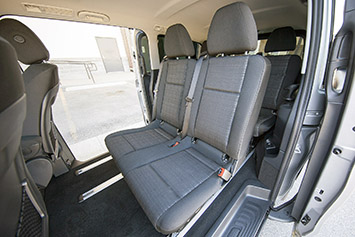 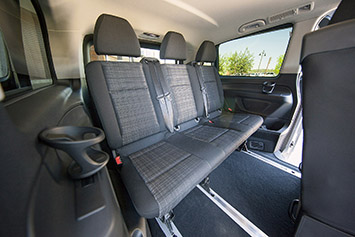 The Metris is powered by a familiar engine: Mercedes' 2.0-liter turbocharged four-cylinder that's found in the CLA- and C-Class, rated at 208 horsepower and 258 pound-feet of torque. Paired with the company's widely used seven-speed automatic transmission, the four-cylinder delivers an appropriate amount of performance. Acceleration is solid from starts, and there's decent pull in the middle of the range. There are also paddle shifters designed to help the driver brake when descending a hill, though the situation doesn't warrant that technique. As we cruise, we take note of Metris' unexpectedly good reflexes, and the brakes and steering offer more feedback than expected. We receive communication from the electromechanical steering, which has weight on-center that increases as we dial in our inputs. The brakes have a small amount of pedal travel and then they begin to grab, scrubbing speed effectively.

Our test model is loaded and is priced accordingly, stickering just north of $42,000. That means our van has things like perforated black leather grips on the steering wheel, navigation, and lane-keeping assist. Base Metrises are much cheaper, though, with the cargo van starting at $29,945 and the passenger version beginning at $33,495 (including the $995 destination charge). They come standard with a color audio screen, driver aids like attention assist and crosswind assist, and 17-inch steel wheels. 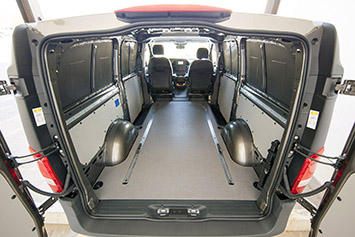 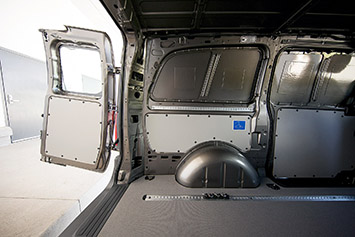 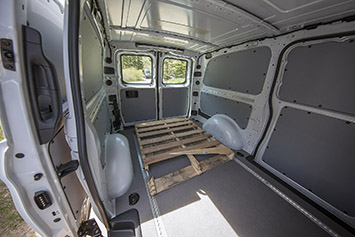 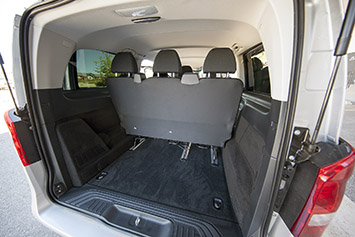 The vans use then determines some of the subsequent features. A passenger variant can be outfitted to seat up to eight, equipped with a suspension tuned for comfort. There's an additional sliding door on the driver's side, tinted windows in back, an air conditioning system mounted in the D-pillar, and available electric sliding doors. The cargo version, meanwhile, can accommodate payloads up to 2,502 pounds and has 186 cubic feet of room in back.

The Metris certainly looks the part of a work horse. Though shorter than the Sprinter the Metris still stands 74.8 inches tall, with creased sides, angular headlights, and a prominent Mercedes grille. It has the stance of the commanding European-style work van, without looking too vertical or overbearing. 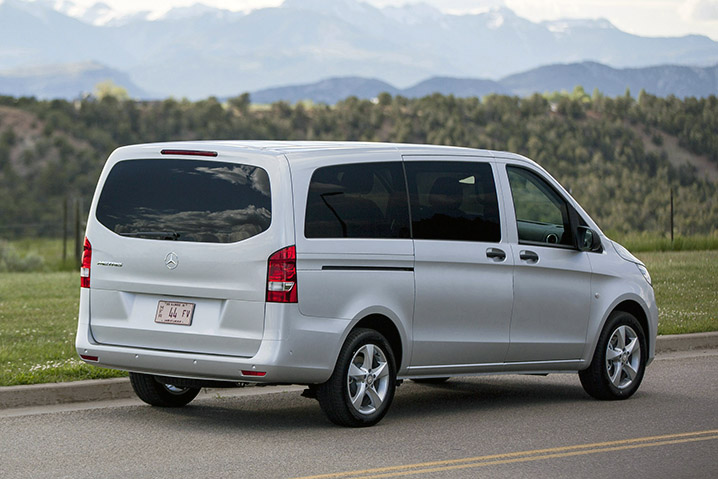 For now, the Metris only comes with rear-wheel drive, though Mercedes is open to adding four-wheel drive (like it did for the Sprinter for the 2015 model year). A diesel is available for the Metris in Europe (where it's called the Vito), but Mercedes decided against it for now because it expects the Metris will get more city use in the United States.

As evidenced by the drivetrain, Mercedes has carefully considered the Metris and its possible uses in the US market, but it's also open to evolving the product. Vans date back almost as far as cars in the rich history of Mercedes, and they're a major part of its business model around the world. Now that strategy comes the United States. Our short test drive showcased the potential. Yes, Mercedes has pitched a tent in the van market, but it's building a permanent home in America.