Boldly Going Where No FedEx Driver Has Gone Before On the flight out to Kelowna, British Columbia, Canada, I thought I had a pretty good idea of what to expect on the Mercedes-Benz Sprinter 4x4 launch. I figured I'd drive down gravel and dirt roads, and then I'd take a Sprinter on a brief, pre-planned, crawling off-road course with Mercedes guides helping me along, Perrier water and fresh pastries at every third checkpoint. I've done off-road drives before, and while they do a perfectly nice job of showing the capability of a vehicle and its four-wheel-drive system, they're usually somewhat predictable and, I guess, safe.

I also knew I'd be going to the middle of nowhere, but I assumed that'd just be a small town nestled in the Canadian Rocky Mountains. You know, a city anchored by its ski resort, but with all the amenities of a fully functional community. Something like Revelstoke, BC, where I spent my first night on the trip – kind of out in the wilderness, but a place where my iPhone could still pick up a solid 4G signal.

But 24 hours later I found myself in a truly remote, off-the-grid part of the world, faced with a route that was anything but pre-arranged. And I wasn't in a G-Wagen, or some other off-roader – I was going to do all of this in a Sprinter van. Of course, this wouldn't be the first time Autoblog has taken a Sprinter far, far off the beaten path, and isn't the first time we've driven this generation of Mercedes' van. 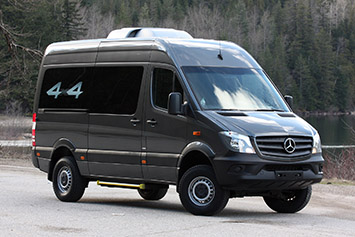 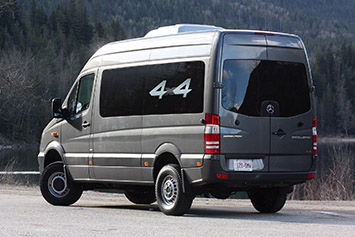 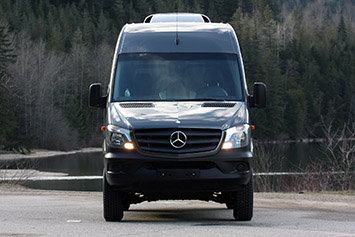 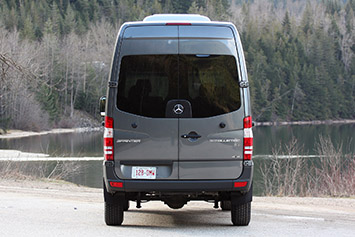 Home base was the CMH Monashee Lodge in Mica Creek, BC – a location so out-there that, according to Wikipedia, it "is no longer incorporated as a village." I had lost cell signal some 50 miles back, and the lodge was the only thing around, with its small staff, my fellow journalists and the Mercedes handlers the only human beings inhabiting the area. (Wait, haven't I heard this one before?)

The drive from Revelstoke to Mica Creek was easy – 56 miles, all on Canada Highway 23 that runs alongside the Columbia River. It was breathtaking, with mountain forests still covered in snow from the winter, and the (mostly) thawed river flowing peacefully to my left as I drove north. There were no telephone poles, no stoplights and no traffic save the occasional logging truck. The road signs didn't point to exits toward other towns, but instead warned of possible run-ins with moose or bears, and let me know not to stop on specific parts of the highway unless I wanted to experience an avalanche up close. 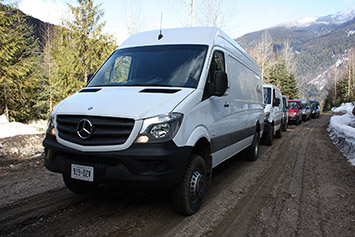 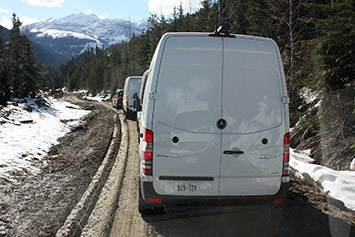 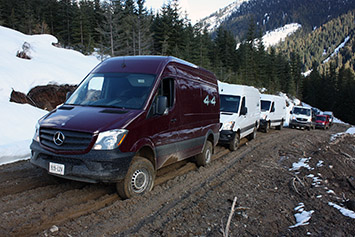 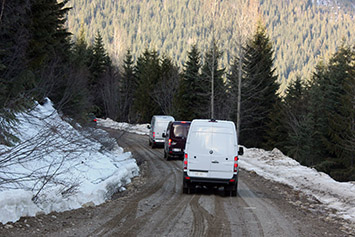 I spent time behind the wheel of both short- and long-wheelbase Sprinters, in 12-passenger and cargo van configurations. Because these are first and foremost work vans and shuttles, the interior is designed for utility first and comfort second; hard plastics are found throughout, the comfortable seats are covered in cloth, and technological wizardry is limited to things like a simple version of the Mercedes COMAND system. Keep in mind that despite a design refresh in 2014, this generation of Sprinter dates back to 2006. But what it offers inside is comparable to everything else in the expanding large van class. Of course, it's still the Mercedes of work vans, even if that's now just limited to the badge alone.

I can't say the Sprinter would have been my first choice for the Highway 23 commute, but credit where credit is due, the Mercedes van excelled on these long hauls. It was easy to drive – light, but direct steering, excellent maneuverability, fantastic visibility, solid brakes with linear pedal feel, and a generally comfortable ride. Makes sense, since the flower delivery folks and airport shuttle drivers who operate Sprinters spend all day behind the wheel, navigating everything from expansive highways to narrow city streets – and now, snowy, muddy mountain passes, thanks to the addition of four-wheel drive.

That four-wheel-drive system is controlled by a button to the left of the ignition, and can be activated at speeds up to six miles per hour (see the demonstration video, above). When engaged, engine power is spread at a default 35/65 fore/aft split, assisted by the 4ETS traction control system that brakes individual wheels to assist forward progress. There are no locking differentials, but Mercedes does offer a low-range setup with a 1.42 reduction gear, which can be engaged when the Sprinter is stationary. What's more, Mercedes lifted the Sprinter 4x4 a bit, increasing ride height by 4.3 inches up front and 3.1 inches at the rear, compared to two-wheel-drive vans.

The 4x4 system is optional on Crew Van, Passenger Van, and select Cargo Van models, adding $6,500 to the price, or $6,800 if you want that low range gearing. That said, you'll also need to shell out $985 for the Sprinter's optional V6, as the 4x4 package is not available on models equipped with the new, 2.1-liter four-cylinder diesel that was introduced during the 2014 refresh. The six-cylinder engine used here was carried over from the pre-facelift Sprinter – a 3.0-liter turbodiesel V6 with 188 horsepower and 325 pound-feet of torque, mated to an ancient but incredibly smooth-shifting five-speed automatic transmission. 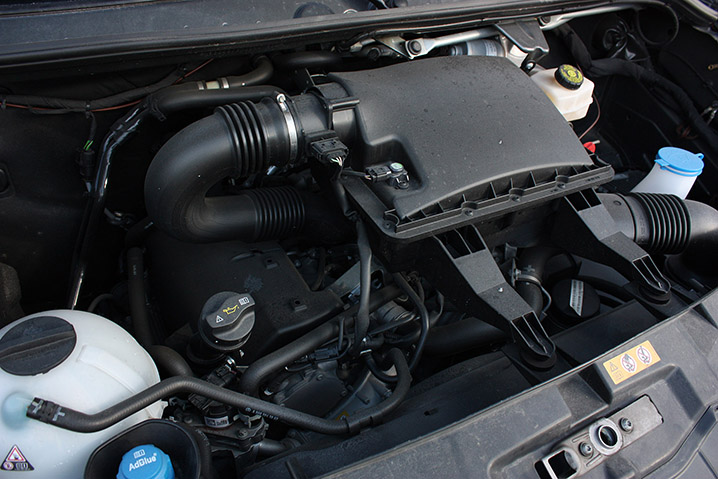 Considering the size and weight of the Sprinter, 188 hp and 325 lb-ft hardly made this van feel like a rocket, but with only two passengers and a small bit of luggage on board, it easily powered me up long stretches of uphill climbs and, more importantly, offered enough grunt to get those wheels moving through some thick, deep mud. Speaking of wheels, the Sprinter tested here rode on standard-issue 16-inch steelies, wrapped in light-truck-spec winter tires (snow rubbers are required in British Columbia through the end of March).

It's best to think of the Sprinter 4x4 as a Sprinter AWD, since, again, all the differentials remain open . Furthermore, 4ETS is found on Mercedes' M- and GL-Class SUVs, and as I learned when the going got tough, if a GL350 BlueTEC couldn't handle the terrain, neither could the Sprinter 4x4.

As I said, I assumed I'd test the 4x4 capability on an off-road course designed by Mercedes, but that wasn't the case. Instead, the caravan of Sprinters was pointed up a steep, active logging route – a 'road' only traversed by huge semi trucks that haul timber down from the mountains. The event team had scoped out this route earlier in the season, but because of the thawing land, melting snow, and rain British Columbia had experienced recently, the terrain had changed before my test drive. 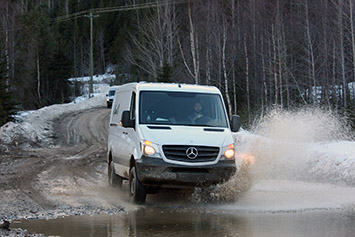 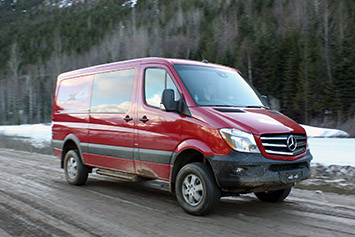 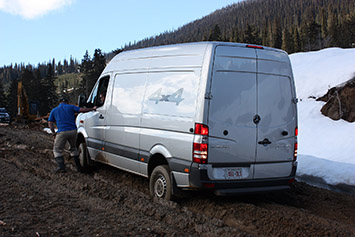 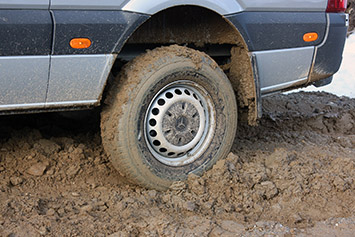 With four-wheel-drive engaged, the Sprinters had no trouble getting up the initial climb. The pack consisted of a mix of 140-inch-wheelbase 2500 passenger and cargo vans, and 177-inch-wheelbase 3500 cargo vans with dual-rear-wheel setups (which look awesome with snow tires, by the way). I had to keep moving so the wheels wouldn't get bogged down in the mud, and since the earth was constantly changing as I drove over it, there were times where I was instructed to hug the left or right sides of the path, in case some ground broke away.

With its 35/65 power split moving all four wheels, the Sprinter was capable in most scenarios. A heavy right foot kept the V6 power flowing, and at times, it was necessary to give more throttle input than I thought was necessary, just to keep momentum and avoid getting the huge van stuck. But as I reached an elevation of about 3,000 feet and the path got super gross, our lead car – that GL350 BlueTEC – had trouble getting through some mud. Because the pack stopped while the GL struggled, this proved problematic for the first couple of Sprinters in line. There I was, in the middle of nowhere, on the side of a mountain, with a stopped convoy of vans, watching as Mercedes support teams worked together to shovel mud out of the way and direct the stuck vans through the muck. But at least I got to take in that scenery and fill my lungs with gorgeous mountain air. See my recount of the experience for yourself in the On Location video below.

On the way back down the mountain, the Sprinter's easy-to-drive manners were a welcome relief. The narrow footprint made it easy to follow specific paths through the mud, and the light steering effort, good brakes, and ample torque from the turbodiesel V6 meant that, as a driver not used to this sort of terrain, getting through the rough patches was a breeze. It certainly wasn't what I expected, but the Sprinter 4x4 handled everything I threw at it.

Really, that's the whole point with the four-wheel-drive Sprinter. It wasn't designed to be an off-road crusher like a G-Class. Instead, Mercedes fitted its work van with all-terrain capability because there are times where Sprinter-driving workers need to get to gross parts of the world. People live in some seriously remote locations, and they need to have packages delivered. Work crews need to move people and things up the sides of mountains, and now, with the Sprinter 4x4, they can do so with more ease than ever. 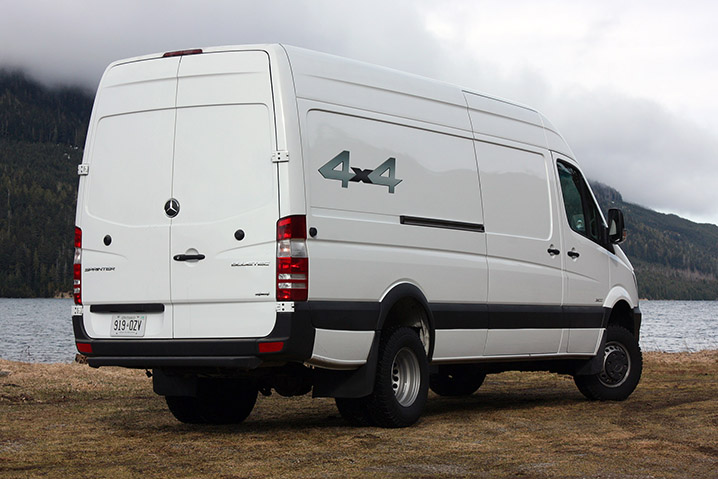 Mercedes said the Sprinter 4x4 is already off to a good start in terms of sales – the four-wheel-drive van is sold out until October. Moving forward, four-wheel-drive will continue to be part of the Sprinter strategy, and production will ramp up, especially when Mercedes' new van facility comes online in South Carolina.

The addition of four-wheel drive means Mercedes now offers capability in this segment that newcomers like the Ford Transit and Ram ProMaster do not. The 4x4 variant doesn't change anything about the already capable Sprinter formula, it only enhances the appeal. With the push of a button, it allows drivers added prowess for when road conditions are less than ideal. After all, a FedEx driver can assume that his delivery route won't include muddy routes up a logging route, but it's good to know this upgraded Sprinter provides sure-footed assurance when the anticipated smooth road ahead proves to be anything but.