Strong-Selling CUV Puts On A Prettier Face In New York Posting its best-ever sales year in 2014, the GMC Terrain is hauling in sales, conquest buyers, and profits for the brand. GMC wants that to continue with its refresh for the 2016 model year, which sees the underlying formula left untouched under a raft of cosmetic and trim changes.

There will be four trim levels: SL, SLE (SLE-1 and SLE-2), SLT, and Denali. They all get a front fascia with a lot more character, sculpted with chrome-outlined, C-shaped ornamentation, and all but the base SL version feature chrome accents on the grille. Flanking that, the headlights get new LED DRL signatures and the hood gets a power dome. The Denali gets new 19-inch alloys, models below it get new 18-inch wheel designs, and the sheetmetal color palette expands with the addition of White Frost Tricoat and Crimson Red Tintcoat.

Beyond a revised center console, a mix of cabin offerings spice up the various trims. Premium cloth is the go-to for the SL and SLE, "Saddle Up" leather is an option on the SLT as well as an eight-way passenger seat, and a two-tone, dual-material Light Titanium and Jet Black interior is possible inside the Denali.

Assistance features migrate down, with Side Blind Zone Alert and Rear Cross Traffic Alert available on the Terrain SLE and SLT for the first time. Engine choices remain the 182-horsepower Ecotec 2.4-liter inline-four, and the 272-hp 3.6-liter V6. The press release below has more details, and we'll have more on it live from the show floor.

NEW YORK, March 31, 2015 – Distinguished by a new, more contemporary front-end appearance, the 2016 GMC Terrain and Terrain Denali were introduced today, ahead of their public debut at the New York International Auto Show.

"Terrain is a popular choice in the growing compact SUV segment, introducing drivers to GMC's professional grade design and features," said Duncan Aldred, vice president of GMC Sales and Marketing. "The changes for 2016 provide consumers with even more reasons to consider Terrain as it continues to be a smart choice for customers seeking versatility, style and technology."

The compact SUV market leapt 17.4 percent in 2014 to account for 15.7 percent of the total U.S. market, overtaking midsize cars for the first time as the auto industry's largest vehicle segment.

Terrain had its best year ever in 2014, after launching in 2009, with 105,016 sales. The momentum continues this year, as Terrain enjoyed its best-ever January and February sales.

The New York region is the national leader for compact SUV sales, with more than 200,000 retail units sold last year. It is also second-highest selling region for Terrain, behind Detroit.

Bold design tops many customers' reasons for purchasing the GMC Terrain and the updated 2016 models retain the distinctive proportion that attracts first-time buyers to the brand with a greater focus on precision and attention to detail.

"The updates for the 2016 Terrain make one of the strongest designs in the compact SUV market even more compelling," said Helen Emsley, executive director, Global GMC Design. "They create a more contemporized appearance rooted in GMC's professional grade precision."

Terrain at a glance
The 2016 Terrain seats five, with all-wheel drive offered on SLE, SLT and Denali models. Its interior – with the GM-exclusive MultiFlex sliding rear seat – offers 31.6 cubic feet (894 liters) of cargo space behind the rear seat and 63.9 cubic feet (1,809 liters) with the rear seat folded.

Available GMC IntelliLink offers OnStar with 4G LTE connectivity and built-in Wi-Fi hotspot. It provides a mobile hub for drivers and passengers to stay connected. The hotspot is on whenever the car is on and comes with a three-month/3GB data trial (whichever comes first).

Terrain also offers a programmable power liftgate (standard on Denali, available on SLT), with a memory function that stops the liftgate at a chosen height to help shorter drivers or accommodate low garage heights.

Terrain Denali
The Terrain Denali offers unique exterior and interior appointments, exclusive wheels and design cues to set it apart from competitors. Dual-flow dampers are exclusive to the Terrain Denali's suspension system, providing a smoother ride and improved handling by controlling suspension dampening across a broader range of driving conditions.

The 2016 Terrain goes on sale this fall. Pricing will be announced later.

About GMC
GMC has manufactured trucks since 1902, with innovation and engineering excellence built into all GMC vehicles. The brand is evolving to offer more fuel-efficient trucks and crossovers, including the Terrain small SUV and Acadia crossover. GMC's highest-volume vehicle, the Sierra pickup, is the most powerful light-duty pickup on the market, and the first full-size pickup to receive the highest-possible five-star Overall Vehicle Score for safety since the National Highway Traffic Safety Administration changed its New Car Assessment Program for the 2011 model year. Details on all GMC models are available at http://www.gmc.com/, on Twitter at @thisisgmc or at http://www.facebook.com/gmc. 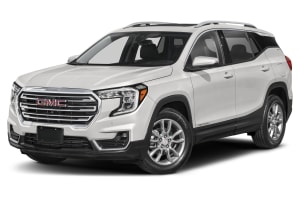 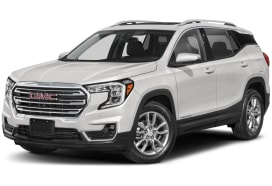 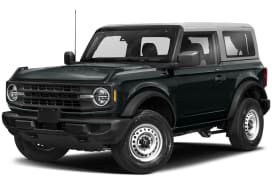 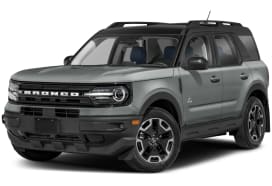 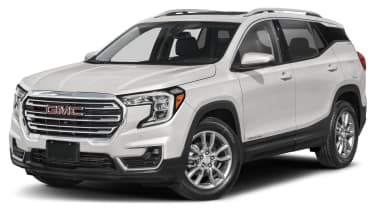 $740 - $1,299 Nat'l avg. savings off MSRP
See Local Pricing
I'm not in the market for a vehicle at this time. Please move this suggestion to the side for 30 days.
Huge Savings