It's been a dozen years since Aston Martin first introduced the DB9 to the world, and while it has undergone numerous revisions and updates over the course of its lifetime, twelve years is a long time. Fortunately the British automaker is preparing to launch a new version, and that's just what our shooters in Eiffel have spotted running around the Nürburgring.

Now it's hard to tell much from these spy shots, because the prototype they depict is mostly wearing the bodywork of the existing DB9. So all the interesting stuff is happening beneath the skin. But it does appear that the front end is wider, giving the next-generation model – whatever it will ultimately be called – a wider front track and more room in the engine bay.

Those who've been following the news will know that Aston has signed a deal with Mercedes-AMG that will see the German automaker's performance division supply it with a new powerplant, but that's not expected to be ready for the DB9 successor's arrival. Look for it to pop up in production guise sometime next year, then, with an evolution of Gaydon's long-serving and ubiquitous 6.0-liter V12 engine that's already developing 592 horsepower in the Vantage GT3... excuse us, Porsche: " GT12." 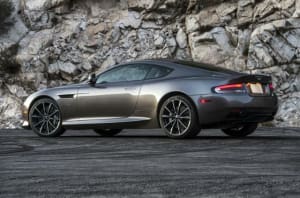