Next Honda Civic to get 1.5L turbo 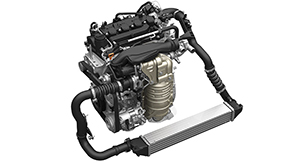 The low-displacement, turbocharged engine is all the rage these days throughout the auto industry, whether considering the 1.0-liter, three-cylinder EcoBoost from Ford or even Ferrari opting for a downsized turbo V8 in the latest 488 GTB. It looks like Honda might be the next one to follow this trend, and it could happen as soon as the next-gen Civic.

"Downsized turbocharging will be the base, even for the Civic," Honda Research and Development boss Yoshiharu Yamamoto said to Automotive News. That included the US, he indicated. "Quite a bit will switch over to turbo, but there will still be some naturally aspirated ones remaining."

The engine reportedly is a turbocharged 1.5-liter four-cylinder that offers better fuel economy, lower emissions and the power of a naturally aspirated mill of between 2.0- and 2.4-liters, according to AN. Since the current Civic gets 143 horsepower from its 1.8-liter four that suggests a healthy power bump for the future model.

Making the news even more tantalizing, the new Civic with the 1.5-liter turbo could be revealed before the end of the year, according to Automotive News. Honda already confirmed a $340 million investment into its Anna, Ohio, plant to build the engines later this year.

Honda first mentioned a 1.5-liter turbocharged four-cylinder in 2013 along with the 2.0-liter turbo now in the Civic Type R in Europe. At the time, the brand said these engines would appear in "a number of future global models." The HR-V in the US was also previously rumored to use the same powerplant.