Adam Morath
As a fan of the boxy Jeep styling of old, I was disappointed when photos first leaked of Jeep's revived Cherokee in early 2013. Then the midsize crossover arrived in Autoblog's longterm garage in May of 2014 and my opinion did a 180.

I was prompted to rethink the exterior design of the vehicle after reading our reviewer's interview with head Jeep designer Mark Allen. "The previous, blocky Cherokee was so aerodynamically inefficient, it would be wrong to do it," Allen told Autoblog's Jonathon Ramsey.

That made sense. After all, Jeep is a brand associated with the outdoors, so its only natural that they seek to produce efficient, yet capable vehicles. It was then I began reconsidering the sleek lines of the new Cherokee. What once seemed bland and rounded now appeared streamlined and purpose-built. I also give Jeep credit for the slim headlamp silhouette, which look like no other SUV on the market – a far cry from the distinct circular lamps on Wranglers or squared headlights of past XJs.

As I drove our long-term Jeep Cherokee Trailhawk on a few road trips, my affinity for the vehicle's comfortable interior grew as well. The seats held up to a nine-hour trek to Montreal, and the Chrysler Uconnect system made navigating the roads and the radio a breeze.

Above you'll hear my early impressions of the Cherokee, and below you'll find a previous long-term update featuring Autoblog's Steven Ewing and Chris McGraw. 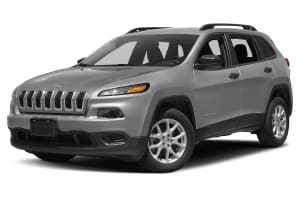