Goodyear imagines a tire that can charge your EV

The BH03 Tire Concept Remains A Fanciful Idea, But A Cool One 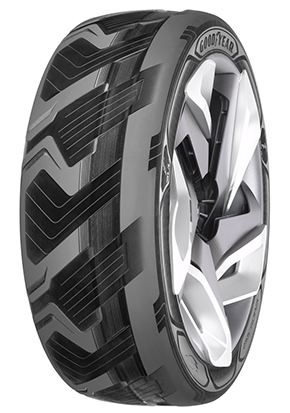 Tires might seem like just round hunks of rubber and metal belts, but a lot of technology goes into them. At this year's 2015 Geneva Motor Show, Goodyear is showing off two conceptual products that imagine the future of this automotive necessity.

Cars are already capturing some of the power they spend driving using systems like regenerative braking and harvesting energy when coasting. Goodyear is taking that to the next step with its BH03 tire concept that can produce electricity from the heat that's created just by rolling along. This solution would supply a constant trickle of charge as long as the vehicle is moving.

The second concept is called the Triple Tube, and it can actively adjust the tire to the environment. As the name suggests, there are three tubes located under the tread, and they're positioned at the two shoulders and at the center. An internal pump would adjust the air pressure in each one to three different settings. One mode would maximize the inflation across the board for better economy and less rolling resistance. Another would improve the contact patch for better handling, and the third would fill the center tube during wet weather to reduce aquaplaning.

Goodyear spokesperson Rob Whitehouse tells Autoblog that both of these designs are "extremely conceptual at this point." However, they show what's possible with future technology and you can see more in the video below. Though the two tires are concept products, the futuristic technologies stretch the imagination and provide a glimpse of what practical innovations may be on the horizon.

"These concept tires reimagine the role that tires may play in the future," said Joe Zekoski, Goodyear's senior vice president and chief technical officer. "We envision a future in which our products become more integrated with the vehicle and the consumer, more environmentally friendly and more versatile."

This tire generates electricity through the action of materials in the tire that capture and transform the energy created by heat when it flexes as it rolls during normal driving conditions. The materials used would optimize the tire's electricity generation capabilities as well as its rolling resistance.

As demand for electric cars grows, this technology has the potential to significantly contribute to the solution of future mobility challenges.This visionary tire technology could eliminate the vehicle-range anxiety motorists may have with electric cars.

This tire features three internal tubes within the tire. Tubes are located beneath the tread and near the inboard and outboard shoulders of the tire as well as the center. The tire relies on an internal pump that moves air from the main air chamber to the three individual air chambers, or tubes. The tire automatically adjusts – on its own – to three different positions based on road conditions.

The Eco/Safety position – with maximum inflation in all three tubes – offers reduced rolling resistance.
The Sporty position – with reduced inflation within the inboard shoulder tube – gives drivers dry handling through an optimized contact patch.
The Wet Traction position – with maximized inflation in the center tube – provides high aquaplaning resistance through a raised tread in the center of the tire.
Although these tires are future concepts, Zekoski says they represent an essential aspect of Goodyear's innovation strategy, instilling a forward-looking, market-back mindset in the company's research and development teams.

"It is more important than ever for us to stay firmly rooted in our market-back innovation process, which calls on us to focus on, and anticipate, the rapidly evolving needs of our customers," said Zekoski.

Goodyear is one of the world's largest tire companies. It employs approximately 67,000 people and manufactures its products in 50 facilities in 22 countries around the world. Its two Innovation Centers in Akron, Ohio and Colmar-Berg, Luxembourg strive to develop state-of-the-art products and services that set the technology and performance standard for the industry. For more information about Goodyear and its products, go to www.goodyear.com
X