Hyundai Genesis Coupe spotted with rumors of a V8 underhood

Our spy shooters have captured a Hyundai Genesis Coupe mule testing in Sweden. This is merely the current body cut-and-pasted to fit new internals, so don't be disappointed by its looks; we're looking forward to inspiration from the HCD-9 and perhaps grand touring inclinations on the production car whenever it appears.

The photographers said they noticed the hood's been modified, perhaps to clear the 5.0-liter V8 from the Genesis sedan. That engine would be part of the plan to push further upscale said to be planned for the Genesis Coupe, along with the fender arch cutouts on this mule that push the wheels to the corners for a longer wheelbase that will make more room for passengers. Rumor has been that the next car will do a much better job of swallowing four adults.

The company's HTRAC all-wheel drive is expected to be an option, Hyundai having said five years ago that the feature is being engineered into the Genesis family platform. A reveal probably won't come until sometime in 2016. 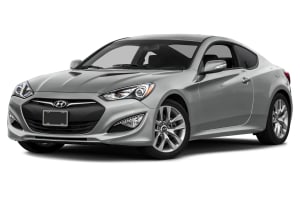