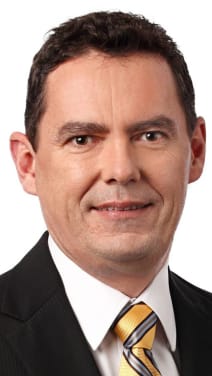 Back in October, Gerry Dorizas stepped down from his post as head of Holden after just eight months on the job. General Motors named the brand's CFO Jeff Rolfs as interim managing director in the meantime, but rather than keep the job, later this year he'll be handing the reins over to Mark Bernhard instead.

Bernhard started out at Holden in 1986 and has since held a number of roles for GM in locations around the world, including Switzerland, Detroit and Singapore. He returned to Australia as Holden's CFO in 2007, and most recently served in the same capacity at Shanghai GM. Over the years he's overseen the financial consolidation of GM's international operations, the acquisition of Daewoo and the joint-venture cash-flow between SAIC and GM.

In assuming the role of managing director and chairman of Holden, Bernhard will be responsible for steering the Australian division out of its manufacturing era and into a new one as an importer and distributor of GM products built overseas and imported with the brand's Lion badge on the grille. Moving forward, "more than one third of Holden's future product portfolio will be sourced from Europe," with the Cascada convertible, Astra hatchback and Insignia sedan all to port over from Opel this year.

Mr Bernhard began his career in the automotive industry at Holden in 1986, undertaking senior finance roles across GM's global operations, over the past four decades. He is a former CFO of GM Holden and his current position is Vice President and CFO of Shanghai GM.

Mr Jacoby said that given his background and experience, Mr Bernhard is the right person to lead GM Holden.

"Mark's knowledge of GM Holden, our region and GM's global operations will serve him well in his new role," Mr Jacoby said.

"He will champion the ongoing transition of GM Holden to a National Sales Company and the repositioning of the Holden brand for long-term growth and profitability."

Mr Bernhard briefly visited Australia today to speak with GM Holden dealers and will take up his new role in the third quarter this year. He will succeed GM Holden Interim Managing Director and CFO Jeff Rolfs.

"I want to thank Jeff for taking on leadership of GM Holden on an interim basis. Once the transition with Mark is complete, Jeff will continue to play an important role at GM Holden as CFO," Mr Jacoby said.

"Holden is accessing GM's global operations to assemble its biggest and best ever product line-up. This new model onslaught will ensure Holden has world-class products in every major segment – a true customer-driven product strategy.

"While I can't reveal all the details, I can say that Holden will debut an all-new Barina Spark in the first quarter of 2016, launch a global Captiva replacement and another all-new, world-class SUV to ensure comprehensive offerings in the crucial SUV market segment.

"Supporting this product onslaught is the bold, new Let's Go There brand campaign and an ongoing commitment to achieving best-practice customer service."

- Cascada convertible, Astra hatch and Insignia sedan will launch in 2015;
- Holden vehicles will continue to be tuned and tested for Australian conditions and customers with the retention of the famous Lang Lang Proving Ground in Victoria;
- Holden's Global Design centre continues to contribute to local and global product programs;
- More than one-third of Holden's future product portfolio will be sourced from Europe;
- The esteemed Commodore nameplate will live on with Holden's next-generation large car; and
- Holden will have a true sports car in its future product portfolio.

Mark Bernhard is currently vice president and chief financial officer of Shanghai GM in Shanghai, China, a position he has held since November 2011. He also was a member of the GM-SAIC joint venture's Executive Committee.

Mark began his GM career with GM Holden in 1986, holding various positions in the Finance function.

He relocated to Zurich, Switzerland, in 1996 as Manager of Budgets and Consolidation for the then GM International Operations. In 1998, Mark was appointed Director of Financial Reporting and Analysis for GM International Operations in Detroit. Two years later, he took on the role of Director of Special Projects at GM Asia Pacific in Singapore, working on the acquisition of Daewoo Motor Company.

Mark has a Bachelor of Business (accounting) degree from Monash University, as well as a Master's degree in Business Administration from Deakin University. He is an FCPA with CPA Australia and a graduate of the Australian Institute of Company Directors (AICD).

Mark received the Silver Magnolia Award from the Shanghai Municipal Government, which is given to expatriates for their contribution to the economic development of the city. He also received the 2014 Australia China Alumni Award for Banking and Finance.
X