Making The MP4-12C A Distant Memory View All Specs
Otolith organs are the tiny acceleration-sensing parts of your inner ear that are extremely effective at telling your brain when you are changing velocity. They make easy work of elevator rides, subway cars and most roller coasters, but the organs are completely overpowered by the 2015 McLaren 650S – the acceleration from its twin-turbocharged V8 leaves them dazed and confused, an overwhelming, dizzy sensation topped off with a bout of queasiness.

The British automaker did not intend its MP4-12C successor to be nauseating – despite its effectiveness in this role – but the explosive way the rear-wheel-drive supercar puts its power down is absolutely mind-boggling. We've driven countless other exotics, but it's hard to point to a single example that changes velocity as quickly, and as capably, as this $330,000, carbon fiber, street-legal racer.

Some would consider a $1-million winning lottery ticket the key to happiness. We'd argue that spending five days with a Mako Blue McLaren 650S – barf bag poised in lap – is a much more gratifying prize. 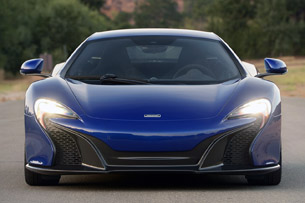 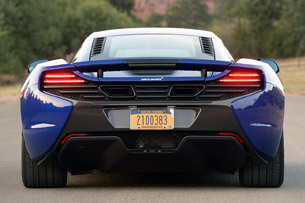 Its new lines are far more distinctive than its predecessor, which was cleanly styled but a bit paint-by-numbers supercar.

McLaren's MP4-12C, launched in the middle of 2011, was a superb sports car. Unfortunately, many who drove it felt that it lacked the final bits of polish, and a sharp, emotional edge, to push it ahead of its Ferrari 458 Italia and Lamborghini Gallardo competition. Not content sitting in the cold shadows of its rivals, McLaren went back to its engineering team and had them diligently rework dozens of components. What emerged, under the quartz lights of the 2014 Geneva Motor Show, was this 650S. The basic architecture, a Formula One-like carbon-fiber tub with front and rear aluminum crush extrusions, was unchanged from the 12C, but the new model debuted fresh styling, refined suspension tuning, more potent brakes and a healthy boost in power.

Mako Blue isn't our first choice from McLaren's nearly unlimited color palette (orange and yellow are stunning), but standing face-to-face with the carbon-fiber-bodied coupe reveals that this paint provides an optimal way to show off the car's P1-inspired styling. Compared to the 12C, the 650 appears more aggressive and decidedly more threatening – both necessary in this emotion-driven segment. Most importantly, its new lines are far more distinctive than its predecessor, which was cleanly styled but a bit paint-by-numbers supercar.

The real crowd-pleasers are its butterfly doors, which open up and away. Yet even without the fear of bumping your head, climbing into the McLaren requires hurdling the wide, exposed lower exterior walls of the carbon tub. The acrobatics are unique, but they aren't difficult to learn and the maneuvers appear effortless to bystanders after some practice. 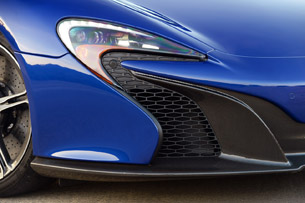 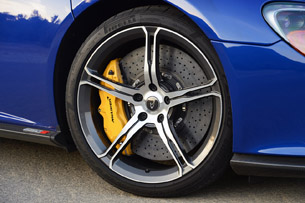 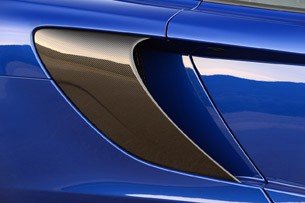 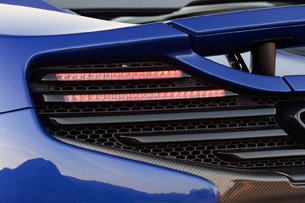 McLaren has minimized and simplified the way the driver interacts with the vehicle.

Once inside, the seating position in the thinly padded carbon-fiber buckets is good. Your author found it comfortable for his six-foot, two-inch frame, even though the seats are on the narrow side of the scale. The overall look is monochromatic, with an abundance of high-quality dark gray Alcantara and smooth leather of the same color covering just about every exposed surface. The only contrast provided in our tester's cabin included splashes of black carbon-fiber on the flying buttress center console and three-spoke steering wheel. Its biggest flaw, if we had to choose one, would be its near-complete lack of useable storage for cups, keys, phones, and so on.

The layout of the cockpit, from an engineering-driven company who once put the operator in the middle of the cabin ahead of the passengers, still bucks most trends. As automakers move to add more and more buttons, switches and dials, McLaren has minimized and simplified the way the driver interacts with the vehicle. An oversized analog tachometer is sandwiched between color digital displays on the primary instrumentation, with a color multifunction display heading the console's stack that includes dials and buttons for vehicle controls. All climate-control functions are located on the driver and passenger door, respectively. The overall aura of the 650S' cabin is pure jet fighter, lacking only the head-up display and weapons console found on military aircraft.

The suspension is mind-blowingly amicable for a car capable of lapping the Nürburgring in 7:25 or less.

A stab of the engine start button sparks the powerplant to life. Nestled directly behind the passenger cabin is McLaren's twin-turbocharged 3.8-liter M838T eight-cylinder engine fitted with new pistons, cylinder heads, exhaust valves and revised cam timing for duty in the 650S. The result is 641 horsepower and 500 pound-feet of torque (the discontinued 12C was rated at 616 horsepower and 443 pound-feet of torque).

Despite having enough power to obtain low Earth orbit, the 650S exhibits puppy dog mannerisms at low speeds around town, thanks to the standard seven-speed dual-clutch gearbox, which runs optimized McLaren-developed clutch control software this year. Lightly pressing on the accelerator allows the blue supercar to crawl through the pickup line at the elementary school, and dodge the kids errantly pulling backpacks through the cars, without bucking or odd mechanical rattles – it works splendidly.

The same can be said about the McLaren's suspension, which is mind-blowingly amicable for a car capable of lapping the Nürburgring in 7:25 or less. The 650S' independent suspension lacks traditional mechanical anti-roll bars, which couple the wheels on an axle and are often a source of harshness on rough pavement. Instead, the vehicle rides on McLaren's Proactive Chassis Control (PCC) that uses adaptive dampers (interconnected hydraulically and linked to a gas-filled accumulator) to provide immediate response based on the road surface. Firmness and body roll are controlled electronically, based on three driver-selected suspension settings (Normal, Sport and Track). 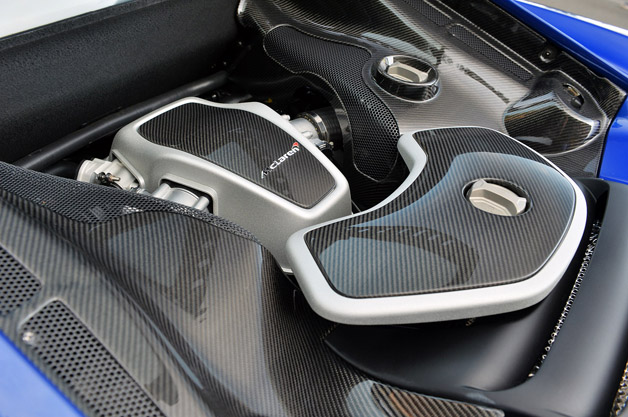 The 650S is an extraordinary canyon carver.

McLaren also allows the operator to choose between three driver-selectable powertrain modes (also called Normal, Sport and Track), which alter throttle response, transmission shift speed (including harshness) and the volume and tone of the exhaust note. The differences between the modes are fairly drastic, with Normal being very docile and Track bordering on harsh. The system garnered no complaints from us – we enjoy electronically controlled settings that oblige big variations between modes.

Even though the exotic McLaren will run grocery and carpool duty with ease, assuming you only have one child to tote and the groceries fit within the small carpeted rectangular trunk in the nose, it is best enjoyed in the mountains, which is where we burned countless gallons of premium unleaded.

With the driver-selectable settings configured to Sport (suspension) and Track (powertrain), the 650S is an extraordinary canyon carver – one of the best, if not the best, that we have ever driven. We were never on a closed racing circuit, fastidiously observing our public road policy is to always stay within the painted strips and to keep all four wheels firmly planted – think slot car. In the purest form of that definition, the McLaren delivers excellence. 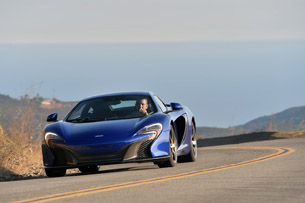 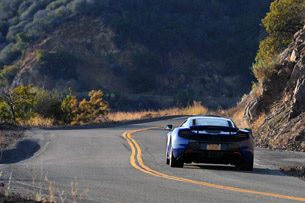 We left it in manual mode about 90 percent of the time, which has to be a personal record.

Mash the lightweight aluminium accelerator pedal to the floor and turbo lag is imperceptible. The forged five-spoke rear wheels, shod with gooey Pirelli PZero Corsa tires (305/30-20 in the back, with slightly smaller 235/35-19 rubber up front) peel out as if coated in wet bleach. Lighten up a bit on the bottom-hinged pedal, to allow them to hook up, and the 3,236-pound coupe blasts forward. McLaren says the car does 0-60 in less than three seconds. Gloriously, it feels every bit that quick in the real world, as the torque builds immediately to force passengers into their seatbacks (we aren't kidding when we said its acceleration makes occupants dizzy).

The ratios within the seven-speed gearbox are optimal, meaning they are well-spaced for the engine's power output. This encourages the driver to take advantage of the wheel-mounted paddle shifters. Unlike its competitors, which present the operator with two individual paddles, McLaren mounts a single alloy rocker 'seesaw' that pivots and allows single-hand up- and downshifts. Reaction time is immediate, making the transmission's operation blissful. We left it in manual mode about 90 percent of the time, which has to be a personal record.

Carbon-ceramic rotors whirling behind multi-piston monobloc calipers are also a new standard fitment compared to the outgoing 12C. While we would prefer a bit firmer brake pedal (there's a very good chance our press car had been abused at the hands of others before it arrived), the heat-resistant braking system never failed to win its battle against inertia (the tires gave up grip before the system conceded stopping power). This is likely a good point to mention the 650S' active aerodynamics, including the big rear-mounted McLaren Airbrake that stands nearly vertical under hard deceleration to slow the chassis and improve stability. 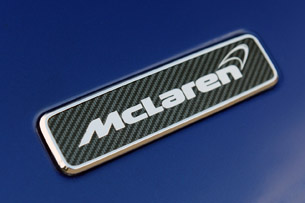 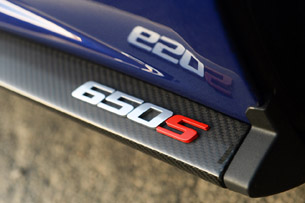 The 650S boasts one of the world's most innovative – and most impressive – active suspension systems.

The 650S boasts one of the world's most innovative – and most impressive – active suspension systems. In its softest mode, the system provides a highway ride to rival a Mercedes-Benz S-Class (and the hushed cabin is conspicuously absent of tire roar, which is unusual in this segment), but in its competitive settings, it brilliantly allows each wheel to follow tiny undulations in the pavement while keeping body roll to a minimum. There is no brake dive – the platform is held remarkably level. Most curiously and impressively, the system does it all without imparting any odd synthetic feel on chassis dynamics. We've never met a better adaptive damper setup.

Proper suspension tuning is expected of a supercar, but strong fuel economy is not. Again rising about the segment's bar, the McLaren coupe earns 16 miles per gallon in the city and 22 mpg highway, translating to deliver nearly 400 miles of range from its 19-gallon tank (the less powerful, and thirstier, Ferrari 458 Italia is rated at 13 city/17 highway). The trip computer said we earned in excess of 22 mpg driving to our photo shoot.

We log copious notes about each car during our test drives. Most are filled nearly equally with good and bad, but not the 650S – it reads like a promotional piece. We liked its "blinding acceleration, impeccable handling, quick throttle response, steering feel, comfortable yet sporty ride, low noise levels, excellent fuel economy, chassis balance and smooth gearbox." Our short gripe list includes only: "initial brake feel, visually bland interior, challenging outward visibility and needs more exhaust note." Also in our notes, amusingly, is that "everyone thinks the 650S is a P1." No kidding. 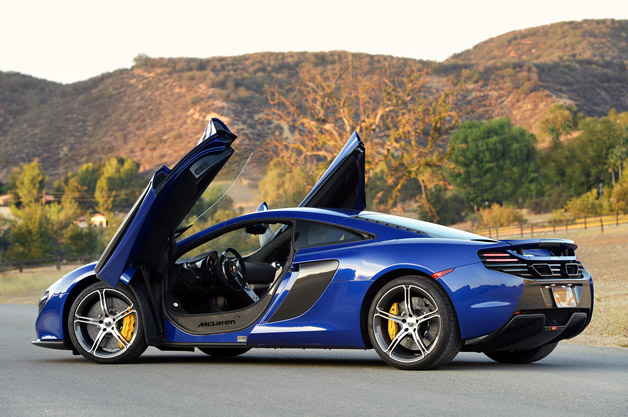 The competition may win the visual and audible awards, but the 650S is an engineering marvel

Without question, the McLaren excels on the road and it exhibits much more competence than the MP4-12C ever did – this is how a successor should be done. Invariably, though, many will argue that it still falls short on emotion. Park it next to a late-model Ferrari or Lamborghini and its aerodynamic bodywork appears mild. The exhaust note from its turbocharged engine is also drowned out by the distinctively intoxicating wail of its adversaries' naturally aspirated V8 and V10 offerings. Those Italians are really, really good.

The competition may win the visual and audible awards, but the 2015 McLaren 650S Coupe is an engineering marvel from a company focused on the mechanics and precision of accelerated driving. Hands down, it is one of the best supercars we have ever driven in terms of comfort and overall driving dynamics.

We can't think of a more enjoyable way to wreak havoc on our otoliths. 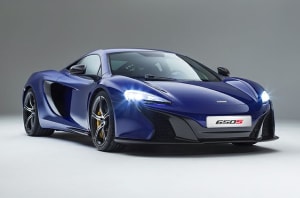