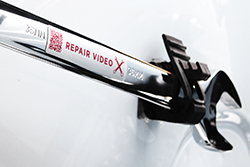 The individualist aspect of motorcycle culture is a well-known thing. Bikers pride themselves on being different, whether they're on the back of a Suzuki or a Harley-Davidson. Ural riders are particularly unique.

These Russian bikes are known for being robust, go-anywhere things, and they routinely arrive with sidecars and camouflage paintjobs. The brand's latest limited-edition model, though, does away with the camo'd color scheme and replaces it something a bit... extraterrestrial.

This is the Ural Mir, named in honor of the Shuttle-Mir program, a space-based collaboration between the United States and Russia that saw shuttles visit the orbiting station in a then-unprecedented spirit of cooperation.

In addition to its most obvious change, the Orbital White Metallic paint, the Ural Mir features a solar panel affixed atop the nose of the sidecar. According to Ural, it can serve as a battery tender or as a source of power for accessories. It can also be simply removed and replaced with a luggage rack, should you need more space (or if it's cloudy). High-intensity LEDs adorn the nose of the sidecar for peering into the pitch-black abyss.

The other cool feature of the Ural Mir is its special instruction system. A QR code has been fitted on a large wrench, and when accessed, it provides "when all else fails" instructions including a, um, clip from the disaster flick Armageddon. So yes, if your Ural breaks down, it seems the manufacturer advocates you beating it with a wrench to get it running again. Your results may vary.

The Ural Mir starts at $16,999 and will be limited to just 20 units and arrives at dealers in November. Take a look below at the press release from Ural Motorcycles and then head over and check out Ural's special instructions.
Show full PR text
ALL SYSTEMS ARE "GO"

Each year we take inspiration from the world around us to create our limited edition series. We explore the places that are far beyond the reach of any ordinary motorcycle, we come up with the cleverest equipment to help you conquer the unknown and we throw in a little something to raise your neighbor's brows. ;-)

This year we are taking you to the outer space – the place where 20 years ago a joint Russian-American space mission Shuttle-Mir began an era of unprecedented cooperation and explorations. No wonder we felt a little nostalgic about that spirit of friendship and bridging the differences. We thought what better namesake for our 2014 Limited Edition and thus we bring you Ural MIR!

MIR comes in a brilliant orbital white with fine metal flake and finished with blue pearl clear. The result is a glowing white Ural with hues of blue that shift with the light - a perfect paint job for your intergalactic mission.

A solar panel serves as a battery tender and accessories power source.

If your mission requires more storage capacity, the panel can be swapped with the included sidecar nose luggage rack.

To defeat the darkness of space we've fitted the sidecar with dual high-intensity LED lights...

...and a custom tonneau cover that uses reflective insulation and can be used as a rescue thermal blanket.

In order to reduce rider fatigue due to wind pressure and turbulence, we equipped the MIR with windshields for the rider and the sidecar co-pilot..

The next comes the wrench. Travel in deep space is filled with the unknown, so we've secured an emergency repair wrench onboard, complete with an embedded QR code for very special "when all else fails" emergency repair instructions.

2014 LE Ural "МИР" - the only motorcycle that comes with the solar panel, the wrench and the Lev Andropov's problem solving method.