Refreshed To Sell Confidence And Value, Not Innovation And Technology View All Specs
Advertising firms have done an admirable job convincing consumers that the easiest way to find a best-in-segment car or truck is by looking at a few key metrics. In the most elementary terms, the vehicle with the highest horsepower, most gears in its transmission housing, lowest acceleration times and best fuel economy most certainly must be the class benchmark.

Yet as the commercials and billboards continue to drive that deceitful message, Toyota is betting shoppers in the subcompact segment are a bit more discerning. The Japanese automaker has just launched its updated 2015 Yaris, a three- and five-door offering that bucks the innovation and performance trends by offering what Toyota feels that entry-level buyers actually desire – reliability, practicality and a low sticker price.

It's sweltering in the tropical Hawaiian sun as I check out the deeply refreshed 2015 Yaris SE. This five-door hatchback, a range-topping version of the company's subcompact "sporty hatch" (Toyota's words, not mine), builds on the new-in-2012 generation by wearing new front and rear fascias, redesigned headlights and some attractive new wheels for the upcoming model year.

Overall, I like what I see. The front clip, with new LED daytime running lights, projector-beam headlight lenses and an oversized piano-black grille adds some character and aggression to a formerly nondescript vehicle. The wheel designs are big improvement, too, as their twisted spokes suggest motion even when standing still. The rear treatment, basically a new urethane bumper cap and redesigned taillamps, isn't as exciting as the front, almost appearing less sporty overall with the deletion of the chrome exhaust outlet, but it ties the package together. (It's interesting to note that the reverse lights have been moved from the taillamp cluster to a single unit at the bottom center of the bumper – one would think its much lower height would be less effective in terms of overall illumination.) 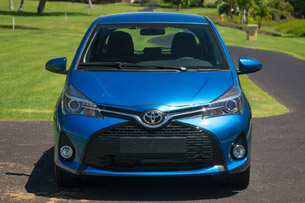 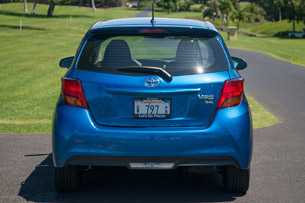 Subjective exterior review complete, I open the door and drop into the air-conditioned cabin where I am blasted with volumes of frigid air – thankfully, the A/C system rocks. In addition to the exterior styling tweaks, Toyota has also enhanced the Yaris' interior. Most notable are the subtle new metallic and chrome accents along the dash and around several of the controls, which visually break up the expansive areas of plastic. The dash has been slightly resculpted, with a new lower storage tray, and it is now formed from soft-touch material. The gauges on my SE model are also new, with crisp white characters on a black background and orange needles to replace last year's all-orange over black theme. A new standard Pioneer 6.1-inch full-color touchscreen adds some sophistication to the dashboard, and it can be paired with an optional navigation plug-in.

This year, Toyota will offer its Yaris in three different trims: L, LE and SE. The L models are easy to spot thanks to their 15-inch steel wheels and plastic hubcaps. Upgraded LE models arrive with 15-inch alloys, while the SE models have 16-inch painted and machine-finished alloy wheels. Power windows, locks and the aforementioned infotainment system (with the automaker's Entune interface), is standard across the board. Cruise control, a multifunction steering wheel with tilt adjustment, remote entry and more is added on the LE model, while the range-topping SE adds sport-trimmed upholstery, leather-wrapped steering wheel, enhanced instrumentation and some other goodies.

A glance at the pricing sheet reveals that an entry-level Yaris L with a manual gearbox starts at $14,845 (plus $825 destination), but my range-topping SE, a five-door hatchback in Blue Streak Metallic with an automatic transmission, commands $18,455 – about a 20-percent premium. I'd argue the upgrades are worth the cost. 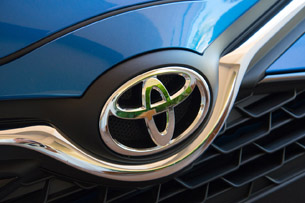 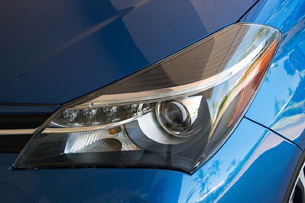 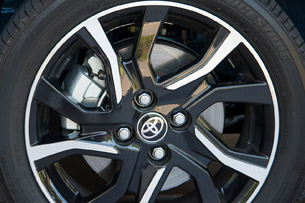 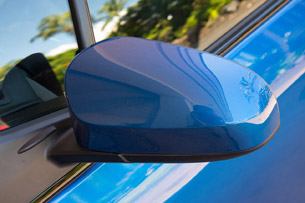 Adding an adult front passenger turns the cabin from "roomy" to "intimate."

The six-way adjustable driver's seat is supportive, and it effortlessly accommodates my six-foot, two-inch frame. There is plenty of head, leg and shoulder room when driving solo, but I would prefer the tilt-only steering wheel to telescope a few inches rearward to maximize arm comfort. Adding an adult front passenger turns the cabin from "roomy" to "intimate," as there is only about five inches separating shoulders, but on the plus side, having a conversation with someone next to you is effortless.

Out of curiosity, I climb into the rear seats of the five-door. The back row provides adequate headroom, but I needed to slide the driver's seat up an inch to make room for my knees. Dropping the standard 60/40 split rear seats will also require the front seats to be bumped forward on their rails to make room for the head restraints as they fold forward (the latter can also be removed). A rear cargo cover, required to keep precious valuables away from mischievous eyes, is now standard.

With a twist of the key, the engine comes to life and settles to a busy idle. Lift the hood on a Yaris to find a standard 1.5-liter four-cylinder engine mounted transversely in the engine bay. The all-aluminum, 1NZ-FE powerplant is yestertech stuff – it's been serving Toyota customers for more than a decade, but at least it's done so faithfully and reliably. In 2015 Yaris guise, the engine is rated at 106 horsepower and 103 pound-feet of torque on regular unleaded gasoline. Power is sent to the front wheels through either a five-speed manual or an optional four-speed automatic transmission.

My preferred gearbox choice is Toyota's four-speed automatic – I'm as surprised as you are.

I was unimpressed with the standard five-speed manual gearbox, which feels like a throwback to the mid-90s. Its clutch is light and its engagement point is awkward, sitting at the very top of the clutch pedal's travel, just before it is fully released. An excessive amount of engine rpm is thus required to launch from a standstill, as the engine doesn't have enough torque, power or mass (or all three) to keep itself from stalling under load at idle. Unfortunately, the Yaris is not equipped with a hill-hold feature, which can assist the driver and reduce clutch wear. On a positive note, however, the cable-actuated handbrake works well in a pinch. The manual's only upside is that is delivers slightly better acceleration, completing the 0-60 sprint in about 9.5 seconds, and slightly better fuel economy on the open road, earning an EPA rating of 30 miles per gallon city and 37 mpg highway.

My preferred gearbox choice is Toyota's four-speed automatic – I'm as surprised as you are. This archaic transmission at least boasts surprisingly well-chosen gear ratios, relatively smooth gear changes, and its shift mapping allows it to run all the way to the 6,500-rpm redline when pushed aggressively. With the automatic, there is no need to worry about clutch wear, and fuel economy around town is identical (the EPA's highway figure drops a digit to 30 city/36 highway). Those positive attributes likely explain why the slushbox has a 90-percent take rate, according to Toyota.

The automatic isn't going to accelerate the Yaris to 60 mph much quicker than 10 seconds, but it has enough get-up-and-go to pull into moving traffic without panic and it can pass slow-moving vehicles when presented with a very long passing lane (yes, I successfully accomplished both). The car is light, only 2,335 pounds with the automatic, but it could still use another 25 horsepower – that sort of infusion could make this subcompact somewhat entertaining. 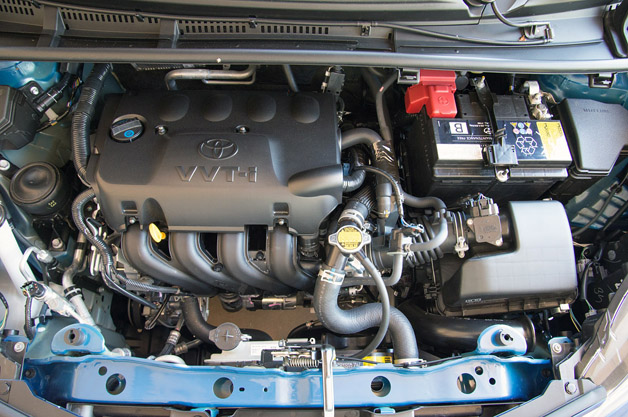 Another 25 horsepower could make this subcompact somewhat entertaining.

Cruising around the Big Island in the updated Yaris was pleasant, with none of the roads presenting anything in the way of a challenge to the five-passenger car. Another improvement to the 2015 Yaris is additional spot welds during manufacturing of the steel unibody structure, which means the robots at the factory are doing a bit more work on each chassis. The result is a stiffer platform, and that required retuning the suspension. Toyota says the new settings are slightly softer, yet more resistant to body roll – exactly what most everyday drivers prefer.

Pushing the Yaris around some of the island's bends demonstrated its competence, but not supremacy. The independent front MacPherson strut and torsion-beam rear suspension do everything they are designed to do, and the subcompact feels stable, easy to control and surprisingly well balanced. Ultimate cornering grip is limited by a combination of the SE model's 195/50VR16 contact patch (L and LE models wear 175/65HR15 rubber) and soft underpinnings. Added up, they result in predictable understeer – nobody will be autocrossing a Yaris in stock form, but plenty will consider its handling mildly entertaining during their commute (city dwellers take note: those bigger 16-inch wheels add nearly five feet to the Yaris' turning radius).

Toyota has added aero fins/vortex generators to the exterior mirrors and beneath the lower front valance. The role of these small torpedo-shaped speed bumps is to improve airflow around the vehicle's sides and underside to augment high-speed stability. I have no idea if they work or not, as I never exceeded about 70 mph on the leisurely island, but I do know that the Yaris was very stable on the highway, even when the big rigs passed in opposite directions on tight on two-lane roads. 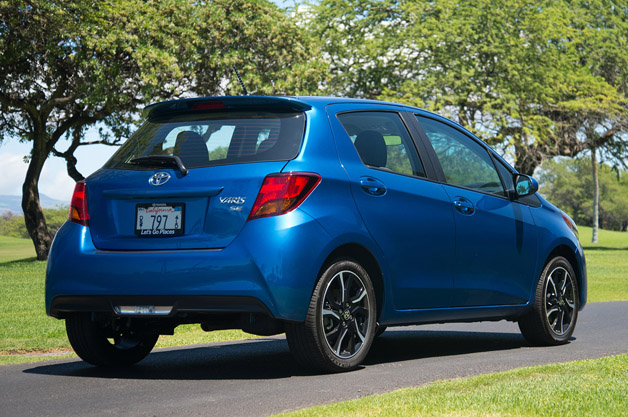 An afternoon tooling around in the latest version of Toyota's subcompact on Hawaii's newest island (the Big Island is only about 300,000 years old, and still growing) is a good day in anyone's diary – the vehicle revealed no major flaws that would keep me from recommending it to someone looking for basic workaday transportation. I most like its packaging, with room for five passengers and a wide, easy-to-load 15.6 cubic feet of cargo area left for luggage. On the other hand, I'd prefer a bit more torque from the four-cylinder, especially at the low end of the tachometer.

The refreshed 2015 Toyota Yaris breaks absolutely zero new ground in terms of innovation, and it is not the enthusiast's choice in the segment, by any stretch of the imagination. It does not boast best-in-class horsepower, the most gears in its transmission, quickest acceleration or highest fuel economy. Instead, it entices educated shoppers who value an attractive sticker price, low cost of ownership and time-proven reliability. The Yaris is not the most exciting or best-driving vehicle in the subcompact segment, but its quantifiable strengths appear to make it the most trusted choice – a much-respected position that appears to sit just fine with Toyota.