The Cars Changed Lives, But Publicity Stunt Couldn't Save Pontiac

Oprah kicked off her 19th season in dramatic fashion by giving all 276 members of the studio audience a free car.

Molly Vielweber's Pontiac G6 appears unremarkable at first glance. It wears forest green paint, rolls on five-spoke aluminum wheels, and it has a sizeable scrape in the driver's side door, the scar of a decade's worth of hard use. You wouldn't notice it parked at a big box store or cruising on the highway. Pontiac made hundreds of thousands of G6s in the 2000s, and a lot are still on the road. It's unremarkable in every way except for the front license plate, which reads, "Oprah 6."

But this is not just any G6. This car is a part of television history.

Vielweber won her G6 10 years ago at a taping of The Oprah Winfrey Show, when Oprah kicked off her 19th season in dramatic fashion by giving all 276 members of the studio audience a free car. It was an unprecedented stunt that changed lives, generated controversy and ultimately failed to provide enough of a marketing lift for Pontiac, which would be shuttered just over five years later.

September 13 marks the 10-year anniversary of the memorable event, which caught everyone, including audience members, by surprise. In a masterful display of showmanship, Oprah dialed up the suspense to match the enormity – and cost – of the event. First she gave away 11 cars, which would have been a landmark TV promotion by itself. But then she coyly announced: "I've got a little twist."
Models circulated throughout the audience carrying silver platters loaded with white boxes wrapped in red ribbon. One contained a set of keys, Oprah implied, for another audience member to win the final car. "Do not open it. Do not shake it," she commanded the crowd. Finally, with the suspense built to a fevered pitch, everyone opened their box. They all had keys.

Everybody did get a car. But not everyone kept it.

William Toebe attended the show with his wife, Jillaine, and he immediately thought of the tax implications, which stretched to $6,000 or more for some audience members. It was a tough reality for many in the audience that day, some of which had been selected based on their need for a new car.


The tax implications stretched to $6,000 or more for some audience members.

"That responsible part of me stepped forward and wondered 'where am I going to get the money to pay the taxes?'" he recalled. Two people meant two cars – and taxes to the tune of more than $12,000. The couple took the cars, then turned around and sold them immediately, paying the required taxes and using the rest to pay off bills.

The Toebes came to exemplify the other side of the Oprah show stunt. Yes, many people got free cars, but the cars weren't really free. Additionally, the cars on the show weren't the actual cars the audience won. After the taping, members went home and took delivery of their G6s through their local Pontiac dealer.

Conversely, some audience members, like Vielweber, took the view that they were receiving a new car, which stickered for about $28,000, for just $6,000.

"Everybody that wins something pays taxes," she said.

Cynthia Meyers, an associate communications professor at the College of Mount Saint Vincent in Riverdale, NY, and author of A Word From Our Sponsor, said the promotion produced mixed results. 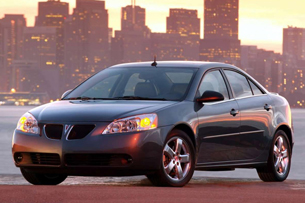 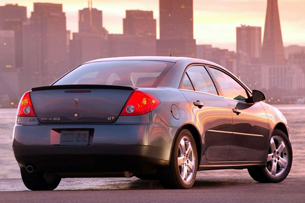 "Oprah had reached a pinnacle of popularity when she did the Pontiac integration – she probably hoped to transcend any criticism that she was 'selling out' by also appearing to be beneficent to her audience," she wrote in an email to Autoblog. "I would guess the value of the publicity to Pontiac far outweighed the cost of the cars. However, the cost to the beneficiaries [in taxes and public envy] might have been higher than expected."


"I would guess the value of the publicity to Pontiac far outweighed the cost of the cars." – Cynthia Meyers

For Pontiac, the guest appearance on the Oprah show did indeed raise its profile, and the episode showcased the G6 in a better light than even paid-for advertisements. It wasn't cheap for General Motors, though, as the total sticker prices of the cars came to about $7.7 million. Ultimately, it wasn't enough to prop up the G6, which earned mediocre reviews and sales. The G6 was a front-wheel drive car offered in sedan, coupe and convertible variants, and it replaced the long-running Grand Am in Pontiac's lineup, though it was never competitive enough to steal buyers from Toyota and Honda. More recently, it was in the news as part of GM's massive recalls earlier this year. All 2005 G6s and some 2006, 2008 and 2009 models were recalled for faulty electric power steering systems that could fail without warning.

Promoting the car on the show was viewed as a questionable, even desperate move for GM's marketing department, which was willing to spend big money to get Pontiac on Oprah's big stage, though her largely female audience wasn't the target market for most of the brand's cars.

Still, 10 years ago, GM still had hopes for Pontiac, and the G6.

"At the time it was kind of a novel approach, which is why it caught people's attention," said Mary Henige, who was Pontiac's communications director at the time.

After its initial boost from the Oprah show, Pontiac struggled for the rest of its life, producing some memorable cars – like the G8 sports sedan and Solstice roadster – but never enough to achieve commercial success or forge an identity. In 2004, Pontiac sold 474,179 vehicles, essentially flat from '03. By 2009, it would only sell 178,300. When GM began eliminating brands in the run-up to its historic bankruptcy, Pontiac was one of the first to be chopped. After 84 years, the brand was closed for good in 2010. 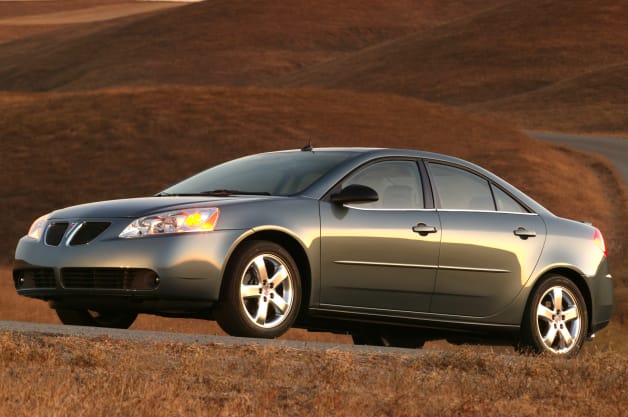 Other companies tried to copy the promotion, most notably Volkswagen, which repeated the stunt almost identically on another episode of Oprah in November 2010. Smartly, VW also paid the taxes for audience members, which eliminated much of the controversy. But unlike Pontiac, which had some G6s on hand and was able to show video of winners screaming and jumping into the cars to celebrate, Volkswagen choose to give away 275 copies of the 2012 Beetle, which wouldn't be shown publicly until the following April. The car was only depicted as a silhouette at the taping, which was a major letdown compared to the Pontiac G6 near-hysteria.


The giveaway and the cars provided everlasting memories, even for audience members like the Toebes, who sold their G6s right away.

Promotional giveaways have been around since the early days of radio and transitioned into television as the medium surged in popularity in the 1950s. Their popularity has ebbed and flowed, though Meyers noted they could be poised for a comeback as TV audiences are increasingly fragmented. She doesn't, however, expect to see a resurgence of car giveaways.

"The value of a big stunt is limited because of its rarity: too many big giveaways and audiences may stop paying attention," she said. "The mixed results for all concerned, including Oprah, may have discouraged other carmakers from replicating this stunt."

But for those who benefited from them, the giveaway and the cars provided everlasting memories, even for audience members like the Toebes, who sold their G6s right away.

Though he says he was miscast as a voice of dissent in the media, William Toebe received a lot of publicity. He and his wife appeared on The Daily Show with Jon Stewart in 2004, and it all ended up bringing attention to a charitable project they were working on at the time to benefit ALS.

In fact, they were happy to get the cars, but even without the tax implications, the G6s weren't suitable transportation for them. They live in rural Wisconsin, and the closest population center is a small city called Algoma nestled near Lake Michigan – which means that it's usually is blasted with harsh winters. As he put it, "If a foot of snow comes in [the region], we're going to get at least two." The G6 wasn't the best car for that kind of weather. 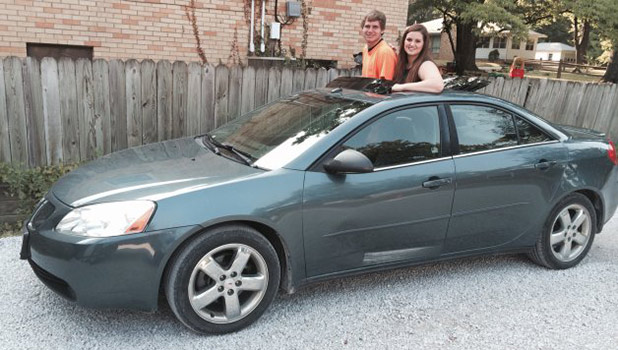 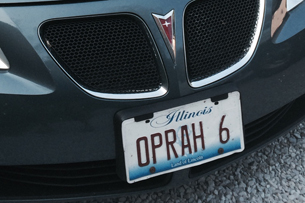 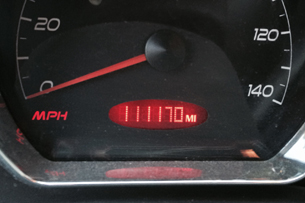 Vielweber's G6 still gets consistent use, in spite of the bumps and bruises it's sustained over its long life.

For Molly Vielweber, her G6 (shown above with son, Camron, and daughter Morgan) is a reminder of a period she called "the best time in her life." She started her own business, and the car was her mode of transportation as her children grew up.

"It's been a great car," Vielweber told Autoblog, her voice still carrying a note of excitement 10 years later. "Probably the only brand-new car I've had in my life."

She was part of a group of four friends who drove to Chicago for a "girls weekend" that included the Oprah show, and she's the only one who still has the G6. Two sold their cars, and one was totaled a few months ago.

Vielweber's G6 still gets consistent use, in spite of the bumps and bruises it's sustained over its long life. It's survived a flood and a multicar pileup, and it's already outlived both Pontiac and the original Oprah Winfrey Show, which went off the air in 2011. She hopes the G6 will get her daughter, Morgan, through college, and then they'll simply see how long it lasts.

"I'm hoping to drive it until we can't drive it any more," she said. 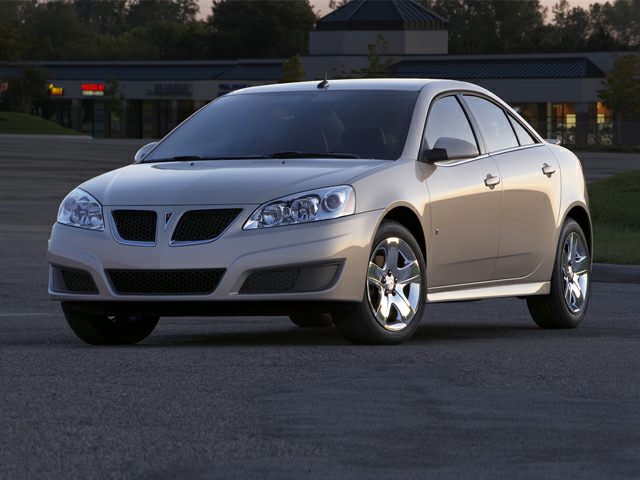