Not Your Typical Italian Exotic

Throw EV enthusiasts into a room with diehard motorcyclists, and prepare to see sparks fly. The perfect storm of oil and water famously struck when electric bikes first competed at the Isle of Man TT, and the conflict continues every time a battery-powered two-wheeler crosses swords with one of its internal combustion ancestors on public roads.

The Energica Ego is a motorcycle that might be among the first vehicles to finally reconcile the two tribes when it populates American roads in April, 2015. Why is this Italian-built electric superbike different than the ones before it, and what does it deliver that domestic brands like Mission Motors (San Francisco, CA), Zero ( Santa Cruz, CA), and Brammo (Ashland, OR) haven't?

For starters, the Ego originates from parent company CRP Group, a Modena-based outfit with a rich history of supplying Formula One teams. With historical ties to supercar production and a longstanding familiarity with rapid prototyping and high tech materials, the company has a reputation for cutting edge design and construction, which lend it a technological leg up on the startup crowd. 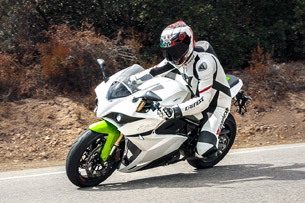 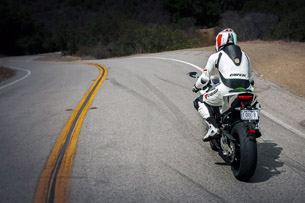 As the bike crawls off the line, a subtle thrum of straight cut gears and EV driveline noise emerges.

Bearing that in mind, there's something undeniably strange about being surrounded by heavy Italian accents at the famed Rock Store, nestled deep in the hills of Malibu. The brick-and-mortar biker hangout usually hosts tympanic membrane-rupturing Hogs and dry clutch-rattling Ducs, but on this particular weekday morning in July, the birds can be heard chirping as a small fleet of Egos quietly charge their batteries off the local power grid.

"My grandfather worked closely with Enzo Ferrari," CRP Chief Operating Officer Livia Cevolini tells me shortly before I swing a leg over Energica's white and acid green steed. More distracting than the casual punctuation of her statement is the shock of her winged Jeremy Scott Adidas sneakers in my peripheral vision, which serve as not-so-subtle reminders that Italians are addicted to flair.

That style factor comes into play the moment you turn the Ego's key, which fires up the dashboard in a garish sequence of colors worthy of Miami Beach on Memorial Day. There's nary a peep from the motor at a standstill, but as the bike crawls off the line, a subtle thrum of straight cut gears and EV driveline noise emerges. The permanent magnet AC motor is managed by a liquid-cooled control unit that monitors throttle position and lean angle, among other variables. At full-tilt, it produces a claimed 136 horsepower and 145 pound-feet of torque, which is fortunate considering its 569-pound curb weight, approximately 175 pounds of which are due to its 400-cell battery and cabling. The bike's mechanical components are held together by an oh-so-Italian tubular trellis steel frame, while key external components on the limited edition Ego 45 model incorporate 3D-printed pieces finished in Formula One-inspired ceramic coating. 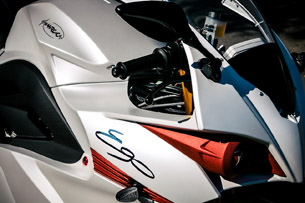 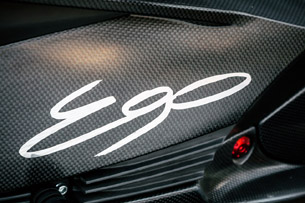 There's a palpable feeling of connectedness between the right grip and the motor.

At terrestrial speeds, the Ego feels eerily attuned to throttle inputs and responds to slight adjustments in wrist angle with well-modulated forward movement. There's a palpable feeling of connectedness between the right grip and the motor, and barely a hint of the power potential that lies beneath. Above 30 miles per hour or so, the bike's momentum helps it feel faster and more willing to accelerate, which in turn draws even more rotational inertia from the motor. The increasingly audible whine of the driveline heightens the sense of drama, and as the digital speedometer creeps further upward - 50, 60, 70 mph - the bike starts to feel lighter and even quicker. In the estimated 3 seconds or so it takes to scoot from zero to 60 mph, the upward rake of the acceleration curve suggests that subsequent speed milestones are encountered in a parabolic, not linear, manner.

Despite the lack of traction control on my test bike (early models will be TC-free), the electronic nannies seem unnecessary because the engine's torque output feels like it's managed so responsibly by the liquid-cooled control unit. While piloting this foreign machine for the first time along the serpentine stretch from the Rock Store to the "Snake" section of Mulholland Highway, a route that's notorious for throwing riders off bikes in spectacular fashion, the Ego manages to stroke mine, encouraging greater lean angles and deeper braking than I would usually reserve for an unfamiliar machine, especially given its aggressive riding position and its stretched-out handlebar layout. 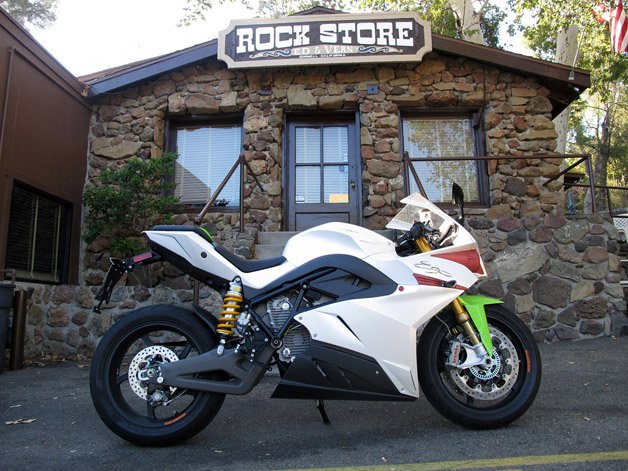 Energica says the Ego will be capable of 100 miles per charge while cruising at a steady 50 mph..

The return ride runs beyond the starting point and along high-speed sweepers that reveal a stable chassis and a willingness to track with steady, confidence-inspiring arcs. Though it lacks the flickability of a traditional middleweight literbike (think Triumph Daytona 675 or Yamaha R1), the Ego's thrust and stability levels make it feel better suited to larger-scale bends than tight, technical stretches. The Brembo monobloc brakes, which do not use regeneration to divert energy back to the battery, lack the initial bite typically associated with high-end stoppers. That might very well change with calibration, since Bosch is still developing the bike's ABS system, which will feature a rear lift mitigation system. The four-way engine braking system that manages the driveline's regenerative charging felt light in all but the highest settings, and an Energica engineer confirmed that the final calibration will move each setting one click higher.

Though our ride wasn't lengthy enough to accurately predict cruising range, Energica says the Ego will be capable of 100 miles per charge while cruising at a steady 50 mph. One spokesman mentioned that after 48 miles of hard riding through Malibu, 30 percent of the charge remained, which equates to an estimated total range of around 69 miles. More impressive than the bike's power-to-range ratio is the fact that a four-phase DC charger can replenish 85 percent of the battery's power in only 30 minutes, suggesting real-world adaptability to the inherent limitations of a battery-powered lifestyle. 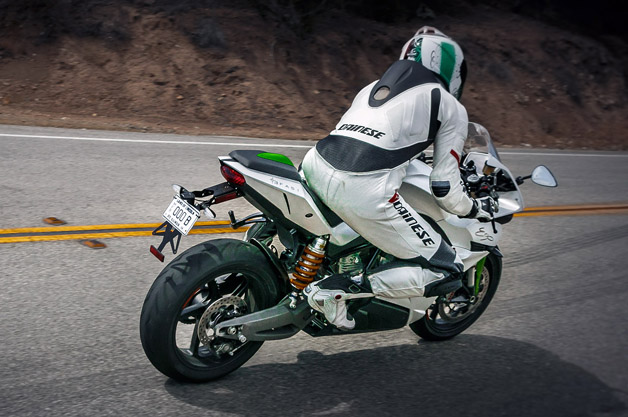 The Energica Ego starts at $34,000, while the limited edition Ego 45 will run a considerably steeper $68,000 and come equipped with carbon fiber body panels and greater suspension adjustability. Judging by price alone, the Ego hardly closes the gap with its gasoline-powered counterparts, especially when a sultry exotic like the Ducati 1199 Panigale can be had for roughly half the price. But what the Ego lacks in the dollar-for-dollar metric, it captures in its future-friendly technology and surprising performance capabilities.

It may not be the magic bullet for electric propulsion we've been hoping for, but as an engineering accomplishment that captures the spirit of what electric bikes can attain, this new kid on the block from Italy represents a future where gas and electric-powered enthusiasts might finally be able to get along.