Thirteen states, the District of Columbia and several US territories have hand-held cellphone bans

Autoblog Staff
Common sense says that talking on a cellphone while driving is not a particularly safe thing to do. But recent studies have found banning cellphone use while behind the wheel is not leading to a decrease in accidents.

The results are somewhat surprising and have left researchers and regulators scratching their heads, especially given that 13 states, the District of Columbia and several US territories have hand-held cellphone bans. Additionally, 44 states specifically outlaw texting while driving, according to the Governors Highway Safety Association.

The most recent study, published this summer in the journal Transportation Research Part A: Policy and Practice, analyzed California's cellphone ban for drivers in 2008. Researchers found the number of accidents only dropped from 66.7 per day to 65.2 per day statewide, a statistically minor decline. The results were mirrored in many of the state's major cities, including San Francisco, though Los Angeles did experience a slight decrease in accidents. Researchers looked at the six-month periods before and after the ban went into place on July 1, 2008.

"We went in there expecting to see something," Daniel Kaffine, one of the study's authors, told Autoblog. "[But] it was pretty clear to us that there was no compelling evidence of a decrease in accidents."

Though offsetting for safety advocates, Kaffine's research is in line with other findings. The Highway Loss Data Institute, the research arm of the Insurance Institute for Highway Safety, studied insurance claims rates in 2009 and 2010 studies, and found no link that bans helped decrease crashes. 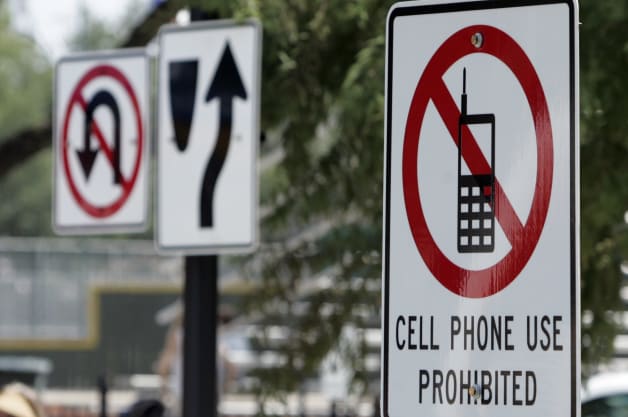 Conversely, California's Office of Traffic Safety said in 2012 that research conducted by the University of California, Berkley, found a 22-percent drop in traffic deaths in the two years after the ban went into effect. Further, deaths resulting from hand-held use of phones was down 47 percent.

While the studies have focused on accident and insurance statistics, the results have spurred wider discussions as to why the roads likely have not gotten safer.

Kaffine, an associate professor of economics at the University of Colorado in Boulder, said it's possible many motorists are simply ignoring cellphone bans while driving. It's also likely hands-free devices, while meeting the letter of the law, are still distracting. And with a fine hanging over their heads, drivers may also be more reluctant to disclose that they were using their cellphones during an accident, Kaffine said.

Another theory is drivers who talk on their cellphones are already easily distracted, and even if they do comply with the law, something else – like the GPS, satellite radio, passengers or even other motorists – is capturing their attention.

Finally, there's the possibility that cellphone use isn't as bad as previously believed. Some reports claim it's as dangerous as drunk driving, which Kaffine is quick to rebuke, noting motorists can simply put down their phones at any time.

"The idea that it's as dangerous as drunk driving is not true," he said. "It's much harder to get undrunk."

Still, most researchers and motorists don't dispute making a call from behind the wheel isn't at least partially distracting. The question then becomes: how to remedy this? Bans on hand-held devices are one way to try, but the research of Kaffine and others suggests it hasn't been an effective tactic.