The cylinder count in BMW's M3 has fluctuated over the years. The original M3 debuted in 1985 packing a 2.3-liter inline-four, but subsequent models went with sixes until the outgoing generation upped the cylinder count to eight. With its latest model, BMW has dropped back to six cylinders with a pair of turbos taking the place of the extra pistons. But the next M3 sedan and M4 coupe could go back to the model line's roots with a four-cylinder engine.

Speaking with BMW M product manager Carsten Pries at the launch of the latest M3 and M4 in Portugal, our Aussie compatriots at Motoring.com.au report that "you could see a future [M3] powered by a four-cylinder engine." Offsetting the reduction in cylinders, the lighter engine would benefit the vehicle's weight and balance, thus enhancing performance.

We wouldn't expect the next M3 and M4 to lose any power in the process, though: Output in the M3 has only risen over the generations, from 192 horsepower in the four-pot original to 282 hp in the six-cylinder E36, 338 hp in the six-cylinder E46, 414 hp in the V8 E90 and 425 ponies in the new turbocharged six-cylinder F80 model. With that latter model having just debuted, it'll likely be a good six or seven years before the next version comes along, giving BMW plenty of time to settle on an engine – however many cylinders and turbochargers it has. In the meantime, you'll have to forgive us for taking a romp down M3 memory lane in the fresh gallery of images above. 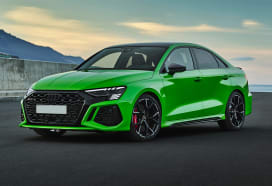