With the introduction of the latest Cadillac CTS, we knew it would only be a matter of time before a new CTS-V would come along. Now General Motors has revealed that the next CTS-V will arrive sometime next year, but before it does, the company is sending off the outgoing coupe with a special edition.

For 2015, the Cadillac CTS-V Coupe will come in a limited edition of 500 units decked out with a dark grille treatment, satin-finish wheels, red brake calipers and an upgraded cabin. The interior is decked out Recaro seats trimmed in black with red stitching, Midnight Sapele wood trim, metal pedals and a microsuede-trimmed steering wheel and shifter.

Buyers will be able to opt for white, gray or optional black exterior paint, an available sunroof and a six-speed transmission in either manual or automatic configuration. Of course, the 6.2-liter supercharged V8 comes standard with 556 horsepower, as does Magnetic Ride Control and brakes by Brembo. Pricing will be announced closer to launch, but in the mean time, you can read all there is to know by checking out the official release below.
Show full PR text
Cadillac Celebrates V-Series with 2015 CTS-V Coupe
Special Edition the last before next-generation models arrive next year
2014-05-12

DETROIT – Cadillac today announced production of a limited, special-edition 2015 CTS-V Coupe, marking the last chapter of the current model before the next generation of the V-Series debuts next year.

The 2015 CTS-V Coupe will consist of 500 limited-edition cars available during the second half of 2014.

The CTS-V Coupe is the most dramatic model in the V-Series range of high-performance luxury models, blending a personal 2+2 layout with a drivetrain vetted on Germany's famed Nürburgring track.

The 500 special-edition CTS-V Coupes will be produced this summer. Full pricing information will be released closer to production. Exterior color options include Crystal White, Black Diamond ($995) and Phantom Gray. Buyers can opt for either a six-speed manual or automatic transmission. A sunroof also is available ($700).

The next-generation V-Series models are in development and will premiere next year.

"The special edition is a stepping stone to the next-generation V-Series, which will move to the next level with more dynamic design and technical sophistication," Ellinghaus said. 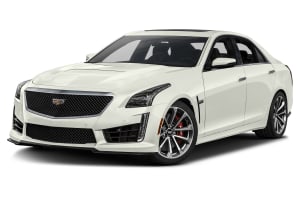