Noah Joseph
General Motors may have made a few mistakes when it came to the whole ignition-switch debacle, and it will likely be dealing with the consequences for some time to come. But you have to hand it to Mary Barra and her team, because they're determined to clean house and avoid the same mistakes. That's why the biggest of the Big Three automakers in Detroit has been issuing recalls left, right and Renaissance Center. Aside from those vehicles fitted with the faulty ignition switches, GM has recalled over 50,000 Cadillac SRXs, another 50 heavy-duty pickups and some 51,000 full-size crossovers. There are bound to be more to come, and now it's issued another 50k-unit recall over faulty shift cables in the transmission.

The recall affects 2007 and 2008 Saturn Auras fitted with the four-speed automatic transmission manufactured between April 24, 2006, and October 31, 2007. The recall doesn't affect models equipped with the six-speed automatic, or for that matter any of the Aura's Epsilon platform-mates like the Chevy Malibu, Pontiac G6, Opel Signum and Vectra, Saab 9-3 or – carrying over from Fiat's aborted partnership with GM – the Fiat Croma, although many of those models used the same 4T40 transmission employed in the Aura.

In the affected vehicles, the shift cable might fracture while in motion, preventing the transmission from shifting into Park or the ignition from switching off, which the National Highway Traffic Safety Administration figures could lead to the car rolling away. Hence the recall of 56,214 units in the United States, owners of which can expect to hear from their dealership in due course to have the necessary components replaced.
Show full PR text
RECALL Subject : Transmission Shift Cable may Fracture/Rollaway
Report Receipt Date: APR 30, 2014
NHTSA Campaign Number: 14V224000
Component(s):
Potential Number of Units Affected: 56,214
Manufacturer: General Motors LLC

REMEDY:
GM will notify owners, and GM dealers will replace the shift cable assembly and mounting bracket, free of charge. The manufacturer has not yet provided a notification schedule. Owners may contact General Motors at 1-800-553-6000. GM's number for this recall is 14152. 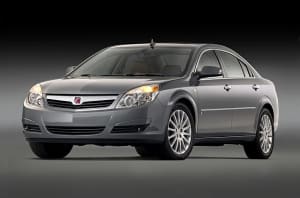