eBay Find of the Day: 1981 Porsche 928 convertible by Carelli

The Porsche 928 was perhaps the consummate European GT of its day. With a powerful front-mounted V8 engine that grew in displacement as the model years went on, it was capable of eating up the miles at triple-digit speeds in great comfort for occupants. It was also an unusual beauty, with its sharp front and curved rear featuring innovative integrated bumpers.

Currently for auction on eBay Motors is one of the rarest 928s you're likely to find, in a handsome combination of Guards Red paint and tan leather interior, though we wouldn't mind a less-showy finish to the factory wheels. According to the seller, this car is one of eight 928 convertibles by Carelli Design, a firm that's still in business. 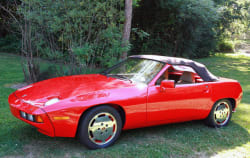 The auction claims that these cars were made in 1981 as a feasibility study between Carelli and Porsche for a possible production 928 convertible. The seller says he worked at the dealership where the car is said to have been originally sold $103,000. To remove the roof and hide the convertible top, there were significant changes made to the body and interior, including redesigned doors and a completely new trunk. As you can see in the gallery, when down, the top is completely hidden in a very factory-like fashion. When up, it looks slightly awkward, though (and we'd really like to see a rear three-quarter view to check out the blind spots).

The car is mechanically stock, with a 4.5-liter V8 and an automatic transmission that sends power to the rear wheels. Over the years, an aftermarket muffler, exhaust tip and switch to control the antenna have been installed. The seller claims there are just 6,333 miles on this rare Porsche convertible.

As of this writing, the auction sits at $25,100 with 2 bids and the reserve not met. The seller touts that the car comes with a certificate of authenticity from Porsche and a Motor Trend article about the Carelli-prepared 928s.