Subaru's long and distinguished history in the world of rallying is about to get another chapter, as it's set to field a team in the Global RallyCross Championship. The car? The all-new WRX STI.

Yes, Subaru will be fielding a GRC challenger, with drivers Bucky Lasek and Sverre Isachsen at the helm. This particular car was teased earlier this week, and is a preview of the eventual GRC model which will launch this fall. The race-ready STI boasts a custom widebody kit with a carbon-fiber rear wing. The roof scoop and the mirrors are also made of carbon fiber, while the wheels are provided by Method. As with all GRC contenders this year, the WRX STI is shod in Yokohama spec rubber. It's not clear what sort of engine sits under the scooped hood, although we imagine we'll find out before the season kicks off in a few months.

Perhaps even more exciting is word that Subaru will also prepare a version of the WRX STI for stage rallies, with Travis Pastrana and David Higgins fielding the new car in the Rally America Championship. That car should arrive later this year.

Take a look up top for our live images of the new rally car, and then head into Comments and let us know if you think Subaru's decision to run GRC and RAC could eventually lead to a return performance in top-flight World Rally Championship series. Scroll down for the brief press release from Subaru Rally Team USA.
Show full PR text
Subaru Rally Team USA Teases Fans with 2015 WRX STI in Rallycross Spec

Subaru of America offered a peek into their racing future with a Rallycross-spec 2015 WRX STI today at the New York International Auto Show. This STI was a joint project with Subaru Rally Team USA, RedBull Global Rallycross, and NBC to promote the 2014 RedBull GRC season that begins May 18. The STI Rallycross car features a custom widebody, a carbon fiber modified STI spoiler, rally car-style roof scoop and mirrors, along with Method Race Wheels mounted with RedBull GRC's new Yokohama spec race tire. Vermont SportsCar, home of Subaru Rally Team USA, prepared the STI. The full-race version will be in the hands of team drivers Bucky Lasek and Sverre Isachsen this fall. Travis Pastrana and David Higgins, who compete for Subaru Rally Team USA in the Rally America Championship, are expected to get a stage rally version of the 2015 WRX STI later this year as well. 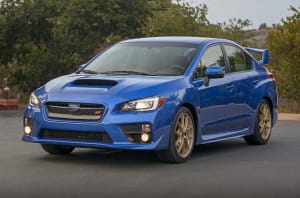