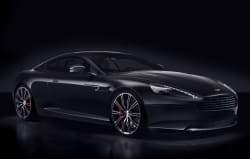 Aston Martin has never been touted for the affordability of its cars, but with its new V8 Vantage GT, it's at least taking a stab at the concept. Priced at $99,900, the company probably feels like it's giving them away.

Aston Martin says its Vantage GT is inspired by its long history in motorsports. Available as either a coupe or convertible (at extra cost), the GT packs the automaker's 4.7-liter V8 pumping out 430 horsepower and 361 pound-feet of torque capable of getting it to 60 miles per hour in 4.6 seconds and to a top speed of 190 miles per hour. Buyers can choose between either a seven-speed automated manual with magnesium paddle shifters or a traditional six-speed manual.

Despite the stripped-down price, buyers aren't going to be missing many amenities in the GT. It comes standard with graphite-painted alloy wheels and black trim around the headlights side windows, exhausts and taillights. An optional graphics pack recalls Aston Martin's 24 Hours of Le Mans success with contrasting colors on the grille, mirror caps, rear diffuser and – on coupes – the A-pillar. The interior gets carbon-fiber sill plates, Alcantara door panels and sport seats from the V12 Vantage S. North American sales begin in the third quarter.

The other new Aston slated for reveal at this week's New York Auto Show is the DB9 Carbon Edition, which is aimed at carbon fiber lovers. It adds loads of the stuff inside and out in a traditional mix of luxury and high performance. It begins as a standard DB9 with a 6.0-liter V12 rated at 510 hp and 457 lb-ft and a six-speed automatic transmission. The big engine cruises to 60 mph in 4.6 seconds and to a top speed of 183 mph.

The Carbon Edition is actually separated into two different editions. Carbon Black models come in Carbon Black II exterior paint, and Carbon White models use Stratus White. Both come with a wide variety of carbon trim, including on the side strakes and taillight trim, with a black mesh grille and window trim accentuating the look. Buyers can also add an optional carbon fiber front splitter rear diffuser and mirror caps. Prices start at $199,995 and deliveries begin in the third quarter. Scroll down to get all of the details on the new Astons, and to see a Bloomberg video with Julian Jenkins, Aston Martin's president of the Americas, talking up his company's new entry-level baby.

 Both cars will make international debuts at 2014 NYIAS

The great British sports car marque, now in its 101st year, is debuting a bold addition to its iconic V8 Vantage range as well as dramatic new special edition variants of the timeless DB9, underlining the company's ability to create cars that sit apart from the mainstream.

Making the Aston Martin brand more accessible to sports car enthusiasts than ever before, the bold new 2015 Vantage GT combines race-honed dynamics and looks with a new sub- $100,000 price entry point and comes in Coupe or Roadster form, each offered with either six- speed manual or seven-speed Sportshift II automated manual transmission – both delivering 430bhp and a top speed of 190mph.

Pure, unadulterated fun is what lies at the heart of the new V8 Vantage GT. Honed on the track to excel on the road, Vantage GT – available in Coupe or Roadster form – delivers a power hike to 430bhp at 7,300rpm. This means a top speed of 190mph and a reduced 0-60mph time of 4.6 seconds.

The increased power and torque are achieved through a valved air intake system and an aggressive spark strategy. The air intake system valve opens at engine speeds above 3,500rpm to allow greater air flow into the engine which in turn helps increase power and optimise performance feel. Meanwhile the aggressive spark method uses sophisticated electronics to ignite the fuel in the engine at precisely the right time allowing the engine to run at its most powerful. It can also recognise higher octane fuel and extract the optimum performance from the increased rating.

Designed with the purist in mind, that power feeds the rear wheels through a sporty six-speed manual gearbox as standard equipment; with the option of a close-ratio seven-speed SportshiftTM II automated manual transmission with short final-drive ratio for those seeking to capture the motorsport thrill.

The new Vantage GT brings together the best of the V8 Vantage's performance and dynamics to deliver race-winning responses. A front mid-mounted, 4.7-litre, all-alloy, quad overhead cam, dry-sumped V8 engine is complemented by a rousing sports exhaust, aerodynamics honed through numerous wins in GT racing and a competition-derived braking system.

The compact proportions and inherent balance of the Vantage design are supported by a carefully calibrated sports suspension tune and quick-ratio steering rack that rewards the true enthusiast driver on road, and on track.

Styled to evoke thoughts of the track, Vantage GT celebrates Aston Martin's sporting heritage and motorsport success, drawing direct inspiration from the Vantage GT4 race car which will be seen in competition across North America during the 2014 season.

Priced from $99,900 RRP, first deliveries of the new Vantage GT will begin in quarter three to North American customers.

The Aston Martin DB9 family grows at New York with the arrival of the Carbon Edition.

Style and visual drama are the special editions hallmarks as they perfectly emphasise the timeless GT's sporting nature. The DB9 Carbon Edition is led by two distinctive specifications; Carbon Black and Carbon White or alternatively customers are afforded the choice of the Aston Martin colour palette to personalise their own carbon creation.

Inside, a strong black styling theme with a choice of accent colours in line with the caliper shade showcases carbon fibre details and new black hardware. Bespoke sill plaques with the Carbon logo, communicate the cars' rarity, too.

Of course the styling changes don't alter the DB9's inherent grand touring capabilities, qualities that make it the world's most admired and desired GT.

Today's DB9 features the modern AM11 V12 engine which uses 'Gen4' VH architecture and hardware, tuned to suit the character of a classic GT. The result is an engine with effortless torque of up to 457 lb ft and peak power of 510bhp.

The 2014 New York International Auto Show opens to the public on Friday 18 April at the Jacob Javits Convention Center, running until Sunday 27 April.