If you're looking for all the style of a sports sedan but without the added expense of springing for a full-on performance model (and keeping it fed with fuel and fresh tires), most European automakers will gladly hook you up with an all-show, no-go package. BMW has its M-Sport aero kits, Audi its S-Line, and Mercedes its AMG Sport packs. And now Jaguar is getting in on the action with the launch of the new R-Sport line.

Set to be introduced on the XF at the Geneva Motor Show, the R-Sport trim at least some of the flash of the XFR or XFR-S but with a more economical engine and a relatively accessible price of entry. (This is, after all, still a Jag.) The XF R-Sport is distinguished by a sportier front bumper, side sills, rear spoiler, 17-inch wheels and unique badging to set it apart from any "ordinary" Jaguar XF. The interior is upgraded as well, and there's an optional black styling pack to take things even further.

Jaguar is offering the XF R-Sport in either sedan or wagon form with the 2.2-liter turbodiesel producing 161 horsepower and 295 pound-feet of torque, fitted with a spot-start system to make it a far more frugal option than the 5.0-liter supercharged V8 in the real deal. Although this version won't be coming to US as you see it here, Jaguar tells Autoblog it's always possible it'll produce a similar aesthetic treatment for the North American market – just don't count on such models arriving under diesel motivation. We'll take a closer look at them in Geneva next week, but for now, you can check out the gallery and press release below for an idea of what to expect.
Show full PR text
JAGUAR XF R-SPORT: LUXURY, PERFORMANCE AND PRACTICALITY COMBINED WITH HIGH EFFICIENCY AND ULTRA LOW EMISSIONS

- The new Jaguar XF R-Sport adds real-world efficiency and a raft of exterior enhancements to the XF range without compromising on the luxury, performance and refinement expected of a Jaguar saloon

- Available in Saloon and Sportbrake guise, the Jaguar XF R-Sport is the first Jaguar to adopt the company's new R-Sport branding and is available with Jaguar's four-cylinder, 2.2-litre diesel 163PS engine, making the R-Sport capable of achieving 57.7mpg with a CO2 figure of just 129g/km

- The XF R-Sport is offered with an Intelligent Stop-Start system that uses a Twin Solenoid Starter (TSS) to shut down the engine when the car comes to a halt, helping to reduce emissions and improve fuel consumption

- The R-Sport model features unique badging for the side power vent, steering wheel and new R-Sport branded tread plates, while adopting the XF Sport front bumper, 'R' style side sills and a unique rear spoiler give the car an assertive appearance on the road

"The XF R-Sport opens up the unique Jaguar ownership experience to a whole new group of customers. Business users and fleet managers will be able to enjoy the seductive design from the high performance 'R' models, while benefiting from the low emissions and high fuel efficiency of the powertrain. In short, Intelligent Performance taken to the next level."
Steven De Ploey, Jaguar Global Brand Director

The first Jaguars to wear the new R-Sport badge, the XF R-Sport Saloon and Sportbrake represent a compelling combination of elegance and real-world efficiency, helping to reduce the tax burdens on drivers and fleet managers alike while still retaining the luxury and refinement already associated with the XF range. The 2.2-litre four-cylinder engine is offered in combination with Jaguar's Intelligent Stop-Start system and an eight-speed gearbox, enabling the XF R-Sport to deliver the performance and driver appeal expected of a Jaguar along with reduced emissions and greatly improved fuel consumption. A range of exterior and interior enhancements lend the car an assertive appearance on the road and a sporty, cosseting feel within the cabin.

Jaguar's four-cylinder, 2.2-litre diesel 163PS engine, which works in combination with an eight-speed automatic transmission, has new larger Exhaust Gas Recirculation valves and a revised cooling assembly which combine to reduce emissions figures by a further 6g/km of CO2 over the 2013 Jaguar XF. The R-Sport is capable of achieving 57.7mpg with a CO2 figure of just 129g/km. An appealing proposition to company car drivers and fleet managers, the XF R-Sport represents all the benefits of driving a Jaguar along with greater fuel economy and reduced emissions.

The XF R-Sport's low emissions figures are helped further by Jaguar's Stop-Start system, which uses a Twin Solenoid Starter (TSS) to shut down the engine when the car comes to a halt and restarting it in less time than it takes for the driver's foot to move from the brake to the accelerator. The system also offers 'change of mind' functionality, enabling the engine to quickly restart even during its rundown phase to allow the driver to, for example, exploit a gap in traffic at a junction. An illuminated 'ECO' symbol appears on the Instrument Panel when the engine has been stopped by the system. Stop-Start can be turned off manually, but it will automatically be turned on again for the vehicle's next journey with every ignition cycle. The system operates in all modes apart from Reverse.

The XF R-Sport has a secondary battery fitted specifically for engine re-starting, meaning that all the normal car systems - such as the entertainment system, the ventilation and lights - continue to receive power from the standard car battery and are unaffected by the re-start. In addition, a complex control system ensures that the Stop/Start operation only occurs when the car does not require the engine for other functions.

Launched in 2008, the XF introduced a coupe-like profile to the sporting saloon template and received plaudits worldwide for its seductive combination of dynamics, performance, quality, design and luxury. A saloon with the soul of a Jaguar sports car, the XF has won accolades and enthusiastic fans across the globe for its dynamic abilities and dramatic looks.

The 2014 XF R-Sport model features a Sport front bumper, 'R' style side sills and a unique rear spoiler which combine to give the car an assertive, purposeful appearance on the road. 17" Ursa alloy wheels, fitted with 17" low rolling resistance tyres to help further reduce emissions, add to the XF R-Sport's sporting profile, as do the optional Black styling packs which lend the car additional on-road presence. The R-Sport interior features a new charcoal on charcoal interior, including Suedecloth seats available with contrast stitching in either Dove, Tan or Red. The interior is further complimented with a selection of Dark Oak, Piano Black or Carbon Fibre veneers to choose from. A Jet Morzine headlining comes as standard while a Dove headliner is available as an option and also for when a sunroof is specified. There is also the option of upgrading to a Jet Suedecloth headlining. Bright stainless steel foot pedals and unique badging for the side power vent and the steering wheel set off the XF R-Sport's purposeful intent. Gloss black window surrounds are standard for the XF R-Sport while an extended black pack is also available which includes full gloss black grille surround, gloss black lower bumper inserts, gloss black trunk lid finisher and gloss black roof rails for Sportbrake. 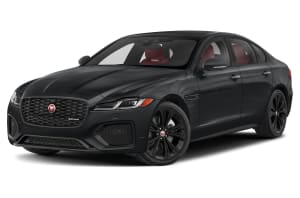 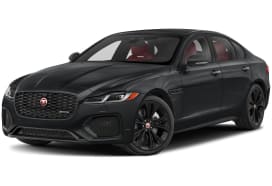